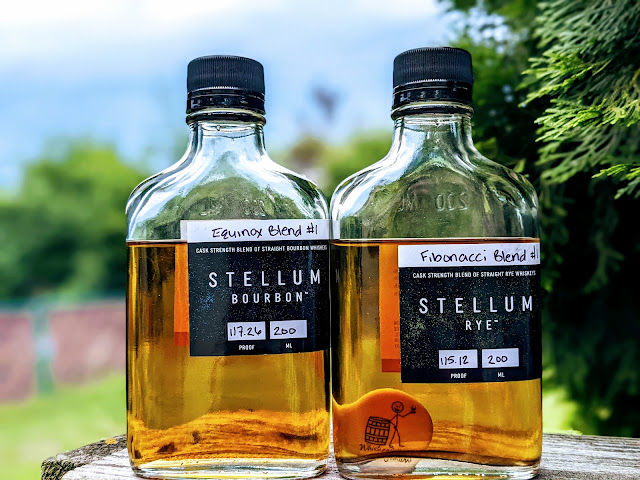 Stellum Spirits is a kinda-sorta new-to-market brand. In 2021, it introduced its line of whiskeys to the world. However, there was a certain familiarity to it, and that’s because Stellum is part of the Barrell Craft Spirits portfolio.

Barrell Craft Spirits is known for sourcing whiskeys, blending them, and bottling them at cask strength. There’s no such thing as low-proof whiskeys out of the company. It is located in Louisville, Kentucky, and typically finds whiskeys from Indiana, Tennessee, and Kentucky, although there have been some from Wyoming and Canada. Aside from usually producing excellent whiskeys, I appreciate the transparency it provides. That transparency allows me to do detective work to determine who the source distillers are.

Stellum Spirits is the more affordable brand for the average whiskey drinker. Quality isn’t lost, and Stellum has received its fair share of accolades, including from me. While Barrell Craft Spirits has its Gray and Gold Labels to denote rare offerings, Stellum has its Black Label line.

Today I’m tasting two of the newest Black Label whiskeys: one is a Bourbon called Equinox Blend #1, and the other is an American Rye called Fibonacci Blend #1. These are the inaugural whiskeys in its brand-new Specialty Blends line.

“Stellum Black specialty blends evoke the familiarity of two classic styles of American whiskey, taken one step further through our innovative blending and tasting process. Each limited-release blend has an alternate blending profile that incorporates reserve barrels from our stocks with the original Stellum blend.” – Joe Beatrice, Founder

I must thank Stellum Spirits for providing me a sample of each whiskey in exchange for a no-strings-attached, honest review. Now, it is time to #DrinkCurious and taste how they each fare. 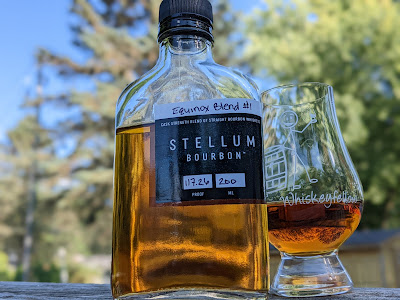 This Bourbon began with Stellum Black Label Bourbon, then the folks at Stellum layered other Bourbons from “rare” (read: older) casks, one at a time, until the Vernal Equinox (hence its name). The idea was to celebrate the change of seasons.

The core Bourbon blend comes from MGP, George Dickel, and Jim Beam. Of those, there are three MGP components: two are high rye with 60% corn, 36% rye, and 4% malted barley, and the other 99% corn and 1% malted barley. The Beam and Dickel components are undisclosed but older than the MGP. The additional, older stocks are from Beam and Dickel.

The result is a 117.26° Bourbon, about eight points higher than the original Stellum Black Label. It is non-chill filtered and carries no age statement. You’ll pay approximately $99.00, which is available in 48  of the 50 states.

Appearance: Poured neat in my Glencairn glass, the Equinox Blend looked like burnt umber. It created a medium-thin rim that generated heavy tears, which crashed into the pool.

Nose:  A fruity blast of cherry and plum greeted my nostrils. Nutmeg and toasted oak combined with vanilla and cinnamon. Maple syrup and orange zest filled my mouth as I inhaled the vapor.

Palate:  I encountered a warm, slightly oily texture that demanded my attention. The first thing I found was cinnamon, apricot, and nutmeg. The spice started building with clove and was joined by candied orange peel and vanilla at the middle.  Oak tannins, caramel, and old leather tied things up on the back.

Finish:  Medium in duration, the leather, caramel, and clove notes stuck around. Then, the oak reanimated with a kiss before vanishing almost as quickly.

Bottle, Bar, or Bust: I know the idea was to fold layers of flavors into this whiskey, and Stellum certainly accomplished that task. The front, middle, and back went from spicy to sweet to something transitionary. I won’t say that I’ve never come across that before, but it is an unusual journey.

As I stated in the Palate notes, that first sip grabs you by the shoulders and stares directly in your eyes. I wasn’t convinced the Bourbon would get my stamp of approval. But, once the shock to my palate ended, those additional ones became more and more enjoyable, and eventually, I couldn’t wait to refill my glass. The price notwithstanding, Equinox takes my Bottle rating. 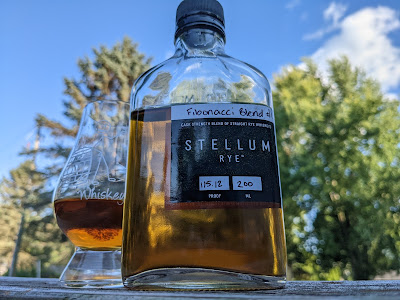 Next up is the Rye, which is called Fibonacci Blend. I’m not a mathlete, far from it, but the name refers to the Fibonacci sequence, a series of numbers that come from the sum of the previous two numbers. To me, that’s just weird because something has to start first – there is a reason I write versus engaging in number stuff (although I have been known to count to ten without using my fingers).

Fibonacci, unlike Equinox, is a marriage of six different American Rye blends based upon the Fibonacci sequence. Even stating it, I still have a rough time wrapping my head around it. Whatever. You’re here to read about this whiskey, not to have a reject mathematician drone on and on. The source materials are undisclosed, but you can bet MGP, Dickel, and Beam were involved.

Appearance: The liquid appeared as a bright orange-amber in my Glencairn glass. A microthin rim released heavy, wavy legs.

Nose:  Toasted oak, almond, and tobacco notes were easy to pluck from the air. Less obvious were nutmeg and orange citrus. As I drew the air through my lips, vanilla took over. Strangely, I found no evidence of floral or spicy rye in the nosing experience.

Palate:  An oil slick hit my tongue, and this is where the rye content introduced itself with mint. That was joined by honey and vanilla to complete the front. The middle consisted of cinnamon and orange zest, while the back featured clove, cocoa, and old, dry oak.

Finish:  Once the liquid was gone, the dry oak was pronounced. I had to wait a couple of minutes before I found flavors of ginger, clove, rye spice, and cinnamon. The finish kept going like the Energizer Bunny, sucking the moisture from my mouth.

Bottle, Bar, or Bust:  The inaugural blend of Fibonacci is mysterious. While the Equinox grew on me, I was more involved in trying to dissect the Rye and spent less time simply drinking it. You absolutely must enjoy spicy whiskeys as I do to consider it. Fibonacci is what I might describe as a thinking person’s whiskey. I believe that in and upon itself earns the admission for a Bottle rating.

Epilogue:  If I was standing at a liquor store looking at both bottles and wondering which to buy, both are very good, but Equinox would get my money. Cheers!