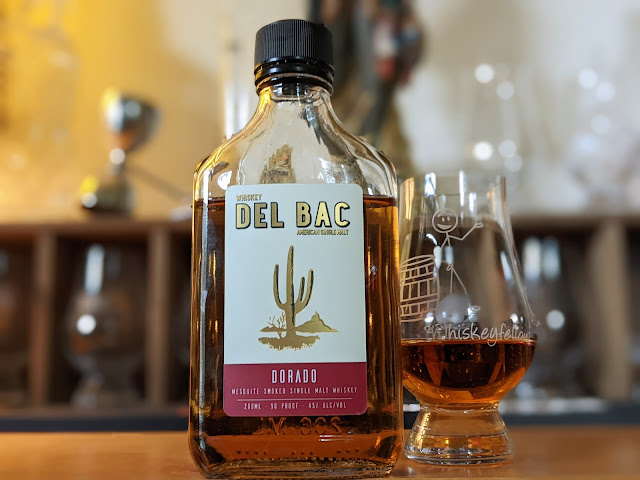 I get on whiskey kicks. Sometimes, it’ll be Bourbon and Rye. Other times, it could be Scotch or Irish. Lately, I seem to hone in on American Single Malts. I find the category fascinating because while it is currently undefined, there is a ton of creativity going into it while lobbyists are trying to have the category defined legally.

One of the American Single Malt category players is Whiskey Del Bac. It is distilled and aged at The Hamilton Distillery in Tucson, Arizona, where temperature swings can vary 40 degrees in a single day. Whiskey Del Bac also uses 15-gallon barrels versus the standard 53-gallon used for much of the American whiskey universe. When you marry those two facts, an accelerated aging process is achieved.

A few weeks ago, I reviewed The Classic from this distillery. I loved it, and I am not someone who typically appreciates American whiskey aged in small cooperage.

Today I’m sipping Dorado.  It is similar to The Classic, except the malting process occurs over a fire using velvet mesquite, a type of tree native to Southern Arizona, before going through the distillation process. Dorado is non-chill filtered, naturally colored, and carries no age statement, making it at least four years old. A 45% ABV (90°), 750ml bottle costs about $60.00.

Although my bottle was very recently acquired from a friend, Whiskey Del Bac’s website suggests this is 46% ABV. I ran into the same conflict with The Classic. I attempted to get clarification from Whiskey Del Bac, but the distillery did not respond to my request.

Will Dorado be another winner? The only way to know for sure is to #DrinkCurious. Let’s get to it, shall we?

Appearance: Poured neat into my Glencairn glass, Dorado was as orange as amber gets. A medium rim formed, which released thick, fast legs.

Nose: As you would imagine, the first smell that hit my nostrils was mesquite smoke. However, with effort, I also found vanilla, strawberry, and some sort of citrus. When I pulled the air into my mouth, the citrus revealed itself as orange peel.

Palate:  I encountered a thick, creamy mouthfeel, while the front of my palate tasted of grilled meats and orange peel. The middle had notes of berries and vanilla, while the back tasted of leather, clove, and nutmeg.

Finish:  You might wonder where the mesquite went. Never fear; it was all over the finish and complimented the black pepper, old leather, and orange peel.

Bottle, Bar, or Bust: One might be wary of grilled meat transitioning to vanilla. If I had read those notes, I would have wrinkled my nose. Believe it or not, it worked. I was expecting mesquite on the palate and was surprised it was missing. I poured myself a second glass to make sure I didn’t misread things, but, no, it was only regulated to the finish. I found Dorado to be unusual in a good way, I appreciate what Whiskey Del Bac did with this single malt, and I’m happy to report it deserves a Bottle rating. Cheers!