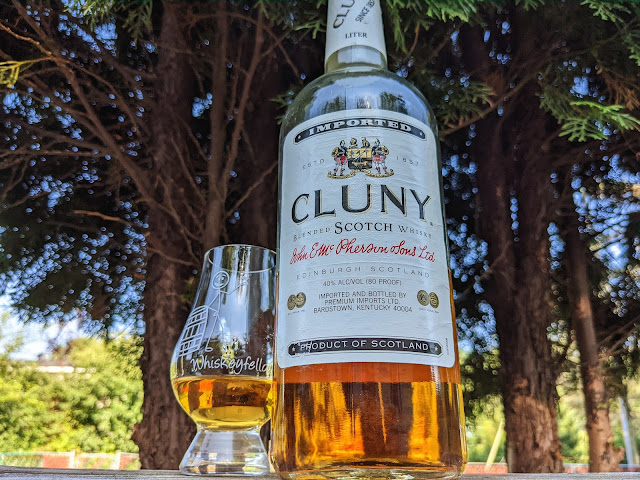 When Dad passed away in June, I was charged with going through some boxes in his office. There were boxes and boxes of old photos, books, client files, financial statements, etc. But, there were also three boxes tucked away in the back. I opened them, and lo and behold; they contained booze. Much of what was there was wine, but there were a few bottles of gin and a few of whisky.

Dad was not a whisky drinker. He was into gin, wine, and beer. I tried for several years to talk to him about whisky, which he found interesting, but had no desire to drink it. I think it is safe to assume the whisky I found was for friends who may have wanted a pour. It is funny, though, that he never offered me one. Of course, his dementia may not have allowed him to remember he had any on hand in the last several years.

One of the bottles I came across was Cluny. It was interesting because it was a fairly nondescript label, and I’d never heard of it. I knew it couldn’t have been too old; it had a UPC label on the necker and a laser code on the bottom that suggested it may have been bottled in January 2007.

I spent some time researching this whisky and became even more curious. I saw this statement repeatedly, obviously written by marketers:

“Cluny Scotch Whisky is one of America's top-selling domestically bottled blended Scotches, made up of a marriage of over 30 malt whiskies from all regions of Scotland and the finest aged grain whiskies. Cluny's high malt whisky content gives it a richer flavor and superior taste to like-priced competitors, making it one of the best overall values in the Scotch category today.”

Cluny has been around since 1857, or roughly 165 years. And according to the quote above, it is one of America’s top-selling blended Scotches. So, why am I finding little-to-no information online about it?

I can verify that Cluny is still in production, as a variety of websites offer it for sale for around $11.99 for a 1000mL bottle. I confirmed with a friend who owns one of Wisconsin’s largest liquor stores that while he’s never heard of Cluny (I’m asking this a second time:  Isn’t this supposed to be one of the top-selling blended Scotches in the country?), he can order it.

The brand is owned exclusively by John E. McPherson & Sons; however, in their most recent filing with UK authorities, it had assets of 1 GBP. The label stated it was imported and bottled by Premium Imports out of Bardstown. That’s a subsidiary of Heaven Hill, but Cluny is not listed as one of its brands. Liquor brands are bought, sold, and traded all the time, so someone else may have it.

The one thing that left me dumbfounded, however, was the lack of reviews. That forces me to inquire a third time: Isn’t this supposed to be one of the top-selling blended Scotches in the country? Indeed, if it is that high-profile, there would be many reviews, right?

“Legend has it that the wild cat was the totem of tribes who settled the north of Scotland from Europe. These ‘cat people’ later became the Clan Macpherson, whose crest shows a seated wild cat, its claws extended. The motto ‘Touch Not The Cat Bot A Glove’ means do not touch an ungloved cat, an apt slogan for a fearless clan.

A Scotch worthy of its heritage, Cluny epitomizes the proud Scottish tradition of high quality and distinctive taste. Artfully distilled, aged for thirty-six months, and blended skillfully of the highest-caliber malts and grains.” – Cluny Scotch (from the back label)

I do love a good mystery, and this one has me stymied. The only things left to tell you are it is packaged at 40% ABV (80°), and, per the label, in 1895 and 1899, it won gold medals in some competitions that my old eyes can’t make out. I’m not sure those medals are something I’d brag about, but let’s get this #DrinkCurious thing done and hammer out a review.

Appearance: As a neat pour, this Scotch presented as brassy. I’m assuming there is e150A involved in enhancing its color. A bold rim formed on the wall, releasing fat, wavy tears that fell back into the pool.

Nose:  A sweet aroma escaped the neck of the glass, smelling of honey, apple, and nutmeg. Taking the air into my mouth, I experienced vanilla.

Palate:  A watery texture greeted my tongue. There was a blend of dried apricot and golden raisin on the front, with vanilla controlling the middle. The back tasted of honey and nutmeg.

Finish:  Cinnamon and toasted oak remained in my mouth, with something medicinal (not astringent) as the other two flavors faded.

Bottle, Bar, or Bust:  Cluny is an unremarkable whisky, which probably helps explain its longevity. It isn’t bad, but there’s also nothing memorable about it. I can’t say I’ve had a better $12.00 Scotch, but I also can’t say that, until now, I’ve ever had a $12.00 Scotch. I could see this being an attractive rail pour at a Bar, which is what I’ve rated it. Cheers!