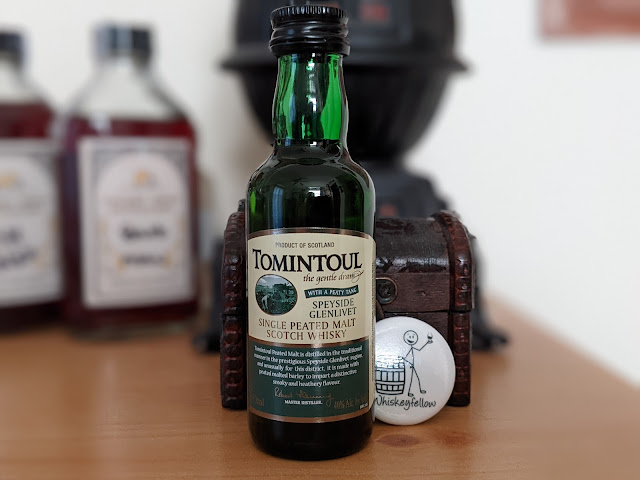 Some people are not fans of peated whiskies. I’ve been there myself. It took me years to wander into the land of smoke after I was introduced far too early to Lagavulin 16 as an entry point. But, once I was ready, I did things slowly – the right way – and fell in love with smoky peat.

I’m at the point where I see a peated whisky I’ve never tried, and it cuts to the front of the line of everything else I’ve queued. One such whisky is Tomintoul With a Peaty Tang single malt Scotch.

Tomintoul calls itself The Gentle Dram. It is a Speyside distillery founded in 1964 and is located on The Ballantruan Spring which runs through the Glenlivet Estate. The name comes from the highest village of the Scottish Highlands. Like most Speyside distilleries, Tomintoul is known for unpeated whisky. However, twice a year, it uses peated malt. It is owned by Angus Dundee.

Tomintoul “With A Peaty Tang” has been made with peated malt barley to give it a deep smoky flavour. This makes “Peaty Tang” very unusual, most distilleries in the Speyside region do not use peat.” – Tomintoul Distillery

With a Peaty Tang is a marriage of peated whisky that’s been aged between four and five years with unpeated whisky aged eight. Ex-Bourbon casks were used for both. This is a fairly new whisky for this young distillery – it was introduced in 2017.

How’s this one fare? The only way to find out, of course, is to #DrinkCurious. Let’s do this!

Nose:  I could smell the peat the second I cracked the bottle. I let this one sit for almost 20 minutes as campfire smoke filled the room. Once I determined it rested enough, I brought the glass to my face, which usually results in an ability to get through the peat (because at that point I’m used to it). Nope. Campfire smoke was still dominating. Eventually, my olfactory sense cut through it and found citrus, apple, honey, and caramel. I then inhaled through my lips and smoky vanilla rolled across my tongue.

Palate:  The mouthfeel was thin and airy and, despite the alcohol content, warming. The front featured heavy peat, brine, and malted barley. The middle became earthy and fruity with mushroom, pear, and vanilla. The back got super spicy with clove, black pepper and a big blast of burnt oak.

Finish:  Medium and dry, barrel char, clove, dry oak, and vanilla stayed for the encore. And then, without warning, a wave of astringent.

Bottle, Bar, or Bust:  Tomintoul With a Peaty Tang was similar to a low-end Islay, except with less complexity. I can usually find something nice in those Islay whiskies, I struggled with this Speyside. I initially didn’t find the Band-Aid flavor until after my fourth sip, then couldn’t get it out of my mouth. Some astringent is fine. Bold astringent is not (but it does have its fans). There was nothing gentle about this dram. I am willing to try other things from Tomintoul. I would never drink its With a Peaty Tang again. This takes a Bust. Cheers!