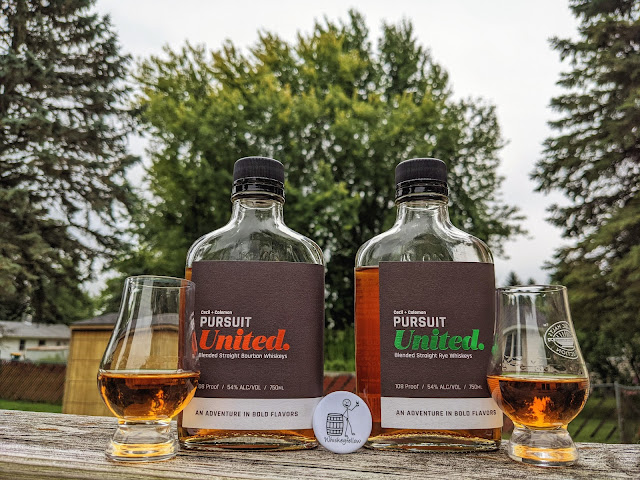 Some people think those who have podcasts can’t do anything with them, and for the most part, they’re correct. So many fall by the wayside, only garnering a few followers. But the ones who do it are passionate about their podcasts and have a good time, and that’s all that matters, right?

Then you have those who do big things with their podcasts. There is one called Bourbon Pursuit which has been around since March 2015. Founded by Kenny Coleman and Ryan Cecil, they’ve been very successful. In 2018, they formed a company called Pursuit Spirits, which sourced Straight Bourbons and Ryes to create its blends. The first release, in 2021, was a success, and Pursuit Spirits is following up with a second.

To help differentiate batches, Pursuit Spirits has come up with a labeling system with a 3- or 4-digit code. The numerical portion refers to the month. The alphabetical part represents the year, with “A” representing a zero. Thus, the current batch is 7CC for July 2022.

Pursuit Spirits has also dropped the age statement on the bottles because everything in the blend is now at least four years old. The Rye is a corn-heavy mashbill meant to appeal to Bourbon drinkers and comes from Bardstown Bourbon Company and Sagamore Spirits, while the Bourbon has a rye-heavy mashbill containing a blend of distillates from Bardstown Bourbon Company, Finger Lakes Distilling, and an undisclosed Tennessee distillery that is not George Dickel. Each 108°, 750ml package runs $65.00, and both are distributed to stores in CO, GE, IL, KY, NM, OH, TN, TX, and online at Seelbachs.com.

Before I get to the tasting notes and ratings, I must thank Pursuit Spirits for providing me samples in exchange for no-strings-attached, honest reviews. Now, let’s #DrinkCurious and learn more. 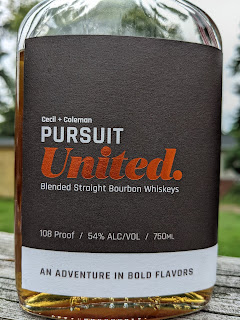 I’ll start with the Bourbon because when I have to review both Bourbons and Ryes together, and the proofs are the same, Bourbons are generally less spicy.

Appearance: I drank this Bourbon neat from a Wee Glencairn glass (a smaller version of a common Glencairn). It was the color of caramel and created a thick rim with fast legs.

Nose: A bouquet of corn, caramel, candied orange peel, cinnamon, and toasted oak wafted from the neck of my glass. It was like a vanilla bomb exploded when I pulled that air into my mouth.

Palate:  This whiskey had a light, silky mouthfeel, which introduced me to flavors of cinnamon, corn, and vanilla on the front of my palate. The middle offered rye spice, almond, and mocha, while the back tasted of black pepper, leather, and dry oak.

Finish:  A medium-long, warming, and somewhat tingly finish was a blend of cinnamon, rye spice, and toasted oak.

Bottle, Bar, or Bust:  The Bourbon was nice, yet not something that would stand out from the crowded field of others that cost $65.00. To me, the nosing component was the best part of the experience. I recommend buying yourself a pour of Pursuit United Bourbon at a Bar before committing to a full bottle. 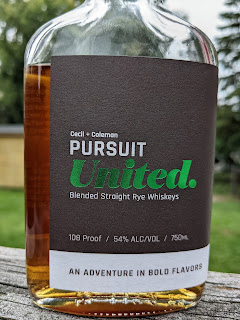 Next up is the Rye. It, too, was sipped via a Wee Glencairn glass.

Appearance: I found the color only a shade darker than the Bourbon. It was still caramel in color; however, it formed a much thinner rim which yielded slow, wavy legs that fell back to the pool.

Nose:  Aromas of mint, vanilla, brown sugar, and toasted oak made it to my olfactory sense. The toasted oak rolled across my tongue when I inhaled through my mouth.

Palate:  An oily, full-bodied texture led to vanilla, brown sugar, and caramel on the front of my palate. It was as if each flavor marched one by one and faded as the next approached. The middle tasted of baked apples and pears, along with fresh ginger. The back was spicy with cinnamon, wintergreen, and clove.

Finish:  The finish was much longer than the Bourbon, and while vanilla was part of the equation, the remaining notes were spicy with wintergreen, ginger, and clove.

Bottle, Bar, or Bust: To get the question out of the way, I preferred the Rye to the Bourbon. It had more character, there were bold flavors to be savored, and it wasn’t simply another play on a 95% rye, 5% malt that is dominating the market these days. I believe you’ll enjoy Pursuit United Straight Rye, and I am happy to say it earned its Bottle rating. Cheers!