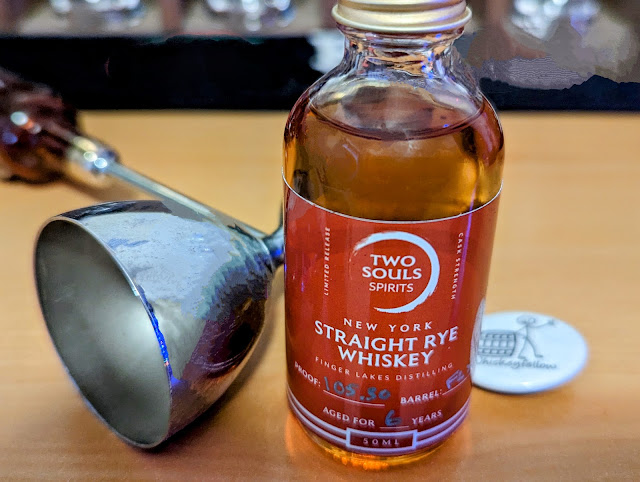 Two Souls Spirits is part of the newish breed of American independent bottlers. I’ve talked about what that means several times, the most recent was last December with my review of its 8-Year Rum Finished Wisconsin Rye.

Finger Lakes Distilling was founded in 2007 by Brian McKenzie. The distillery is known for its McKenzie Straight Rye Whiskey that, incidentally, I reviewed back in 2020. I found a three-year, 91° whiskey aged in quarter casks rather unique in taste.

The New York Straight Rye Whiskey that Two Souls Spirits procured comes from the same mashbill of 80% rye and 20% malted barley. Barrel #1927 was exposed to a #4 char level, then filled at 100° on December 15, 2015, and rested until November 17, 2022. While that’s just shy of seven years, legally, it must carry a six-year age statement. On a side note, that entry proof is ridiculously low compared to what most other distillers use.

As someone who appreciates a good sense of humor, I commend Two Souls Spirits for their serving suggestion:  Open, pour, sip, contemplate the fabric of our existence. Before I do that, I want to thank them for providing me with a sample of this Rye in exchange for a no-strings-attached, honest review.

Appearance: I sipped this neat from my Glencairn glass. Inside, it presented as light copper. A wavy curtain dropped from the thin rim created on the wall of my glass.

Nose: The aroma of apple pie filling jumped at me, followed by banana pudding. While those things don’t seem like they’d go well together, they weren’t a turn-off. Caramel apples rolled across my tongue when I drew the air through my lips.

Palate: An oily, full-bodied mouthfeel introduced my palate to a bold cinnamon flavor matched with caramel apple. Midway through, I tasted nutmeg and clove. Then, as it moved to the back of my mouth, I encountered charred oak, shredded tobacco, and vanilla cream.

Bottle, Bar, or Bust: I don’t recall my exact experience with McKenzie Rye, but as I said in the introduction, it had a unique taste. The same goes for the single barrel that Two Souls Spirits selected. Things that shouldn’t work did, and that was on both the nose and palate.

If you’re game for an off-the-beaten-path sipping experience, this New York Straight Rye Whiskey is sure to please. I enjoyed it. I believe you will, too, and such, this one earns my Bottle rating. Cheers!