If you are still knee-deep in the chase for the Buffalo Trace Antique Collection or anything Van Winkle, you may have missed the accolades received for Old Ezra 7 Year Barrel Strength Bourbon. In fact, I reviewed it back on October 17th, before the hype on that began. And, while I did rate it a Bottle, there is another version out there, albeit discontinued, that is still readily available and quite affordable: Ezra Brooks 7 Year 101° Bourbon.
Ezra Brooks is produced by Luxco, now known as Lux Row Distillers. Produced means that they didn’t do the actual distilling. Instead, they sourced whiskey from Heaven Hill. That’s fine, there’s nothing in the world wrong with sourcing, just so long as there’s no deceit involved on the label. The mash bill is created from 78% corn, 12% malted barley, and 10% rye. If the label didn’t give the hint, it is seven years old and bottled at 101°. It retails for right around $20.00.
While I loved the Barrel Strength version, and have been a fan of the (also) discontinued 12-year Ezra B, I’ve never had the 101° release until now. Is this an opportunity to #RespectTheBottomShelf, or will this be a dud? Time to #DrinkCurious and find out…
In the glass, this was a lighter-colored amber than I would have suspected, both from a proof and age point of view. The color most resembled citrine. Against the wall of my Glencairn, it created a thin rim that generated fat, wavy legs that were in no rush to get back to the pool of liquid sunshine.
A wave of caramel hit my olfactory senses even while still at arm’s length. As I brought the glass through my nosing range, vanilla and berry enticed. There was a bit of oakiness, but again, not amounts that I would have expected. What was missing was any hint of ethanol. When I inhaled the vapors through my lips, the caramel was king.
The mouthfeel had me again questioning how this could be 101°. There was just no burn. It was, however, thick and coating while it ran over my palate. Up front were vanilla and oak, which dominated everything that followed. I picked up orange slice candy and at that point, the mouthfeel became creamy. Behind the orange was a drier oak, clove and dark chocolate.
A deceptive medium finish held onto the front of the palate. This is where the oak disappeared. Vanilla remained along with that dark chocolate. I waited about two minutes before the clove snuck up and proved how long the finish continued.
Bottle, Bar or Bust: There is a big difference between Old Ezra 101° and Old Ezra Barrel Strength. Sixteen points is a big deal, so much so that the Barrel Strength is about twice the cost. I see Old Ezra 101° on the shelves despite being discontinued, but at some point, that’s going to change. I found this Bourbon to be very enjoyable and full of surprises, and for the money, this is a definite Bottle. Grab it while you can.
Posted by Whiskeyfellow at 9:58 AM No comments: 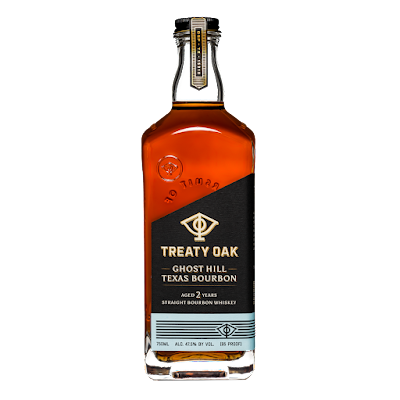 Recently, I reviewed Treaty Oak’s Red-Hand Rye. I mentioned how impressed I was with the transparency provided. However, with the Rye, I was left confused and stated, “if you poured this for me completely blind, I couldn’t tell you what kind of whiskey I was drinking.”

I was provided with additional samples of Treaty Oak’s whiskeys, including their own grain-to-glass Ghost Hill Texas Bourbon Whiskey. As before, I thank Treaty Oak for the opportunity to provide an honest review of their whiskeys with no strings attached.

Ghost Hill Texas Bourbon is created from heirloom grains from Barton Springs Mill.  The mash is made of 57% yellow corn, 32% wheat, and 11% barley. Everything from mashing to bottling is completely handled start-to-finish on premises and aged two years in new, #3 charred American white oak barrels. It is bottled at 95° and retails for $49.99 which is right at the average for American craft whiskey.

Currently, Treaty Oak distributes its products in Texas, Georgia, Florida, Illinois and the District of Columbia. They do hope to increase distribution as the distillery grows. Is Ghost Hill Texas Bourbon worth checking out?  Time to #DrinkCurious...

In my Glencairn, the color was a darker amber than I expected from a two-year whiskey. It left a thin rim on the glass that produced slow, fat legs to drop back into the pool of Texas liquid sunshine.

The first aromas to hit my nose were fresh sawdust and cherries. As I perused through my nosing zone, smoked oak and vanilla took over but yielded once again to the cherries.  An obvious maltiness was in the upper zone. Inhaling through my lips was a strong fruitiness that made my mouth water.

A thin and watery mouthfeel created an almost déjà vu situation. Just like the Red-Hand Rye, my thought was, “What am I drinking?” But, that was the first sip, and as I always recommend, never, ever judge anything on that sip. An additional sip revealed the same watery mouth, and I was able to start discerning flavors. Sweet corn was absolutely up front, however, it was mellowed by the wheat. Behind that, a light fruit, followed by a muted chocolate. Underneath the chocolate was dry oak and bold spiciness, which could cause one to review the mash and look for non-existent rye.

The finish was shorter than I would imagine, especially considering how quickly the spice built at the end. I typically enjoy whiskeys at higher proofs, and 95° is not a big deal. However, my hard palate was left tingling just a smidge.  There was also a residual smokiness that was reminiscent of peat.  If you’re not into Scotch, peat can be shocking to the palate. Peat is so unusual with Bourbon that whenever it does come up, it is a curiosity. I must stress that the peatiness is very, very slight.

Bottle, Bar or Bust:  Ghost Hill Texas Bourbon Whiskey hits an attractive quality with me, meaning, it is unique and not another me-too MGP product. That’s a good thing for craft whiskeys. A peated finish, even ever-so-slight, is something that will attract Scotch aficionados and can risk turning off those who haven’t experienced it. I was a Scotch drinker way before I ever tasted my first Bourbon, and as such, I look to it as a positive quality.

Posted by Whiskeyfellow at 1:05 PM No comments: 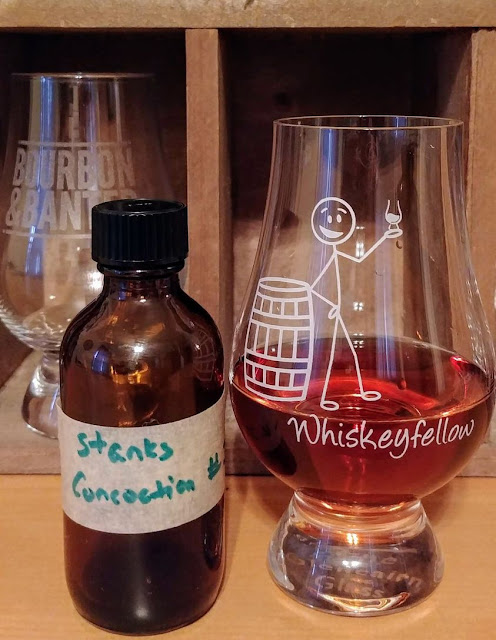 What’s an Infinity Bottle? If you’ve never heard the term, the most straightforward explanation is it is a homemade blend of various whiskeys. Typically, people pour an ounce or so of whiskey into a bottle and repeat the process. Some people wait until the bottle is full, while others sip it as they add to it and taste how each addition changes the taste.
Several months ago, I was invited to taste from a friend’s Infinity Bottle. I honestly didn’t expect much and was shocked to find it was one of the best whiskeys I’d tasted. Stank (his nickname) of the Janesville Bottle Club told me he had everything from BTAC to Van Winkles and other fine Bourbons and Ryes in that batch.
One thing I do know is Stank’s approach to Infinity Bottles is different than many. Most folks pour the last remnants of their bottle and add that to the Infinity Bottle. Stank cracks open bottles and adds fresh pours. This methodology means less oxidization in the whiskeys as they enter the Infinity Bottle.
About a week ago, Stank asked me if I’d review his newest Infinity Bottle, which he aptly named Stank’s Concoction #2. Always up for a challenge; I thought it would be fun. And although this is a fun experience, this is a genuine review. Thank you, Stank, for this unique opportunity. Fingers crossed, and time to #DrinkCurious.
Appearance: This whiskey’s appearance is very dark, one of the darkest ambers I’ve come across, leading me to believe there are several well-aged, barrel-proof whiskeys in the mix. I’ve got George T. Staggs and Elijah Craig Barrel Proofs that aren’t this deep! I could not get anything beyond the thinnest of rims to leave on the wall of my Glencairn. However, gravity forced some fat droplets that stuck into place, again suggesting something higher proof.
Nose: The nose was much softer and muted than I would assume from its appearance. It made me wonder if that suggested several wheaters were used. As I sniffed in the various nosing zones, I picked up caramel, oak, cinnamon, cherries, and candied fruits. The closer to my nostrils, the sweeter it became, with almost a brandy quality. Inhaling through my mouth added vanilla.
Palate: A very thick liquid coated my tongue and dispersed through my mouth. It became substantially thinner as it moved to my throat. Up front, the palate was full of various flavors, including coffee, red berries, and caramel. Behind that was cinnamon spice, black pepper, and clove, which led to the caramel coming back full circle. That caramel again gave way to the clove, which morphed into oak and pepper.
Finish: That oak hung around the longest on the finish. Pepper and clove alternated with sweet berries, but the oak remained constant.
I have some suspicions as to what’s in this Infinity Bottle. Of course, as it is all blended together, I have no way to know for sure, but I’d bet Elijah Craig Barrel Proof is one of the whiskeys. I’d suspect Blackened (Dave Pickerell’s final project) because of the brandy-like quality. EH Taylor Barrel Proof or a Stagg Jr (or perhaps both), considering all the berries.
Bottle, Bar, or Bust: This isn’t really relevant but were this for sale, I’d be interested, depending, of course, on the price. There was so much going on that I could invest many pours trying to figure it out. At the same time, I will say that I remember Concoction #1 as being better than Concoction #2.
And, as a closing note, I started my own Infinity Bottle after tasting Concoction #1. I’m doing mine more traditionally, using the last ounce or so of a bottle. But I’m using only Bourbons and only those I deem excellent. Time will tell if I’m doing this right. Cheers!
Posted by Whiskeyfellow at 5:39 PM No comments: