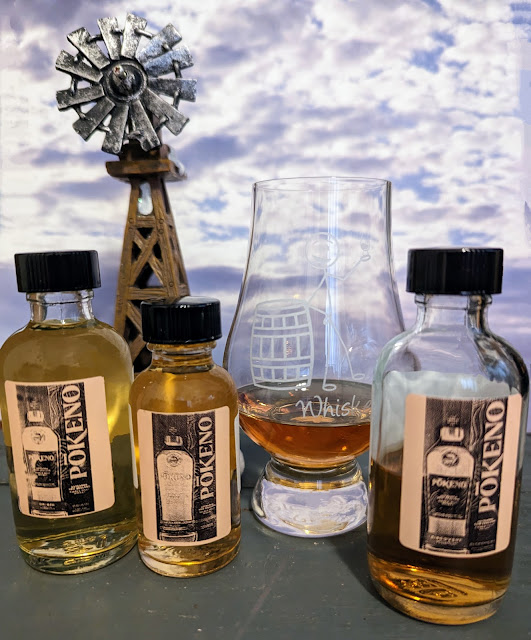 One of the most beautiful places on Earth is New Zealand. In November 2000, I spent two weeks mountain biking and ocean kayaking on the South Island. The Kiwis, whether Maori or of European descent, were some of the friendliest people I’ve met. There was also quite a bit of culture shock, especially on the culinary side. I remember exploring a winery. Whisky wasn’t even on the radar at that point in my life.

I’ve seen a few New Zealand whiskies cross my social feeds, but I’ve never had a chance to see one at the liquor stores I visit, let alone taste one. But, due to the kindness of ImpEx Beverages, that changes today.

Pōkeno Whisky Company was founded in 2017 by Matt and Celine Johns. The distillery is located on the nation’s North Island, just south of Auckland. It is the largest single malt distillery in the country. Johns chose the town of Pōkeno for its high-quality volcanic water. Its license was granted in 2018, and in 2019, production began using barley grown on the South Island. The distillery has an on-site cooperage to handle barrel-making and repairs.

According to distiller Rohan McGowan, Pōkeno opted to wait at least 3 years and a day to follow Scottish rules of whisky-making. It wasn’t until last year that the first bottles were available.

Today I will #DrinkCurious with New Zealand Single Malts from this distillery:  Origin, Discovery, and Double Bourbon Single Cask. Each whisky is three years old, non-chill filtered, and naturally colored.

So, thank you, ImpEx Beverages, for this opportunity in exchange for my no-strings-attached, honest reviews. 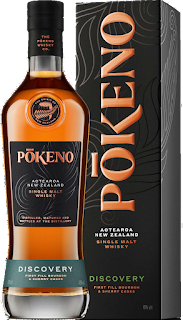 Before determining where something began, we must first be aware of it. As such, I’ve opted to start with Pōkeno Discovery. It is packaged at 43% ABV (86°). A standard-sized bottle runs about $74.99.

“First we carefully select and blend parcels of stock which have been fully matured in first fill bourbon, Oloroso and Pedro Ximenez Casks. We then lay these back down in cask to allow them to marry perfectly together.” – Pōkeno Whisky

Appearance: I sipped this single malt neat from my Glencairn glass. Inside, the orange-amber liquid formed a medium rim. Wide, slow tears flowed back into the pool.

Nose: A thick, fruity aroma escaped the glass’s mouth, consisting of raisin, plum, and black cherry. Beneath those, I smelled chocolate and honey. Inhaling through my lips enhanced the honey.

Palate: The mouthfeel was thin and oily. Chocolate, honey, and cherry notes were on the front of my palate, while the middle offered raisin, almond, and orange zest. The back tasted of mocha, oak, and old leather.

Finish:  Long and lingering, the finish is derived from citrus, nuts, raisin, and leather.

Bottle, Bar, or Bust: The sherry influence on this single malt whisky was unmistakable; I didn’t find many bourbon-ish notes. That’s perfectly okay because what I was tasting was simply enchanting. Yes, it is three years old; no, you won’t care. I’d put this one up against several lovely twelve-plus-year Speyside malts, and it would be a great night. I’m really looking forward to the other two. Still, regardless of how they perform, Discovery earns every drop of my Bottle rating. 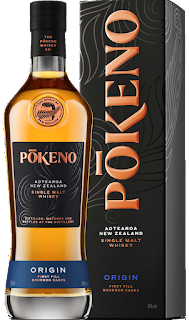 Once discovered, you can then search for how things began. The second whisky I’ll try is Pōkeno Origin. It is packaged at 43% ABV (86°). This whisky can be acquired for around $69.99.

“Pokeno Origin celebrates our unique place in the world. Produced from the finest local barley, and unrushed through fermentation and distillation to enhance body and flavour, we mature it only in first fill bourbon casks.” – Pōkeno Whisky

Appearance: Far lighter in appearance than Discovery, Origin could pass for a Fumé Blanc wine. The rim was thinner, releasing a mix of sticky droplets and husky legs.

Nose: I found the aroma sweet with orchard fruits such as pear, apricot, and apple. Pure vanilla rolled across my tongue when I drew the air in through my lips.

Palate: Unlike Discovery, the texture of Origin was creamy and weighty. The front of my palate experienced pink grapefruit, honey, and vanilla. I tasted almond, cashew, and English toffee mid-palate, while the back had oak, clove, and white pepper flavors.

Bottle, Bar, or Bust: The Bourbon influence was much easier to identify with Origin. I enjoyed what I tasted, although I immediately regretted trying it second, as it was overshadowed by Discovery. However, I had enough left over to try it on its own another day. This whisky goes down too easily; I can picture sipping this on my deck during a warm summer evening. It may be priced a tad too high, but even so, you’ll find it a pleasant, fruity pour. My Bottle rating is well-deserved. 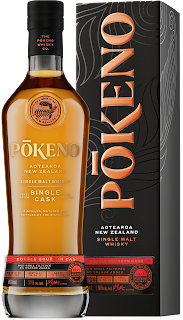 The final pour of the day is a single cask offering. I saved it last for two reasons. First, it is a higher proof:  56% ABV (112°). Secondly, it is a single cask, something that would be unique to even the distillery, and I wanted to come to this one with an open mind. The yield was 320 bottles, and from what I could find, the online price is $125.00 and is limited to the US market.

“After a full maturation in a first-fill bourbon barrel, we decided to re-rack this single malt into a fresh first-fill bourbon cask for 6 months. This unique technique has added incredible richness and depth to the whisky.” - Pōkeno Whisky

Appearance: That double-maturation process allowed this incarnation to have a slightly darker color than Origin. Thin, slow tears fell from a medium-thick rim.

Nose: Even before I got the glass to my nose, vanilla exploded from it, so much so that when I did, it was challenging to dig through it. Pear and apple, and then what I swear was coconut cream pie tickled my nostrils, and that last note carried through as I inhaled the vapor through my mouth.

Palate: A thin, oily mouthfeel sizzled the tip of my tongue. White grapefruit, lemon zest, and toasted coconut were on the front of my palate. The middle featured honey and dark chocolate, while the back formed peanut butter, toasted oak, and white pepper flavors.

Finish: The finish was wild with fresh coconut, lemon peel, vanilla, toasted oak, and dark chocolate that was a bit shorter than I had hoped.

Bottle, Bar, or Bust: Understandably, this was the smallest sample bottle of the three provided. That made me sad because I was getting lost in this pour. The price is a bit steep, but this is also a one-and-gone whisky you’ll want to get your hands on. The coconut, lemon, and dark chocolate will wow you, and you’ll be thrilled you grabbed a Bottle.

Final Thoughts:  Of the three, my favorite was Discovery. The sherry notes were spectacular. All three are worth grabbing; I’d rate them at Discovery, Double Bourbon, and Origin. Cheers!