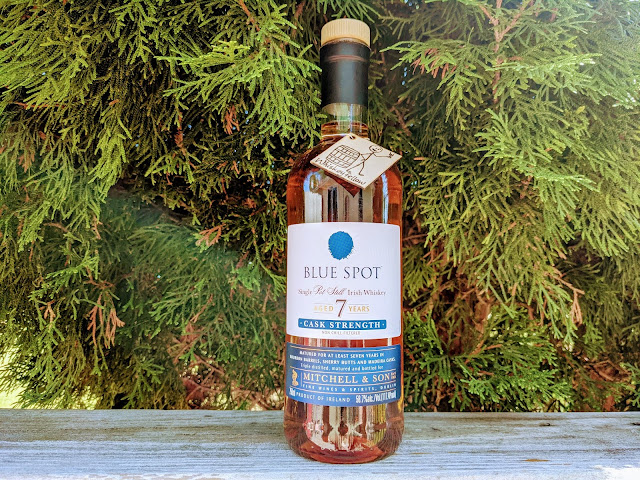 In 1803, William Mitchell declared that all of the firstborn Mitchell sons would be named Robert to honor the memory of his close friend, Robert Emmet. Many generations later, that demand has been honored to the present day. His bakery, Mitchell & Son, slowly expanded into other fields, such as importing wines from mainland Europe. Then, in 1887, it delved into bonding whiskeys. With a plethora of wine casks on hand, Mitchell & Son gained a reputation for taking Jameson distillate and aging it in fortified wine casks. It referred to this product as Spot Whiskey. His warehouse was a cellar, located beneath the streets of Dublin.

"When their fortified wine casks were filled exclusively with Jameson spirit from the old Bow St. Distillery, they were marked with a daub or ‘spot’ of paint which identified how long the barrels would be matured for. Blue for 7 years, Green for 10 years, Yellow for 12 years and Red for 15 years—hence the name Spot Whiskey." - Spot Whiskey

Blue Spot is the only one bottled at cask strength. It is a Single Pot Still Whiskey which means the mash is made from both malted and unmalted barley. To get into even more detail, any Single Pot Still Whiskey must contain both a minimum of 30% malted and 30% unmalted barley. Then, up to 5% of other cereal grains can be used. It must be distilled in a pot still, and Blue Spot was triple-distilled, which is the most common means of distilling Irish whiskey (the other option is double-distilled).  The single part of the category means that all the malt comes from a single distillery.

The distillate was then aged in ex-Bourbon barrels, ex-sherry butts, and ex-Portuguese Madiera casks. Spot Whiskeys are non-chill filtered. Blue Spot weighs in at a hefty 58.7% ABV (117.4°) and was distilled at the Midleton Distillery in County Cork. You can expect to pay right around $100.00, I picked mine up for $105.00. One last note, 2021 is the first time since 1964 that Blue Spot has been available for mass consumption.

I've given you a lot of background, but now it is time to #DrinkCurious.

Appearance:  Poured neat in my Glencairn glass, Blue Spot was the color of brass. It left a medium rim on the wall and fast, medium legs that crashed back into the pool.

Nose: The smell of fruits was simply delicious. Blueberry is my favorite fruit. Guess what? The explosion of blueberries into my olfactory sense was welcomed. Pineapple, banana, and citrus shined through. I also experienced a thick maltiness. When I drew the aroma into my mouth, I got more fruit - this time, apple.

Palate: The mouthfeel was thick and oily. It coated every nook and cranny of my mouth. Nutmeg, almond, cinnamon, and dark chocolate started things off. The middle offered orange, vanilla, raisin, and honey. On the back, I tasted caramel, oak, black pepper, and red wine.

Finish:  Thick, rich, caramel flavor dominated. Dark chocolate and leather were next, and the end was spicy with clove and black pepper. It was long-lasting and warming, but not anything that could be described as burn.

Bottle, Bar, or Bust: This is one dangerous whiskey. At no point did I recognize the proof. But, it sure recognized me. It came at me like a wave, I could feel the flush in my head. Despite that, I enjoyed every iota of Blue Spot. Is it worth $100.00? Yeah, it is. It also earned my Bottle rating, and if there was something higher, it would take that, too. Cheers!