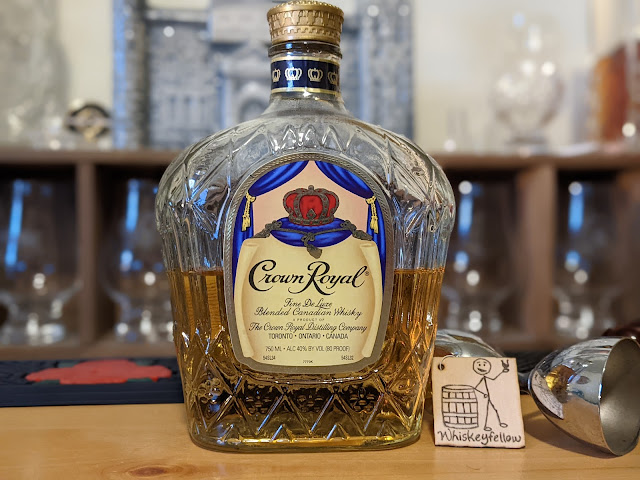 I have been a man on a mission for the last year. I’m determined to find a Canadian whisky that I could enjoy and recommend. So far I’ve come up empty, but I have a number of them in my whiskey library just waiting to be sampled.

I know there are a lot of fans of Canadian whisky, and in particular, Crown Royal. I’m prepared to take some flak with this review, as even my friend Lew Bryson, who I deeply respect, said earlier this week, that he enjoys Crown Royal with his Thanksgiving meal, and then tossed a friendly barb at anyone who hated it. His statement was the driver for me to taste and compose this review in time for Thanksgiving.

What is Crown Royal? Aside from being the standard-bearer of what Canadian whisky should be, it was established in 1939 as a means to commemorate the arrival of King George VI and Queen Elizabeth I, the first British monarchs to visit Canada. The blenders at Seagram's Waterloo distillery sampled some 600 different whiskies in an attempt to create the perfect representation. They managed to whittle it down to 50, and it is aged in a variety of cooperages, including new charred oak, vintage charred oak, and French oak.

A fun fact is that from 1939 until 1964, you could not purchase Crown Royal outside of Canada. The final result has remained mostly unchanged by design. It was originally owned by Seagram’s and then sold off to Diageo in 2001.

Some of the blends are single grain whiskies, some of it is a mix of grains. Regardless, all of the grains are sourced from Manitoba and surrounding provinces. It changes in a quest to keep consistency year-to-year, as grains change slightly each growing season. The whiskies are aged at least three years to comply with Canadian regulations. One of the components could qualify as Bourbon if it was made in the United States! Once matured and blended, it is packaged at 40% ABV (80°).  You can expect to pay about $32.99 for a 750ml bottle.

I’ve tried Crown Royal before, and I wasn’t a fan. However, it has also been several years since I’ve tried it. As many of us know, our palates tend to change over time, so I’m willing to #DrinkCurious and give Crown Royal another chance.

Appearance:  Served neat in my Glencairn glass, this whisky appeared as the color of golden straw. I have no idea if e150a has been added for coloring, but I’d suspect that’s not the case considering how light it is. It formed a medium rim which released a huge, wavy curtain that dropped back to the pool.

Nose:  Corn was the first thing I smelled, which was joined by caramel, barrel char, floral perfume, and acetone. Yeah, I remembered that acetone from the last time I tried it. When I drew the air into my mouth, a soft vanilla flavor rolled across my tongue.

Palate:  I found the mouthfeel to be silky with a medium weight. The front of my palate picked out corn and vanilla cream. Next up was a blend of brown sugar and rye spice. The back featured oak, nutmeg, and milk chocolate.

Finish:  Medium-long in length, what rounded out this whisky were pepper, dry oak, caramel, and milk chocolate.

Bottle, Bar, or Bust:  The nose was not something I relished. If the acetone wasn’t there, it might have been decent. The palate was okay, as was the finish. The best part of Crown Royal is the mouthfeel. That’s not enough to garner a Bottle rating from me. In this instance, my coronation is a Bar.