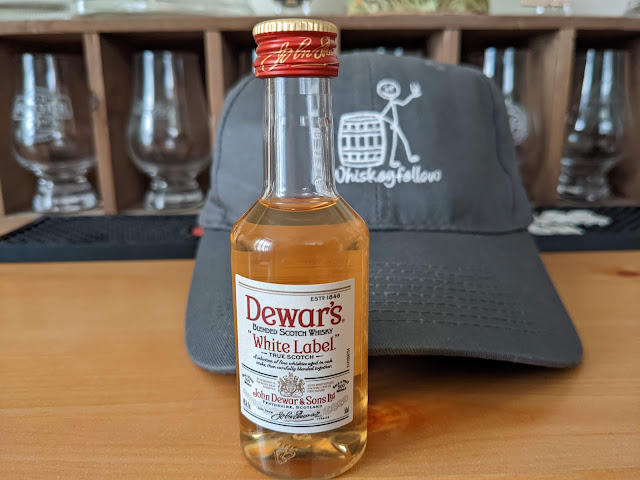 Life is sometimes like a big circle. There’s no real beginning, middle, or end; it is just continuous. Today I’m going way, way back in time.

My whisky journey began as a random choice of spirits. I wasn’t a drinker of alcoholic spirits. My wife suggested that I find something – anything – that I could sip on just to be social. There were two things I knew I didn’t care for:  tequila and gin. I was not too fond of the smell of either, let alone the taste.

In a desire to appear sophisticated, I opted for Scotch. While I wanted to appear as such, my wallet had different ideas. As a friend described things, you have champagne tastes on a beer budget. I don’t quite remember how the actual selection happened, but I think it was Mrs. Whiskeyfellow who handed me a 200ml bottle of Dewar’s White Label (since publishing this, Mrs. Whiskeyfellow says it was not her that got me to try Dewar's).

I cycled between Dewar’s and Chivas Regal for about a year before I opted to delve deeper, and once I did that, I never tried Dewar’s White Label again; until today.

Dewar’s began in 1846 when John Dewar and his two sons, who were wine merchants, purchased whiskies and blended them for their store brand. In 1896, the Aberfeldy Distillery was built so the Dewars could make their own whisky. Dewar’s has changed hands a few times and is currently owned by Bacardi.

Dewar’s White Label is still a blended Scotch, but it blends differently from most brands. Instead of blending grains and malts and then aging the blended whisky, Dewar’s selects over 40 different mature single malts from around Scotland (with a large portion from Aberfeldy) and marries them to form its concoction.

White Label carries no age statement; it is chill-filtered and offers no mention of e150a coloring. You can find this pretty much everywhere from the corner convenience to a full-blown liquor store and should expect to pay about $24.99 for a 750ml package.

This will be an exciting review because I honestly can’t remember how it tasted. I’ll #DrinkCurious and find out what made me stick with it for such a long time.

Appearance: In my Glencairn glass, Dewar’s White Label presented as the color of straw. It formed a thicker rim and watery legs that raced down the wall of the glass.

Nose: Orchard fruits such as peach, apple, and citrus greeted my nostrils. Beneath those were honey, vanilla, and a hint of ethanol. When I pulled the air into my mouth, there was a blast of tangerine.

Palate:  This Scotch had a watery mouthfeel. Vanilla and honey were on the front, caramel was on the middle (although challenging to find), and the back had flavors of lemon curd combined with char.

Finish:  The lemon and char remained through the finish and included vanilla, black pepper, and slightly bitter quality. It was medium in length.

Bottle, Bar, or Bust:  I have to be honest. I was a bit concerned I would hate this. Dewar’s White Label isn’t the best whisky, it won’t blow your doors off, but it isn’t unpleasant. It is basic and unassuming. It was probably a good idea to use this as my toe-dip into Scotch all those years ago because there is enough to make things interesting without some of the overpowering qualities that can turn off novices. It could almost be mistaken for a lower-end Irish whiskey on a different day, which is likely why I initially found this appealing. The price is undoubtedly easy. For those curious about Scotch, this will be a Bottle, and for the more experienced whisky drinker, a Bar. Cheers!

Posted by Whiskeyfellow at 12:00 AM 5 comments: 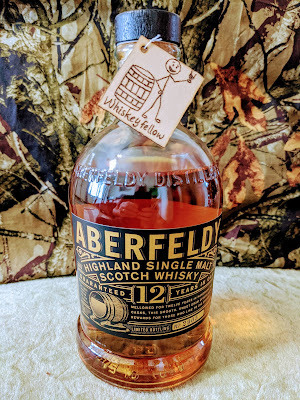 I don't like Scotch!
You hear that more times than you'd ever imagine. Most of the time, someone had something that was way beyond their palate's experience and hasn't been presented with the right Scotch. When I worked retail, I used to love it when folks would tell me they hated Scotch.  I'd ask them what they didn't enjoy, and it was either the smokiness or that it felt like they were chewing on Band-aids. I'd offer them a sample of something that didn't fit that bill, and they'd wind up walking away happy (with a bottle of Scotch in hand). I'd converted them!
My first whisky was Dewar's White Label, which is a blended Scotch made from 40 different malts. It may not have been the best starting point, but it was dirt cheap and I didn't know what the heck I was doing. I can tell you, given the chance to do it all over again, I would have started with something else. I certainly wouldn't pony it up as an introductory whisky to anyone.
I mention Dewar's White Label because its biggest component malt comes from the Aberfeldy Distillery in the central Scottish Highlands.  The distillery is owned by John Dewar & Sons and has been in operation since 1896.  It was shuttered briefly during World Wars I and II, but for the most part, this is a Dewar's workhorse.
Aberfeldy sources its water from the fabled Pitilie Burn, known for its gold deposits. It is also the only distillery that pulls water from this river.

Known as the ‘Golden Dram’, the distillery’s water source is the famous Pitilie Burn, renowned locally for its water quality and famed for its deposits of alluvial gold. Time-honoured techniques, such as longer fermentation, conjure rare honeyed notes – key to the signature sweetness of Aberfeldy’s malts. - John Dewar's & Sons

Today's review is of Alberfeldy's 12-year, the core expression of the distillery. This 100% barley single-malt is aged in ex-Bourbon and ex-sherry casks. The distillery claims they lose more than a third of each cask to the angels. Bottled at 40% ABV (or 80°), you can expect to pay about $40.00 for a 750ml, making this a low-barrier of entry single malt Scotch.
One thing that stood out was a claim on the label that this is Limited Bottling No. 2905. After doing some research, this is akin to finding a bottle of Old Grand-Dad 114 and seeing Lot 1 on it. You may think you've snagged something special, but it appears every label is printed with the same number.

So, now that we've explored the background, how about exploring the whisky itself? It is time to #DrinkCurious.
Appearance:  In my Glencairn glass, this single malt presented as a darker gold in color. There is nothing on the bottle that suggests this is naturally-colored, and there's no reason to think it doesn't have the caramel coloring Scotch may legally possess.  It created a thin rim that generated fast legs to race back to the pool of liquid sunshine.
Nose:  I could smell the honey across the room. When I brought the glass closer to my face, citrus and raisin were easy to pick out. The milk chocolate, on the other hand, took more effort. When I breathed in the vapor through my lips, orange and vanilla coated my mouth.
Palate:  Considering the 40% ABV, the mouthfeel was full-bodied and creamy and was a nice surprise. The whisky itself was simple to drink. On the front, I tasted vanilla and milk chocolate. The middle consisted of citrus, peach, and cocoa powder. Almond and oak rounded out the back.
Finish:  My first sip suggested a medium-short finish, however, subsequent ones morphed it to medium-long. Similar to the palate, the finish was simple and offered honey, milk chocolate, and light pepper.
Bottle, Bar, or Bust:  Dewar's White Label this is not. What this is is a nice way to introduce folks to Scotch, especially if they say they don't like Scotch. There's nothing complicated about it, there's no astringent (Band-aid) quality, there's no peat smokiness. If you're seeking a very easy sipper, one that would work well on a hot, humid, summer afternoon, Aberfeldy 12 will fit that bill. If you only prefer complex or smoky whiskies, this one's not for you. The price is certainly fair. Taking all of that into account, I'm conveying a Bottle rating for Aberfeldy 12. Cheers!
My Simple, Easy to Understand Rating System