Bourbon is America’s native spirit. September is Bourbon Heritage Month. Attending the Kentucky Bourbon Festival is high up on my bucket list. Every year, I say next year will be the year I make it happen. I’ve been saying that for several years now. One day, it will happen.

A few years ago, realizing that my trip was still out of reach, I wanted to do something to help celebrate Bourbon Heritage Month. I came up with a 30 Days of Bourbon challenge...

You can read the remainder of this article over at Bourbon & Banter. Cheers!

Posted by Whiskeyfellow at 8:54 AM No comments: 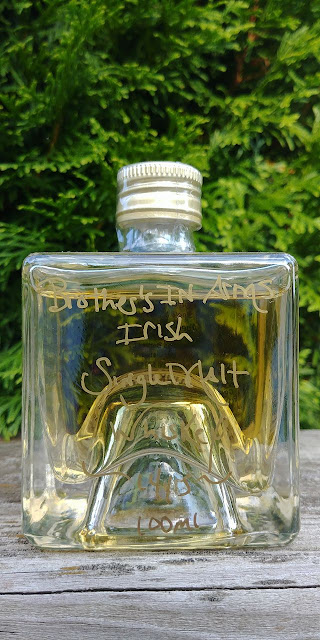 I'm sipping on an Irish whiskey tonight. This beauty is from the Teeling brothers, Jack and Stephen. Yes, those Teeling brothers. It is called Brothers in Arms, a marriage of two single malts. It carries a 14-year age statement because that's the younger of the two, the older being 21 years. Brothers in Arms is sold exclusively by Vom Fass.
The appearance is bright gold. Swirling it around in the glass provides a thick rim of whiskey that sticks to the sides and develops thick legs.
The nose begins fruity, very much a crisp apple, which is followed by an abundance of malted barley. Inhaling through my lips brings honey and a tad of citrus.
The mouthfeel is a bit thin, but it also is only 84°, as such it is not unexpected. On the palate, flavors of toffee, nuts, chocolate, and honey shine through.
Finally, there's the finish. It is a little shocking to have the level of spice it has. It isn't what I'd classify as overwhelming but nonetheless is strong. It hangs at the top of my throat.
Overall, this is a very smooth drinker and is quite enjoyable. I'm happy to have it in my library. Cheers!
Posted by Whiskeyfellow at 12:00 AM 2 comments: 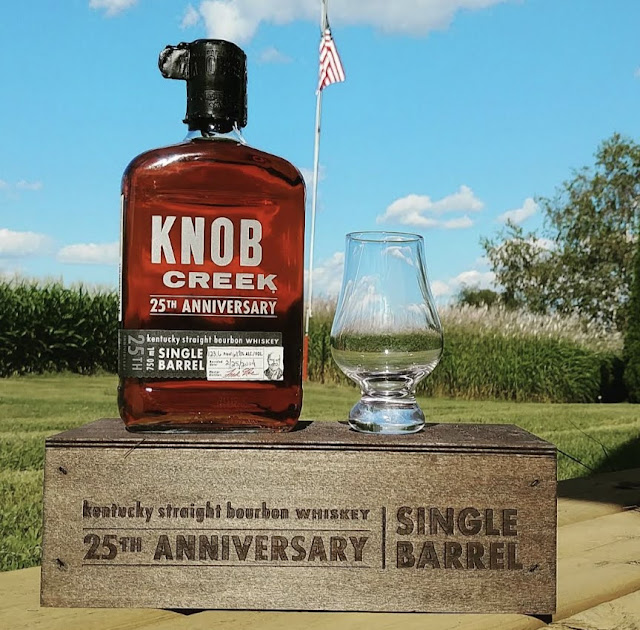 Today was my father-in-law’s celebration of life. It was an amazing day to honor a great man. From the 21-gun salute the American Legion presented to the outpouring of love, it was just humbling.
I wanted to pour something special, and this Knob Creek 25th Anniversary bottle has been waiting for an excuse to be opened.
The KC 25th is selected especially by Fred Noe, Jim Beam's Master Distiller. A few versions are floating around on store shelves; this particular one is bottled at 123.6° and was barreled on February 25, 2004, where it rested until 2017. It is unfiltered, and cask strength, with a caveat that it was "quality screened to remove any pieces of charred barrel wood from the liquid."
Appearance: In my glass, the appearance is an inviting, thick-looking, deep amber. Swirling it around in the Glencairn glass leaves a significant rim of whiskey that produces a limited number of legs that take their time dropping. In fact, they just kind of park there and never quite fall to the pool.
Nose: The nose is fruity, followed by caramelized sugar. Breathing the aroma through my lips brings almost a dry vanilla quality.
Palate: The first pass over my tongue proves the appearance. This has a very thick feel to it. Heavy vanilla and sweet fruit roll on the palate, leading to oak and a dash of pepper spice.
Finish: That pepper spice then begins to build on the finish. Like many KC 120s, this is very soft for a Bourbon of this proof. But, the finish also makes itself known and isn't lost in that softness.
Bottle, Bar, or Bust: Overall, this is an excellent Bourbon. However, so are many KC 120 store picks that can be had for a third of the cost. That isn't to say I'm disappointed, but it is hard to justify the $130 price tag on this one when you realize the aforementioned store picks.
If you're a massive fan of Knob Creek, this is undoubtedly a great addition to your collection. But I might spend that same money elsewhere for the average Bourbon fan. As such, it earns a Bar rating. Cheers!
Posted by Whiskeyfellow at 10:06 AM No comments: