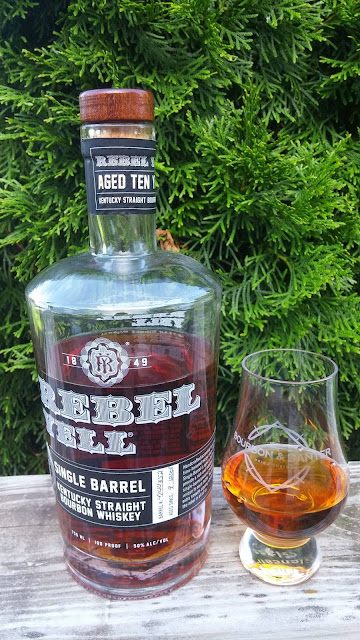 I’ve had this bottle of Rebel Yell 10 Single Barrel since February. I’ve delved into it several times, but I’ve not yet put together a review. That’s all about to change.
The Rebel Yell label is owned by Luxco, the same folks that bring us Ezra Brooks, David Nicholson, Blood Oath and Yellowstone. Rebel Yell is sourced and it is believed by several folks this Bourbon comes from Heaven Hill. My bottle is from Barrel # 4744352 and was distilled September 2005. From the name, it carries a 10-year age statement.
Rebel Yell is a wheat Bourbon, or wheater. If you’re unfamiliar with the term, wheater means instead of using rye as the second largest ingredient in the mash bill, the distiller uses wheat. Wheaters are typically softer and sweeter than traditional and high-rye Bourbons, as the wheat allows the corn sweetness to shine through. Some other well-known wheaters are Maker’s Mark, W.L. Weller, Old Fitzgerald, and, of course, Pappy Van Winkle.
How does Rebel Yell 10 stack up?
The appearance is a pleasing orangish-amber. It doesn’t look “young” in the glass. Swirling it around leaves a very thin rim in my Glencairn that produces slow, almost non-moving legs.
Running it under my nose brings aromas of vanilla, caramel, and an orange candy. There’s a light oak that tries to work its way through. Inhaling through my open mouth brings out the oak and that orange candy really punches through.
The mouthfeel is extremely light, it almost is airy on my tongue. On first taste, the first thing to hit me is caramel, followed then by orange, and that by oak. That oak then starts to build and hangs out mid-palate. The second sip brings less caramel and more orange and then leather. To say this doesn’t have a complex palate would be extremely unfair.
At 100°, you’d expect some burn. If that’s what you crave, you’ll be disappointed. The finish is much lighter than I was prepared for, but it is long as it hangs out mid-palate. I feel nothing on the back palate and there’s no warming in my throat.
Rebel Yell 10 is priced at $49.99. As this is where many craft labels like to price themselves (I’m not considering Rebel Yell a craft whiskey by any means), that’s a crowded spot on the liquor store shelf. Should you buy it? Overall, I’m quite pleased with Rebel Yell 10 and would have no qualms pulling the trigger. It earned my Bottle rating.
Enjoy the rest of your evening. Cheers!
Posted by Whiskeyfellow at 9:45 AM No comments:

Making the Case to #DrinkCurious

Do you like a whiskey because you’re expected to like it? Do you hate another because you’ve not heard anything good about it? Are you a fanboy of a certain distiller (or producer), and absolutely anything that comes from them gets a free pass? Have you had a bad glass of whatever, and you’ve judged the entire product line based on your bad experience?

I keep thinking back to Old Weller Antique. My wife was kind enough to buy me a bottle several years ago. She was in the business and told it was very decent. I tried it. I hated it. I mean, I really, really hated it, to the point where I poured the remainder down the drain several months later because we were moving and, well, I didn’t want to go cross country with something I couldn’t stand...

You can read this article in its entirety over at Bourbon & Banter. Cheers!

Posted by Whiskeyfellow at 9:24 AM No comments: