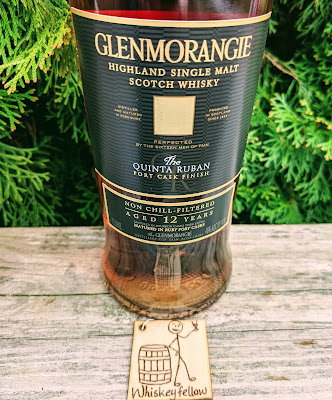 It isn't too often when Fortune is kind as it pertains to whisky. Last year, Glenmorangie changed one of its staple Scotches, The Quinta Ruban. You see, the good Dr. Bill Lumsen, Glenmorangie's master blender, who has a long track record of doing things right, opted to add another two years to what was a 12-year whisky. So, why is Fortune kind to us? Because the discontinued 12-year expression is still out there and, while supplies are dwindling, it isn't overly difficult to find.
If you're not familiar with Glenmorangie (a/k/a Glenmo), it is a Highland distillery that was founded in 1843 and located in Tain, Ross-shire. Mothballed twice, first from 1931 to 1936 and then again from 1941 to 1944, Glenmo has the tallest stills in all of Scotland, which are nicknamed giraffes. Hard water, high in mineral content, sourced from the local Tarlogie Springs, is used in the distillation process. The giraffe concept is so important to Glenmo that it pioneered a partnership with the Giraffe Conservation Foundation, with the goal of saving these animals from becoming further endangered.
The Quinta Ruban 12-year used Glenmo's base single-malt distillate and aged it a decade in former Bourbon barrels. Those barrels came from Jack Daniel's, where they rested four years before being dumped and subsequently shipped to Scotland. Then, Glenmo placed the whisky in ruby Port pipes, where it matured another two years. These pipes, which are tapered barrels, came from the Quintas of Portugal. Quintas is Portuguese for wine estates. Ruban is the Gaelic term for ruby. Hence the name.
Bottled at 46% ABV (92°) and non-chill filtered, when you stumble upon it, you can expect to pay about $46.00 for a 750ml.
What can you expect from this Scotch?  The only way to tell for sure is to #DrinkCurious.
Appearance:  Poured neat in my Glencairn glass, this Scotch presented as deep mahogany in color. It formed a medium rim that created thick, watery legs that fell back down the wall.
Nose:  Fragrant and a bit challenging to nail down, aromas of honey, raisin, vanilla, cinnamon, and dried fig wafted from the glass. When I drew the vapor into my mouth, the dried fig slammed across my tongue.
Palate:  Creamy and full-bodied, The Quinta Ruban offered smoked oak, clove, and roasted nuts on the front of the palate. As it moved to the middle, it became a fruity assortment of fig, date, raisin, and blueberry. Then, on the back, I tasted dark chocolate, caramel, and marshmallow that could have made for a tasty candy bar.
Finish:  Medium-to-long and mostly dry, the finish left flavors of charred oak, caramel, chocolate, raisin, and honey.
Bottle, Bar, or Bust:  Do yourself a favor. When you see The Quinta Ruban 12-year on the shelf, perhaps in that clearance section of your local liquor store, grab it. Take two if you can. This is an excellent Scotch that features a beautiful nose, plus a delicious palate and finish at an attractive price. Yes, that's a Bottle rating from me. Cheers!
My Simple, Easy to Understand Rating System
Whiskeyfellow encourages you to enjoy your whiskey as you see fit but begs that you do so responsibly.
Posted by Whiskeyfellow at 6:00 AM No comments: