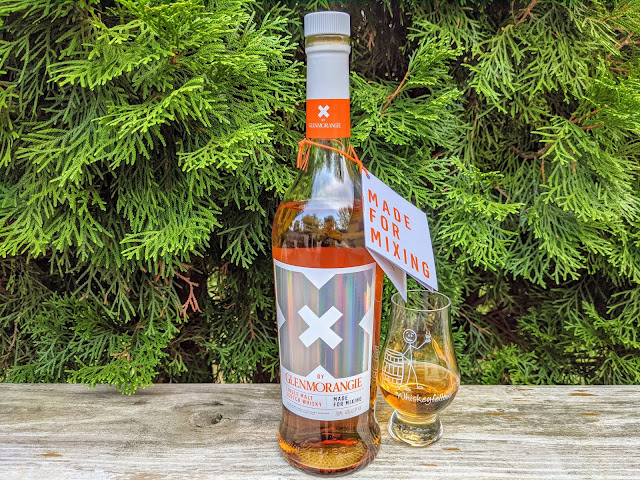 I've had Scotch made for mixing before, and frankly, I enjoyed it neat.  A little over two years ago, I reviewed Auchentoshan "The Bartender's Malt" and it earned a Bottle rating. In fact, I said, "I'd buy this bottle all day long."  It was $49.99 and I didn't even bother using it as a mixer.

Today I'm pouring X by Glenmorangie, which is a Highland Single Malt made for mixing. Glenmorangie wants this description to be unmissed. It is on the bottle. It is on the hangtag. There is even a QR code on the reverse label so you can get mixing recipes. Full disclosure time:  I'm a big fan of Glenmorangie and I can't recall anything that was just meh out of this distillery. Dr. Bill Lumsden knows his stuff and he doesn't release whisky for the sake of releasing whisky. There is a ton of thought and consideration put into each bottling and if it doesn't meet his standards, it doesn't make it to market.

As I stated, this is a single malt, which means that the whisky came from a single distillery and hasn't been blended with other whiskies. It aged in the normal ex-Bourbon barrels as the original Glenmorangie. However, another portion was aged in virgin, charred oak casks. It is bottled at a basic 40% ABV (80°) and a 750ml bottle will set you back about $25.00 or so. It carries no age statement. Wait! Don't roll your eyes. Read on, I beg you.

"Crafted with top bartenders, this is our single malt made for mixing. Pair its sweeter and richer taste with your favourite mixer to create delicious drinks." - Glenmorangie

Interestingly enough, that's pretty much the same story from Auchentoshan.

I'd like to thank Glenmorangie for providing me a sample of X in exchange for a no-strings-attached, honest review. But, before I do that, I want to talk about the presentation. Most distilleries send a bottle between 50ml and 750ml and maybe some printed material. A select few pour a lot of effort into what's sent out. Glenmorangie went above and beyond. 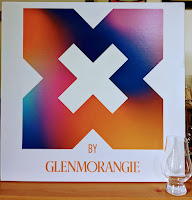 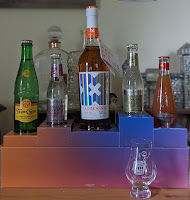 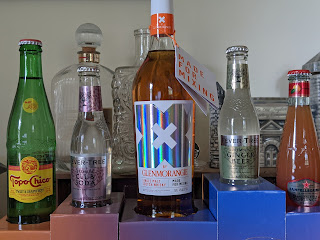 The box was huge. My Glencairn glass is there for perspective. When I pulled off the outer box, inside were five bottles:  X by Glenmorangie, Topo Chico Twist of Grapefruit, Fever-Tree Club Soda, Fever-Tree Ginger Beer, and Sanpellegrino Aranciata Rossa. It also contained suggested cocktail recipes. One of which I'm going to make (after I taste the X neat) is called X Ginger:

Fill a glass with cubed ice. Add X by Glenmorangie then top with ginger ale. Gently stir and garnish with an orange wedge.

Now, it is time to #DrinkCurious.

Appearance:  Poured neat in my Glencairn glass (because X is made for mixing and I judge all whiskeys, at the very least, neat), this Scotch presented as deep gold in color. I observed a fat rim that formed a thick, wavy curtain that slowly crashed back to the pool.

Nose:  The aromas of orange citrus and honeysuckle were unmistakable. It bordered on almost overwhelming. But, beneath those were pear, butterscotch, and something floral. When I pulled the vapor into my mouth, I could swear I was eating a macaroon.

Palate:  The mouthfeel was thick and viscous. In fact, the more I sipped, the huskier it became.  The front featured raw honey, malt, and almond. Flavors of orange peel and crème brulée were next, and on the back, it was simply char and toasted oak.

Finish:  My hard palate tingled despite the minimal proof. Virgin oak was evident and was joined by char, almond, and maple syrup. Like the mouthfeel, the finish was initially short, and subsequent sips elongated it to what I would describe as medium in length.

Bottle, Bar, or Bust:  Is Glenmorangie X made for mixing? Well, sure, because Glenmorangie says so. Is it made for drinking neat? You betcha. This was a sweet but simple Scotch that provided a pleasant experience. When you compare Glenmorangie X to many other $25.00 Scotches, this not only deserves a Bottle rating but also provides an opportunity to #RespectTheBottomShelf!

Afterword:  For whatever it is worth, I made the X Ginger cocktail sans the orange simply because I didn't have one on hand. It did tame the ginger beer and give it a sweetness that complimented the expected spiciness.