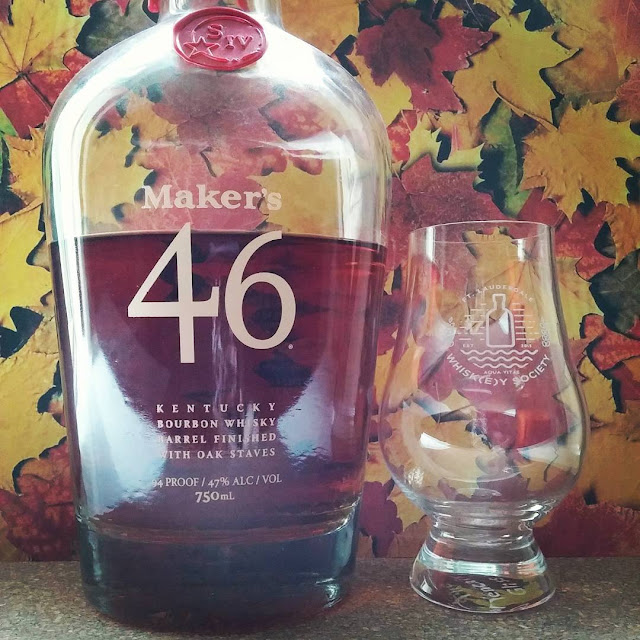 Tonight's pour is Maker's 46. If you're unfamiliar with it, the best explanation is it is the Maker's Mark you know and love that has been finished using French oak staves. It is also only finished during the Winter season.

I've reviewed Maker's 46 a few times. One of the reasons I love it is because of all the big flavor.

The appearance is a beautiful rich amber, and swirling it in my Glencairn forces the whiskey to cling to the sides. Interestingly enough, they don't really drop. They just hang there.

The nose is an amazing sweet fruit followed by vanilla. The fruit really presents itself and is domineering.

When I bring the glass to my lips and inhale, the fruitiness disappears and instead I pick up thick chocolate. That's totally unexpected!

The first taste is the sweet wheat you expect from Maker's Mark, and from there flavor changes to cherry. There's a little bit of chocolate for good measure, and then that French oak brings the spiciness that continues to build to an amazing finish. The combination can best be described as delightful.

At only 94° there is more tingle from the finish than you might have assumed.

For the $34 spent, Maker's 46 is something I'm proud to have and will definitely be a permanent part of my whiskey library.

Posted by Whiskeyfellow at 2:58 PM No comments: