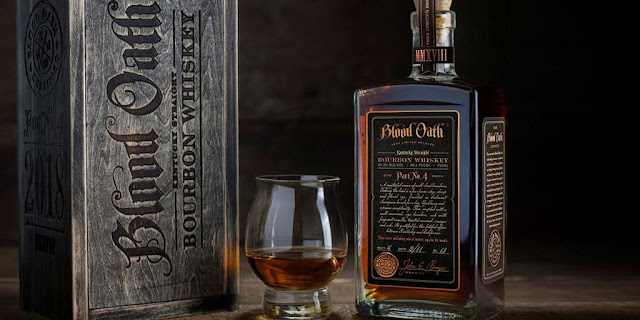 I’ve come into this review completely blind. I’ve not had any of the previous Pacts, so I had no preconceived notions. The appearance in the glass is a deep, rich amber. Swirling it around creates a very thin rim, leading to medium legs that drop quickly into the pool...

You can read the review in its entirety at Bourbon & Banter. Cheers!

Posted by Whiskeyfellow at 9:46 AM No comments:

I’m always excited whenever a new bonded whiskey comes to market. I heard about Old Overholt Bonded Rye hitting the market and, at least this time, Wisconsin was not high on the early distribution schedule. However, yesterday one of my great local liquor store owners let me know that he just got it in. As you can guess, it didn’t take me more than a few hours to grab a bottle of this Rye.
The Bottled in Bond Act of 1897 has very strict guidelines, including straight talk regarding what the label requires. The A. Overholt & Co., a Beam-Suntory subsidiary is listed as both the distiller in Clermont and the bottler in Frankfort. Following the very strict laws of the Bottled in Bond Act of 1897, the label shows it is distilled in Clermont and bottled in Frankfort. It is also is bottled at 100° and aged four years, the minimum age required by the Act.
Old Overholt’s mash bill is right around 51% rye, the remainder being corn and barley. That puts it in the same realm as Buffalo Trace’s Rittenhouse Rye. I’ve always enjoyed Rittenhouse, it was the Rye that got me interested in Rye.
So, how does Old Overholt Bonded stack up?
In the glass, the appearance was an orangish amber, reminiscent of the color of iodine. Swirling it around created a thin-to-medium rim that yielded thin, slow legs.
At chin level, a combination of floral rye and sawdust wafted to the nostrils. At lip level, brown sugar was evident, along with a bit of cereal. Lifting it right under my nose made the brown sugar stronger. Inhaling through my lips added vanilla.
The initial mouthfeel was very light and airy. A second sip confirmed it. Flavors of cinnamon and white pepper were up front, patience brought mint and dry oak.
The finish was long and continued to build spice on the front of the palate. It was slightly warming to the throat and a few sips made the hard palate a bit buzzy.
In the future, I’ll do a side-by-side blind tasting with Rittenhouse Rye. As for now, in my opinion, Old Overholt Bonded beat it.
Bottle, Bar or Bust: I’ve heard retail on this was in the mid-twenties. I paid $32.00. That’s more than I wanted to pay, but it is still enjoyable. For the suggested retail, I’d make this a definite Buy. For what I paid, it starts to enter the realm of Bar. If I found it for a lower price I’d absolutely buy another Bottle. Cheers!
Posted by Whiskeyfellow at 2:16 PM No comments:

Remember When Nobody was Going to Drink Elijah Craig Again? 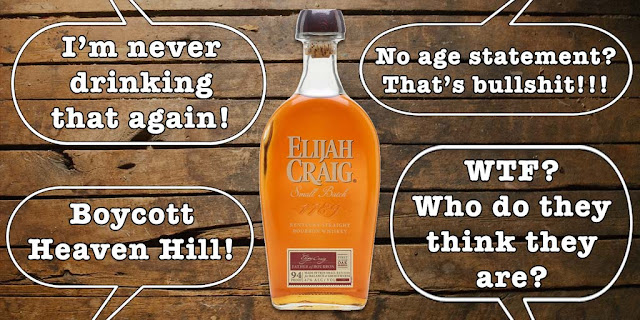 Do you ever feel worn out? Run down? Past your prime? Have you ever longed for your younger days? Does getting older suck, or is it a great experience?

Taking a quick trip back in time, specifically January 2016, the big news in Bourbon was that Heaven Hill dropped the age statement on Elijah Craig Small Batch. The announcement stated they changing it from a 12-year to a No Age Statement (NAS) blend of barrels that aged anywhere from eight to a dozen years.

The reaction on social media and in whiskey groups was immediate and, to say the least, vitriolic. To be fair, a portion of it was anger over the feeling of being misled. Folks were told since 2014 that the age statement would not be dropped, and then, the rumor turned into reality. The mudslinging was lobbed at everyone, but Bernie Lubbers was the biggest target by far...

You can read the rest of this article over at Bourbon & Banter. Cheers!

Posted by Whiskeyfellow at 10:43 AM No comments: