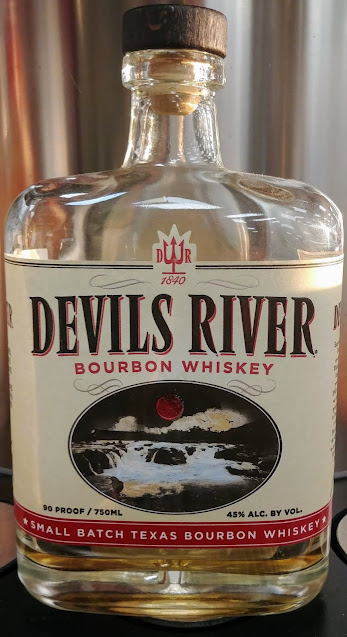 Devils River Bourbon Whiskey is advertising like crazy on social media. Most recently, they announced it is now available in Wisconsin and suggest that you should run out and get a bottle now. I've tried it, and before you get the #FOMO bug about this, you should read my tasting notes.
Sin Responsibly. That's their tagline. More on that later. The backstory is that Devils River is named for a waterway discovered by a Texas Ranger named John Coffee Hays. This is meaningful to the distillery because the Devils River is the source of the limestone water used to proof down this whiskey.
Devils River is distilled from a mash of 75% corn, 21% rye and 4% malted barley. It carries no age statement, and the actual distiller is Jus-Made/Southwest Bottling. Retail is right around $20.00, making this super-affordable and relatively low-risk, right?  The only way to find out is to #DrinkCurious.
Devils River appeared as a bright gold color that left a very thick rim on my Glencairn glass. That rim generated fat, wavy legs that slowly worked its way back to the pool of liquid sunshine.
There were dominant aromas of corn and vanilla. Once you got past that, it was easy to pick up charcoal. When I inhaled through my open lips, a flavor of candied corn rolled over my tongue.
The mouthfeel was thin and watery, and up front was pure ethanol. When you consider the bottle I poured my sample from had been open quite a while, that punch to the palate should have oxidized off long ago. Once I got past the ethanol shock, I was able to pick up corn. Mid-palate was all charred oak. While I was expecting something on the back, nothing ever materialized.
I enjoy the flavor of barrel char, but not when it is so dominant. The finish was like chewing a charred stave. It was, thankfully, a short one.
Bottle, Bar or Bust:  William Faulker said, "There is no such thing as bad whiskey. Some whiskeys just happen to be better than others." Yeah, okay, whatever. For me to say that Devils River Bourbon is bad whiskey is an insult to bad whiskey. You will not sin responsibly if you spend $20.00 on it, because this one's a definite Bust.
Cheers!


Posted by Whiskeyfellow at 3:10 PM No comments: 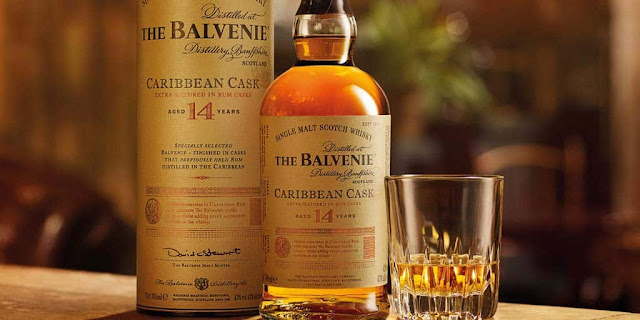 It seemed that much of my 2018 involved barrel-finished whiskeys. Scotch, Bourbon, Rye, or Irish - all of it jumped out at me. Barrel finishing is an interesting process where the distiller or producer takes an (allegedly) good whiskey and, once properly matured, dumps it to another barrel that previously held something else. That something else may have been another spirit, wine, maple syrup, coffee, or, as we saw with George Dickel, Tobasco sauce.

One of the more memorable finished whiskeys I tasted last year was The Balvenie Caribbean Cask Single Malt Scotch...

You can review this Scotch review in its entirety over at Bourbon & Banter. Cheers!

Posted by Whiskeyfellow at 10:39 AM No comments: 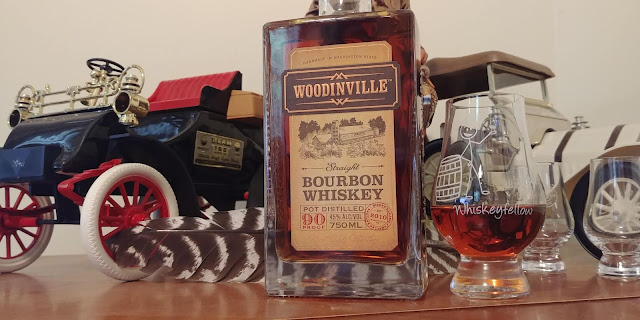 One of my favorite things about sipping whiskey is discovering something new and unheard of. Oh, it doesn't mean it will always be good, but it is exciting nonetheless. Some folks really enjoy drinking the same thing time after time, and I don't blame them, that's their thing. For me, the whole #DrinkCurious lifestyle is all about exploration into the unknown.


Woodinville Straight Bourbon is distilled in-house at the Woodinville Whiskey Distilling Co. in Woodinville, Washington (that's a lot of Woodinvilles!). The whiskey is then transferred to rickhouses on the other side of the Cascade Mountains in Central Washington where they are left to age. The barrels are created from wood seasoned in the open air for 18 months. The barrels are then slow toasted and are subject to a heavy charring.


The Bourbon itself is distilled from a mash of 72% corn, 22% rye, and 6% malted barley. It is bottled at 90°, and while it doesn't carry an age statement, Woodinville suggests it is aged over five years.  Suggested retail is $55 for a 750ml.


Before I get started on the tasting notes, I'd like to thank Woodinville Distilling Co. for providing me with a sample in exchange for a no-holds-barred, honest review.


In my Glencairn glass, the appearance is a dark caramel. It left a thin rim that led to fat legs. Those legs slowly dropped back to the pool of liquid sunshine.


Aromas of cinnamon and vanilla initially permeated my nostrils. Underneath those were toasted wood and berries. When I inhaled through my lips, I picked up crème brūlée.


The mouthfeel was thick, oily and coating. The front of my palate picked up cherry and caramel. There was also quite a bit of heavy oak.  Mid-palate, it was very dark chocolate. That all yielded to black pepper and a return of the oak.


All of that resulted in a long, steady, peppery finish that brought back memories of the long-gone Elijah Craig 12.


Bottle, Bar or Bust:  There are a few factors going on here in my rating. I enjoyed the mix of cherries and dark chocolate on the palate and the finish that brought back good memories. When that's compounded with the suggested retail, which falls nicely into the rest of the craft whiskey category, there's really no downside and easily snatches up a Bottle rating. If you visit their website at woodinvillewhiskey.com, you can discover if distribution is near you. 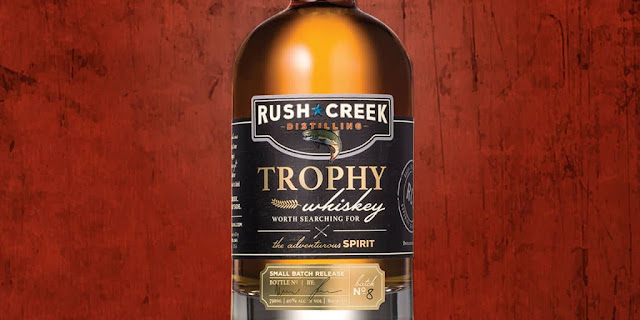 I had the opportunity in February to meet up with the folks at Rush Creek Distilling at Distill America in Madison. I was intrigued by what they had to offer and was interested in learning more. We talked and they were kind enough to provide me with a sample of their Trophy Whiskey for an unbiased, no-strings-attached review...

Posted by Whiskeyfellow at 9:49 AM No comments: 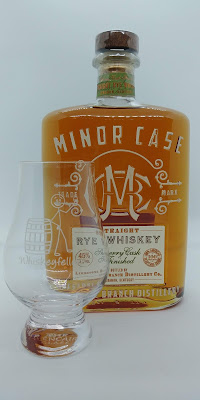 What's a Minor Case?  No, that's not the opposite of a Major Case!  Minor Case Beam was an actual person, part of the Beam family. His motto was Craft only the finest whiskey. Unfortunately, Minor Case Beam was put out of business thanks to that horrible American experiment called Prohibition. From everything I can gather, Minor Case's son Guy S. Beam distilled, then it skipped a generation until Paul and Steve Beam came around over at Limestone Branch.
Minor Case Straight Rye Whiskey is produced by Limestone Branch. This one is actually distilled by the folks at MGP. It utilizes a mash of 51% rye, 45% corn, and 4% barley. It is aged two years, then allowed to finish in ex-Sherry casks from Meier's Winery. Minor Case is non-chill filtered and bottled at 90°. Suggested retail is $50, which is about average for "craft" whiskey brands.
The bottle is drop-dead gorgeous. The lettering is debossed, then painted white so it really jumps out at you. It has a very rich, premium look and feel. Packaging can be pretty or ugly, but all that matters to me is the whiskey inside. I'd like to thank Luxco for providing me a sample of Minor Case Straight Rye in exchange for a no-holds-barred, honest review. As such, it is time to #DrinkCurious.
In my Glencairn glass, the appearance was a light amber, and, in fact, looked young. It left a thin rim on my glass, which led to a heavy, wavy curtain that dropped back to the pool of liquid sunshine.
Aromas of cinnamon spice and floral rye filled my nostrils. Underneath those were bright, fruity notes, most likely from the sherry, along with an interesting touch of butterscotch. When I inhaled through my mouth, I picked up additional floral notes.
The mouthfeel was thin, light, and airy.  Immediately up front, I tasted a combination of raisins and brown sugar. At mid-palate, the sherry became evident, along with dark chocolate, most likely from the malted barley, but I was shocked how strong it was considering the very low barley content. On the back, it was a marriage of citrus and rye spiciness.
The finish was soft, and chocolatey, with cherries and dry oak. It was delicate but long-lasting, and something that almost begged for another sip.
Bottle, Bar, or Bust:  Thankfully, the youngish appearance was the worst thing about Minor Case Rye. There was a lot going on with this whiskey, it is interestingly complex and offers some surprises. I would have assumed heavier fruitiness due to the sherry finish but was pleasantly impressed by the heavier chocolate notes, especially in the finish.
While the price for this two-year may shy you away, it is on par with other "craft" whiskeys you'll find on the shelf. Minor Case isn't another Me Too whiskey that could get lost in a sea of other similarly priced whiskeys. When you consider what Minor Case has to offer, I believe you'll agree this one earns a Bottle rating. Cheers!
Posted by Whiskeyfellow at 6:03 PM No comments: