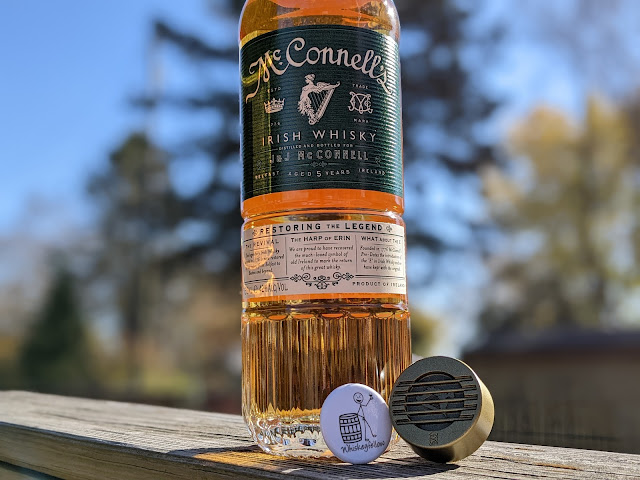 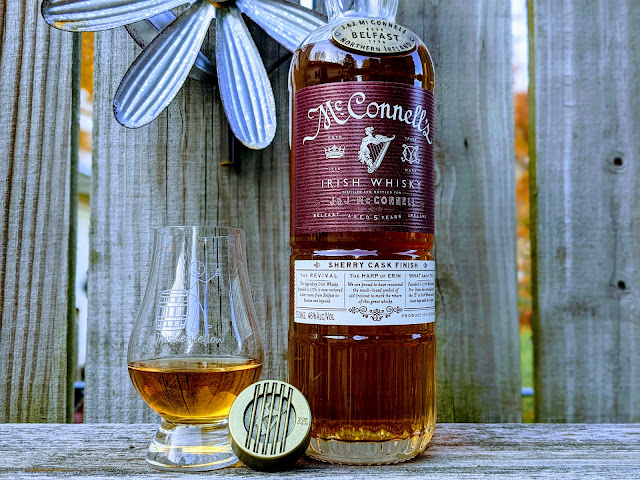 A distillery was built along the banks of the River Lagan. The distillery churned out distillate uninterrupted until April 20, 1909, when a fire destroyed half the distillery along with 500,000 gallons of whisky. The restoration took place, but then, in 1920, Prohibition came to the United States. Losing one of its biggest markets, 90% of Irish distilleries shuttered, including McConnell’s.

Many might look at my spelling of whisky and wonder what happened to the e. After all, American and Irish brands typically use it. McConnell’s purposefully chose to differentiate itself by not including it. No law requires either spelling; it is viewed as a preference.

Today I’m exploring McConnell’s Sherry Cask Finish, a blended Irish whisky made from malt and grains. It was aged five years in former Bourbon barrels, then transferred to former Oloroso sherry casks for another nine months. It is packaged at 46% ABV (92°) in an attractive bottle that retails for about $42.99.

Before I get to the tasting notes, I am thankful to Conecuh Brands for providing me with a sample in exchange for a no-strings-attached, honest review. And now, it is time to #DrinkCurious to figure this one out.

Appearance: A neat pour in my Glencairn glass revealed a sunflower-gold liquid. It formed a thinner rim that yielded wide, fat legs.

Nose: As soon as I popped the cork, a fragrant aroma of plum, raisin, leather, and pastry flowed from the neck and into the glass. Heavy raisin dragged across my tongue when I pulled the vapor through my lips.

Palate: I was taken aback by how weighty the mouthfeel was. It had a syrupy consistency. On the front, I tasted dates, raisins, and apples. As it moved to the middle, I found dark chocolate, hazelnut, and shredded tobacco. Then, I encountered dry leather, clove, and oak tannins on the back.

Finish:  The short-to-medium finish was made of leather, chocolate, date, oak, and clove.

Bottle, Bar, or Bust:  I was impressed with how complex this whiskey (sorry, whisky) was. While the finish wasn’t very long, it did encourage me to take additional sips (and, eventually, refill my glass). McConnell’s Sherry Cask Finish is a sherry bomb, so if that’s your jam, you’ll want to jump all over this Irish whisky. I’m thrilled to have it in my whisky library and proudly declare it has earned my Bottle rating. Cheers!