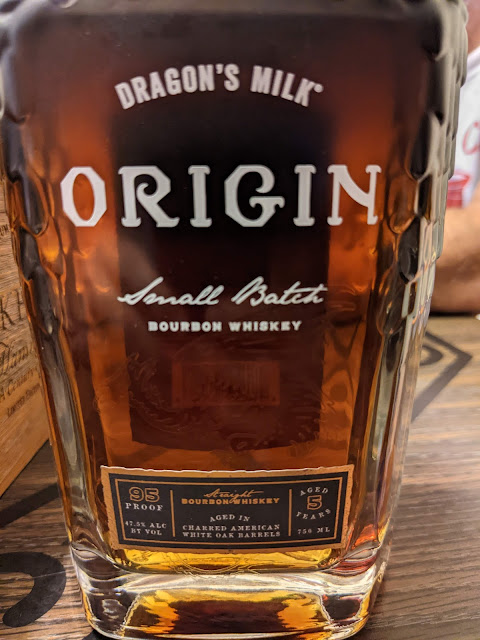 New Holland Spirits is probably best known for its Dragon’s Milk beer. However, New Holland broke into the distilling market in the last decade and a half. Founded by Brett VanderKamp in Holland, Michigan, in 1997, New Holland has made a name for itself and employs a team of more than 500, making it a serious operation.

New Holland capitalized on the name of its famous beer and pulled that over to a line of whiskeys. However, that doesn’t translate to the same mash used.

“Origin is one of the most exciting projects we’ve taken on at New Holland. We’ve been sampling this product patiently for five long years and are continually impressed by its complexity of flavor, and delicate finish. As Michigan’s oldest whiskey distiller, we are immensely proud to be able to offer this bourbon to our customers. We feel that it is a landmark moment for us as a distillery.” – Adam Dickerson, Brand Manager

Origin is a small batch Bourbon consisting of 100 barrels or less that were distilled from a mash of corn, rye, and a large portion of malted barley. It aged for at least five years in new, #3 charred American white oak before being packaged at 95°. It is available in California, Colorado, Illinois, Indiana, Michigan, Texas, and Wisconsin.

A couple that Mrs. Whiskeyfellow and I are friends with purchased their bottle for $46.00 and cracked it open with me while we did the #DrinkCurious thing.

Appearance: Served neat in my Glencairn glass, Origin presented as caramel in color. It formed a medium rim that released a thick curtain that crashed back into the pool.

Nose: I smelled crème brulee, field corn, tobacco leaf, and charred oak. When I pulled the air into my mouth, the crème brulee became thick.

Palate:  Origin had a thin consistency. The front of my palate tasted candy corn, pink grapefruit, and vanilla. Flavors of cherry, orange peel, and caramel were found midway through, while the back encountered tobacco leaf, charred oak, and clove.

Bottle, Bar, or Bust: The bottle was gorgeous. It was embossed with scales and had a small dragon etched on it. It would make a lovely decanter once you finished what was inside. The contents, however, were less exciting. I found Origin to be expensive for what it is; while $46.00 isn’t a lot for whiskey these days, I would have expected more from it. That seemed to be the consensus of the three of us trying it. I’ll toss Dragon’s Milk Origin a Bar rating; you’ll want to sample this before committing to a bottle. Cheers!