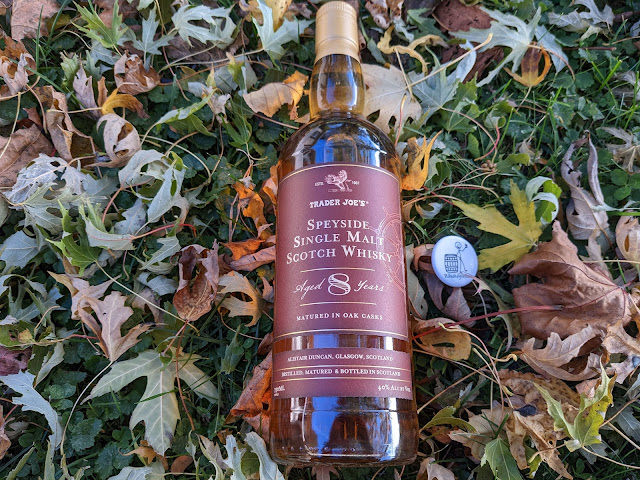 If you delve beyond your neighborhood liquor and grocery stores, you have the opportunity to run into off-the-radar whiskies. They’re private label stuff, but well-known brands make them. Often, they come at a discounted price. However, these whiskies become a crapshoot because you don’t know if you’re finding a hidden gem or something that is gross.

I’ve had a mixed bag of luck regarding Trader Joe’s private-label Bourbons and Scotches. Islay Storm is one of my favorites and one that I keep on hand. The worst (by far) was Kentucky Bourbon Straight Whiskey.

Mrs. Whiskeyfellow likes to shop at Trader Joe’s. And, because she’s incredible, she takes photos of things I might find interesting in the event I want her to purchase them. She showed me Speyside Single Malt Scotch Whiskey at a $20.00 price. It was eight years old. I told her to go for it – after all, if it turned out to be a Bust, it isn’t as if we were out a lot of money.

As expected, this Scotch is packaged at 40% ABV (80°). I would have been shocked if it was any higher. It is produced and bottled by Alistair Duncan Ltd., which tells us nothing because even a Google search came up with barely any information beyond it being a dormant company founded 28 years ago. And, since there are more Speyside distilleries than the other regions combined, your guess is as good as anyone who distilled it.

Let’s #DrinkCurious and learn if I’ve discovered an opportunity to #RespectTheBottomShelf or if I bought a loser.

Appearance: Served neat in my Glencairn glass, this Speyside Scotch presented as dull gold. A thick rim released watery legs that crashed back into the pool.

Nose: A big blast of butterscotch hit my nostrils, followed by apple, pear, and apricot. The apricot carried through as I drew the air in past my lips. So far, so good.

Palate: The mouthfeel was thin and lacked anything memorable. The front of my palate encountered butterscotch, dried apricot, and almond, while the middle featured brine and walnut. The back had flavors of oak and white pepper.

Finish:  There was a definitive bitter quality to the medium-long finish. Once it dissipated, oak tannins, walnut, and brine remained.

Bottle, Bar, or Bust: I have no clue who distilled this and couldn’t begin to hazard a guess. It isn’t that it reminded me of a handful of distilleries; instead, none came to mind. Trader Joe’s Speyside Single Malt Scotch would make a decent base for a cocktail. I don’t buy whiskies for mixing; my rule of thumb is good cocktails are made with good whisky. If you remind yourself that this is only a $20.00 whisky, you may convince yourself it was a good buy. However, this is not one I’d opt to drink again and pulls the Bust card. Cheers!