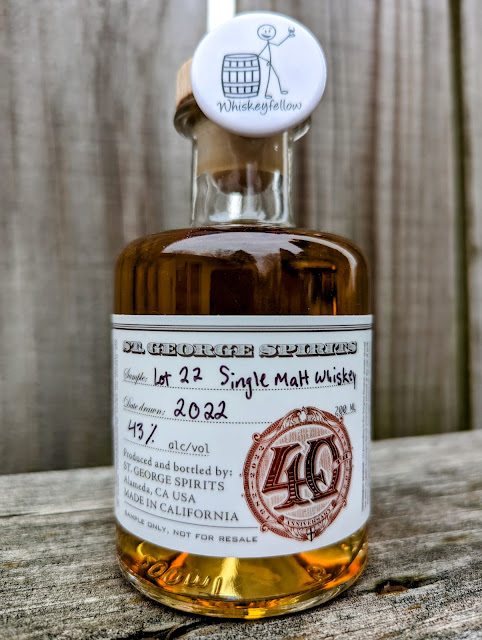 This California distillery, Jaxon Keys Winery, Charbay Distillery, and Germain-Robin were the four pioneers of the industry we know and almost take for granted today. St. George Spirits, under the guidance of Master Distiller Lance Winters, released its first lot of American Single Malt whiskey in 2000. Each year, St. George Spirits releases another as a limited edition, with this year’s bearing the badge of Lot 22.

The mashbill is derived from pale, crystal, chocolate, and black patent malts that were subjected to different roasting levels, and Bamberg malt that was unroasted, but smoked over beech and alder woods. That’s been the base of St. George’s American Single Malt since Lot 1. What makes Lot 22 different is the use of 26 different casks with vintage Kentucky Bourbon and Tennessee whisky barrels, along with both American and French oak casks that previously held apple brandy, port, and California Sauternes-style wines.

I’ve found the few American Single Malts I’ve tasted from this distillery to be tasty, and what it offers is definitely not a me-too whiskey. St. George Spirits produces the unusual. To see if Lot 22 follows the trend, we’ll have to do the #DrinkCurious thing. But, before that happens, I thank St. George Spirits for providing me with this sample in exchange for a no-strings-attached, honest review.

Appearance: A neat pour in my Glencairn glass revealed a brassy liquid that formed a medium-heavy rim before it collapsed into thick legs.

Nose: As I brought the rim of the glass to my nostrils, it smelled like I was at a dessert bar. Cherry pie filling, chocolate mousse, caramel, toasted coconut, hazelnut, and butter pecan rushed my olfactory sense, causing me a bit of sensory overload. When I drew the air into my mouth, I encountered orange rind.

Palate: A buttery texture greeted my tongue. Flavors of brown sugar, hazelnut, and almond were the first that I picked up, with white grapefruit, melon, and apple midway through. The back featured roasted coffee, milk chocolate, and clove.

Finish: The finish started with white grapefruit, ginger spice, apple, and French oak making various appearances. Most of it was short to medium in duration, but the citrus went beyond that.

Bottle, Bar, or Bust: My only gripe with Lot 22 is its shorter finish. I was daydreaming through the nosing and tasting experience, and then it was over, leaving only the citric fizz behind. At the same time, this is my favorite of what I’ve tasted from St. George’s Spirits. Is it worth the money? Yup and all of that equals a Bottle rating. Cheers! 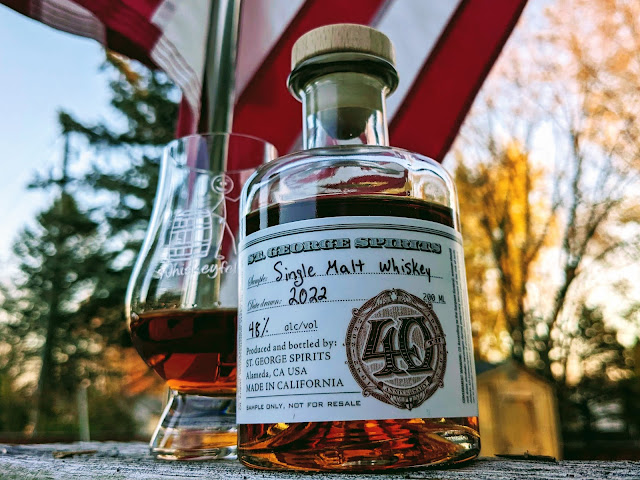 Forty years is a long time. It just happens to be how long ago the craft distilling boom began. Four distilleries started it: Germain-Robin, Jaxson Keys Winery, St. George Spirits, and Charbay Distillery.

Six hundred barrels were sampled and whittled down to just fourteen. Some barrels were four years old. The oldest is one of the first casks the distillery laid down. Various vintage cooperages once held umeshu, tawny port, and Californa Sauternes wine. This single malt is bottled at 48% ABV (96°) and should begin to show up on store shelves in mid-November. There are 1982 bottles available (did you catch the mathematical Easter egg?).

St. George Spirits will also donate $40,000 to STEPUP Foundation. Its mission is “[t]o provide underserved and underrepresented individuals with hands-on training and education, encouragement, and opportunities to enter the spirits community through a comprehensive internship program like no other in the alcohol beverage industry.”

I know you have a few questions, one of which is, How does it taste? That’s easily answered once I #DrinkCurious. But before I do, I must thank St. George Spirits for providing me with a sample in exchange for a no-strings-attached, honest review.

Appearance: This single malt presented as deep caramel when I poured it neat into my Glencairn glass. It took some effort to seduce a rim, which remained micro-thin. Watery legs fell but left sticky tears behind.

Nose: An aroma reminiscent of Fresca wafted from my glass. Buttered popcorn, brown sugar, caramel, and Almond Joy candy joined the fruity soda. When I pulled that air into my mouth, cocoa and toasted coconut rolled across my tongue.

Palate:  A silky but heavy texture greeted my palate. The front consisted of a thick blend of coffee, dark chocolate, and vanilla cream. Flavors of caramel, coconut, almond, and citrus peel hit the middle, while cinnamon, clove, and candied ginger were on the back.

Bottle, Bar, or Bust:  I believe St. George Spirits knocked one out of the ballpark with this single malt whiskey. Everything from the nose to the finish was stunning. I thought the light smoky oak of the finish was a near-perfect way to end things.

I mentioned one question you had was how this tasted. Another has to be, What does it cost? As you can imagine, a whiskey with distillate from the first runs isn’t inexpensive. The 40th Anniversary Edition Single Malt Whiskey has a suggested price of $500.00 for a 750ml bottle.

When we enter this super ultra-premium price category, it is beyond my means. You’ll want to try this if you’ve got a generous friend or if a great whiskey bar manages to obtain one. If you can afford it, I believe you’d walk away happy with a Bottle. Cheers!

A few years ago, before The Great Pandemic, I enjoyed attending whiskey festivals. I’m hopeful that I’ll be able to attend Distill America in Madison this May. It will be the first time since the last in-person Distill America in 2020, literally just before everything shut down around the country.

I mention Distill America because that’s where I was introduced to St. George Spirits, a smaller California distillery founded in 1982 by Jörg Rupf, a German immigrant. Jörg was interested in distilling brandy made from local fruits using traditional methodologies. Lance Winters came on board in 1996. He was a former nuclear scientist who had (get this) a single bottle of homemade whiskey in his inventory, presented it to Jörg, and then Jörg offered Lance a job. A year later, St. George Spirits distilled its first single malt, and in 2000, they released the first batch. Ten years later, Jörg retired, and Lance took over the reins as the head distiller.

The American Single Malt that I tried at Distill America was St. George Baller. I recall enjoying it, but truth be told, my palate is dead and buried at these kinds of events. And I kind of forgot about it once COVID became our new normal.

Fast forward to April 2022, when a sample of St. George Baller winds up on my doorstep. At this point, I’m excited because my memory of tasting it rushed back at me.

St. George Baller is a single malt whiskey made in a Scottish tradition but with Japanese highball cocktails in mind. Before you say, “What the…?” bear with me. It’ll make sense. It starts with a mash of primarily two-row pale barley and a bit of lightly roasted barley. That’s sent through the eau de vie pot stills before finding its way into former Bourbon and French oak wine casks, where it rested for three years.

The adventure isn’t over because the next step is to filter the whiskey via maple charcoal and then finish it in house-made umeshu (a Japanese plum liqueur) casks. The ume fruit was grown entirely in California.

The finished product is bottled at 47% ABV (94°), and a 750ml package costs about $69.99. The distribution used to be California-only but can now be found around the United States. Before I get started on my review, I want to thank St. George Spirits for a sample of this whiskey in exchange for a no-strings-attached, honest rating.

It is time for me to shut up and #DrinkCurious.

Appearance: Served neat in my Glencairn glass, St. George Baller presented as the color of yellow straw. It formed a medium rim that released fat legs that raced back to the pool.

Nose: A floral perfume intermingled with prune, lychee, and honeysuckle. As I drew the air past my lips, a tsunami of vanilla flowed across my tongue.

Palate:  I found the texture buttery with a medium body. The front of my palate tasted honey, vanilla, and almond, while the middle featured malty, fresh-baked bread, lychee, and brine. The back offered flavors of ginger beer, French oak, and smoke.

Finish:  The ginger beer carried through the end of the finish. Before it fell off, a blend of lychee, brine, and smoke joined a somewhat tannin-heavy feel.

Bottle, Bar, or Bust:  St. George Baller tasted like nothing I recalled. Instead of getting familiar notes, this was a brand-new experience, and that isn’t unusual when my only other sampling was while my palate was exhausted. However, that didn’t translate to an unpleasant tasting. Everything meshed seamlessly. St. George Baller is unlike any other American single malt I’ve come across. I believe this one you’ll want to savor, and as such, it earns my Bottle rating. Cheers!