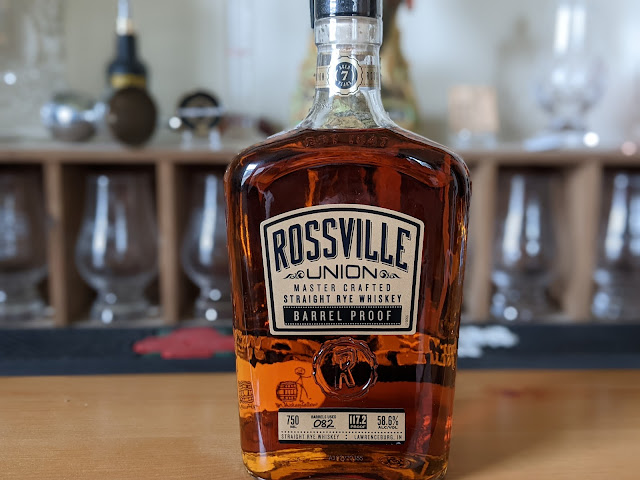 We’re used to calling that massive Indiana distillery in Lawrenceburg MGP. Before MGP, it was LDI. And, before that, it was Seagram. What about before Seagram? Before 1933, it was the Rossville Union Distillery, founded in 1847. The property adjacent to Rossville Union was Squibb Distillery, established in 1869 and purchased by George Remus. While we may refer to this distillery as MGP, it rebranded as Ross & Squibb Distillery last September.

Shortly before the rebranding, MGP purchased Luxco, the owner of Bardstown, Kentucky’s Lux Row Distillers, and solidified its reputation as a serious distillery. MGP then shifted its house brands to its Luxco umbrella, including George Remus and Rossville Union.

Today I’m sipping on Rossville Union 2022 Barrel Proof Rye. It is an annual, limited-edition release that is a blend of 82 MGP rye barrels aged at least seven years. There were 18,000 117.2° bottles released at the end of April and should hit store shelves about the time of this writing. The suggested retail price is $69.99.

"Rossville Union 2022 Barrel Proof is another example of the great rye-whiskey tradition we've carried on at Ross & Squibb Distillery and yet another reason Indiana is the rye capital of the world. As the popularity of rye whiskey continues to grow, we've selected another exceptional medley of rye mash bills to satisfy even the most discriminating tastes […] of rye-whiskey drinkers." - Ian Stirsman, Ross & Squibb Distillery’s Master Distiller.

I appreciate Luxco for providing me a sample of Rossville Union in exchange for a no-strings-attached, honest review. The only way we’ll find out if it is worthy of the reputation of MGP’s ryes is to #DrinkCurious. Let’s get to it.

Appearance:  The color appeared like deep caramel poured neat into my Glencairn glass. A medium-weighted rim generated slow, thick tears that crawled to the pool.

Nose:  The first thing I smelled was mint. Underneath that were aromas of vanilla cream, rye spice, chocolate, nutmeg, and oak. When I brought that air into my mouth, the rye spice seemed to have a megaphone.

Palate:  I found the texture to be silky. The front of my palate found caramel, vanilla, and milk chocolate flavors, which then became nutmeg, chalk, and cinnamon as they hit the middle. The back featured rye spice, fresh mint, and muted oak.

Finish:  That soft oak led the way and opened to rye spice and mint. As those fell off, clove remained behind for a medium-to-long finish.

Bottle, Bar, or Bust:  Rossville Union was interesting. Although the mint was a smidge too bold for my liking, the entire palate was a fascinating melting experience. It flowed naturally from beginning to end. Should I downgrade my rating for that mint? Nah, that would be unfair, especially since everything else seems lovely. The bigger question is, Is this a $70.00 rye?  Two or three years ago, I would have said no. These days, $70.00 ryes are far more common. Rossville Union is a must-have whiskey if you’re an MGP (sorry, Ross & Squibb) fan. If you enjoy spicy ryes, as I do, this one deserves a Bottle rating. Cheers!