If you're like me, you've probably never heard of Starward Distillery. Or, perhaps you have.  Starward comes from Melbourne, Australia, and they describe themselves as a distiller of "modern Australian whisky."  The founder, David Vitale, wanted to make whisky that was affordable and decided to age them in Australian wine casks. Today, Starward is part of the Diageo family.


Starward was established in 2007 and has several offerings. I'd like to thank Starward for providing me with a sample of its Two-Fold Double-Grain Whisky in exchange for a no-holds-barred, honest review.


As stated above, Two-Fold is matured in Australian wine casks and the mash is composed of 35% wheat and 65% malted barley. It is bottled at 40% ABV (80°), carries no age statement (although Starward's website suggests three "Melbourne years," whatever that means), and retail in the United States is about $29.99.


And now, let's see where the pedal hits the metal...


Two-Fold presented a brassy appearance. In my Glencairn glass, it left a thick rim that created medium, slow legs to drop back into the pool.


Aromas of coconut and malted barley started off, then plum and vanilla took over. It was a very interesting combination.  When I inhaled through my lips, a blend of vanilla and pineapple came on the scene.


The mouthfeel was thin and watery. Just like when I inhaled through my lips, flavors of vanilla and pineapple hit my palate. Behind those were dark chocolate and cinnamon spice. And then, on the back, it was a combination of red wine and oak, obviously from the wine casks.


The finish was mild, warming, and consisted entirely of oak.


Bottle, Bar or Bust:  If I took a guess as to how many Australian whiskies I've had, I'd say very few, and as such, I don't have a good baseline to see how it stacks up against others. Thankfully, the BBB rating system is not governed by that. I found Two-Fold to be very interesting, especially the palate, and the barley with the red wine barrels provided a pleasant experience.  Two-Fold is an easy sipper, the price is one most folk will find affordable, and that's an easy recipe for a Bottle recommendation.


Cheers!
Posted by Whiskeyfellow at 7:04 PM No comments: 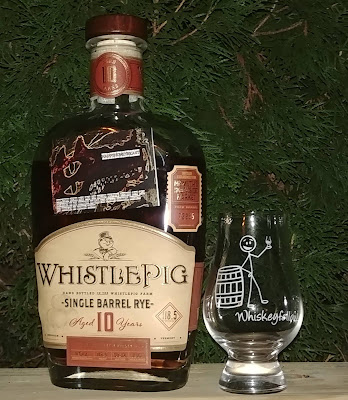 I am not a fan of Canadian Rye.  It isn't really any specific Canadian Rye, it is the category itself.  It is not due to some amount of whiskey snobbery (which I try desperately to avoid) but mostly because I find Canadian Rye just not very good.
There are basically three rules as it applies to Canadian whisky:
Wait a minute... there's nothing there about the mashbill!  You forgot that!
No, no I did not. Believe it or not, for Canadian Rye to be considered Canadian Rye, it requires not one single grain of actual rye.  Not one, single grain at all. There are also no rules about adding artificial coloring or flavoring.
When the folks at Niemuth's Southside Market in Appleton asked me to review their WhistlePig 10-year Single Barrel, I asked if it was from MGP or Alberta Distillers.  When they told me Alberta Distillers, my heart sank a bit. But, it had been some time since I've had anything to do with anything Canadian and it was time to suck it up and review the category.  You know, that whole #DrinkCurious philosophy thing.
Let's start off with the facts:  Niemuth's WhistlePig is nicknamed the Happy Honey Beast. It came from Barrel #72355 and rested in Warehouse 1, Rick G, and Level 2.  Did it rest in Vermont for all of its 10 years?  Likely not.  Did it rest in Canada at least three years?  Probably.  WhistlePig claims they rescued aged stock before bringing it to Vermont and then aging it in new, American oak with a Bourbon Finish. It was then bottled at 118.5° and this barrel yielded 132 bottles. Niemuth's has this priced at $89.99 for a 750ml.  Alberta's ryes are, despite the lack of Canadian regulations, 100% rye content.
It is also a Straight Rye.  From that, we can assume there is no artificial flavoring or coloring, and I'd assume it aged on the WhistlePig farm at least two years.
Appearance:  In my glass, this WhistlePig appeared as a deep amber.  It left a thin rim but created a thick, wavy curtain before dropping down to the pool.
Nose:  Aromas of dry oak, cinnamon were prevalent.  That dry oak was very strong.  But, behind that were walnut and cherries.  And then, just before fooling myself in thinking I'd identified it all, there was a punch of caramel.  When I inhaled through my lips, that caramel continued, which was followed by honeysuckle.
Palate:  The mouthfeel was very thin and oily.  Sometimes a thin mouthfeel thickens up and becomes coating after a few sips. That didn't happen with the Happy Honey Beast. At the front of the palate, flavors of cocoa and cinnamon were prevalent. That spice then changed up to spearmint. At mid-palate, it was coffee and rye spice.  And, then, out of nowhere, on the back, the honey appeared, making sense of this whisky's nickname.
Finish:  The finish of smoky rye spice, clove, and vanilla fooled me into believing it was very short.  But, before I took my next sip, it all came back to make for a very long, dry finish.
Before I get to my rating, for curiosity's sake I added two drops of distilled water to see what would happen by proofing it down.  The nose got very minty, but on the palate, the spearmint quality disappeared entirely, allowing the caramel to shine through. The clove on the finish changed up to the elusive spearmint and this time, there was no pause in the finish, it just kept building. The dryness on the finish went away, but it exaggerated the smokiness.
Between the two, I preferred it neat.
Bottle, Bar, or Bust:  I started off saying I am not a fan of Canadian Rye. There are several things going on with the Happy Honey Beast.  It threw me for at least three loops.  I'm used to that happening once, or occasionally, twice. But I don't recall any doing it a third time until now. That's exciting. Moreover, in a blind tasting, I guarantee I would not identify this as Canadian.  It gets bonus points from me there.  The $89.99 is a bit steep, but this seems to be an average price for WhistlePig 10.
This is a better barrel compared to several of the other WhistlePig 10's I've tried. For a Canadian Rye, I would say this is very good. If you're a WhistlePig fan, Happy Honey Beast is an easy Bottle.  For those who haven't tried WhistlePig yet, you'll probably want to sample this before you buy it, but since it is a store pick, you're not going to find this one available at a bar.


Posted by Whiskeyfellow at 7:54 AM No comments: