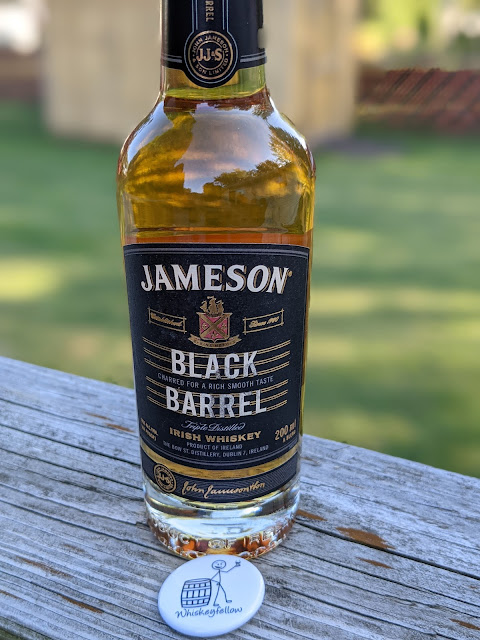 When you think of Jameson, the first thing that comes to mind may be their flagship release. Some folks look at higher-tier expressions, some of which can get quite pricy.

I have to admit, I'm not a regular drinker of the flagship expression. I have no problems with low-end Irish; I find several of them enjoyable. But, when I saw a 200ml of Jameson Black Barrel in the clearance section of a random liquor store for $7.00, grabbing it to do a review was a no-brainer. I had no preconceived notions. I simply said to myself, Good or bad, I won't miss the outlay. So, I put it in my cart along with everything else I found.

Jameson Black Barrel is distilled at the Bow St. Distillery in Dublin. It is a blend of primarily single pot still and a portion of "rare and sweet" grain whiskey that's not found in any other Jameson expression. It is aged in former first-fill Bourbon barrels that have been double-charred, meaning originally charred like any Bourbon would be, and then, once emptied, the barrel was charred a second time, hence the Black Barrel in the name. Jameson also utilizes some toasted sherry barrels.

Enough of the background; let's see how well I spent my money and #DrinkCurious.

Appearance:  Poured neat in my Glencairn glass, Black Barrel was the color of bronze. It formed a medium rim that released very fat, quick legs that crashed back into the pool.

Nose:  The air was very fruity before I even brought the glass to my face. What I found was genuinely tropical with pineapple, coconut, and banana. Loads of banana. Apple and malt were easily discernable as well. When I brought the aroma into my mouth, it came across as malted milk.

Palate:  The mouthfeel was incredibly smooth (I know some folks hate that term) and silky. It filled everywhere in my mouth but wasn't weighty. The front featured caramel, coconut, and allspice. Stewed peaches and vanilla cream were in the middle, and the back gave flavors of cinnamon, nuts, and char.

Bottle, Bar, or Bust:  This is very likely the best $7.00 I've spent on a bottle of whiskey. I have no idea why this was on the store's clearance rack, but I'm thankful for the opportunity. I loved everything about Jameson Black Barrel except for one thing. I really adored the finish and wanted it to last longer. Now, as far as a $34.99 bottle goes, I'd still rank it a Bottle all day long. Cheers!