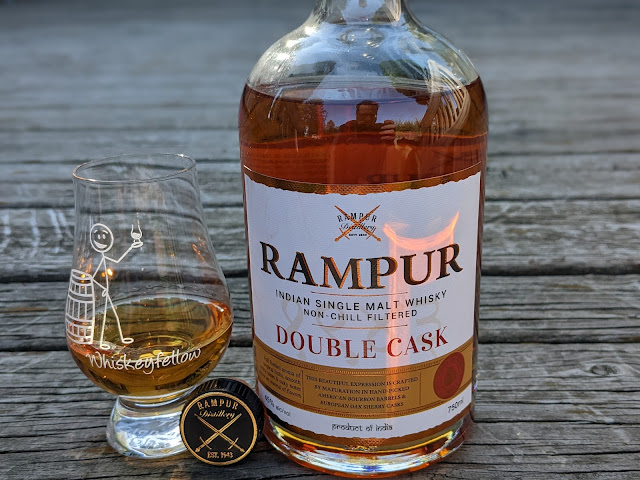 If you’re new to Indian whisky, there is the whisky that’s sold only in India, which is usually distilled from molasses. Then there is Indian Foreign Made Liquor (IMFL), the type of whisky with which much of the rest of the world is familiar.

Founded in 1943 as Rampur Distillery & Chemical Company, Ltd., this Indian distillery didn’t start producing its own brands until 1998. Instead, it made extra neutral alcohol and bulk alcohol that it sold to other brands. But that changed when its new owner, Lalit Khaitan, and his son, Abhishek, learned that more Scotch whisky was consumed in India than what was produced in Scotland!

Think about that last thought… and then consider why there is a massive market for counterfeit spirits worldwide.

The Khaitans had an idea: they wanted to provide Indians with inexpensive Scotch-like whisky since there was, at the time, nothing that could satisfy the demand. After much financing and taking on partners such as Diageo and Whyte and Mackay Group, Radico Khaitan Ltd., as the company was now known, entered the international whisky market. Radico Khaitan operates two distilleries, Rampur in Uttar Pradesh and Radico NV Distilleries Maharashtra Limited in Aurangabad.

The climate in much of India is stiflingly hot. And, if you are in the Himalayan region, it can also get darned cold. Uttar Pradesh is at the base of the world’s highest mountain range and is exposed to both. In the summers, Indian whisky ages much faster than its Scottish counterpart, some claim by a factor between three and five times. When you consider the cold temperatures, too, that only compounds the equation.

The Rampur brand is considered Radico Khaitan’s premium drink division. Today I’m reviewing Double Cask, an Indian Single Malt made from 100% malted barley that’s been run through a copper pot still. The newmake is aged in ex-Bourbon for two-thirds of its long sleep and ex-Oloroso sherry casks for the remainder. It carries no age statement (similar to most Indian whiskies), is packaged at 45% ABV (90°), and is non-chill filtered. The suggested price is $79.99 for a 750ml bottle.

For the record, I’ve had stunning Indian whiskies and others that are far less impressive. The only way to know where Rampur Double Cask falls on that scale is to #DrinkCurious. However, I would be remiss not to thank Rampur for providing me a sample in exchange for a no-strings-attached, honest review.

Appearance:  This single malt appeared rusty brown when served neat in my Glencairn glass. A thicker rim formed, which yielded wide, fast legs that crashed back to the pool.

Nose: The second this whisky left the bottle, its aroma wafted and filled the room. I let this sit for about 20 minutes before I pulled the glass close to my face. As I inhaled, I discovered pine, stewed pear, and nutmeg. Further exploration offered malt, nut, and toasted oak. The stewed pears slammed across my tongue as I sucked the air into my mouth.

Palate: A thicker, silky texture greeted my mouth, and I immediately tasted grapefruit, roasted coffee, and cacao on the front of my palate. The middle hinted at strawberry, which was quickly overcome by more of the stewed pear. On the back, flavors of toasted oak, nutmeg, almond, and a kiss of clove were evident.

Bottle, Bar, or Bust:  If you asked me if Rampur Double Cask is more similar to one of the two other Indian Single Malt brands (Amrut and Paul John), I’d tell you that the three are more cousins than siblings. I’d say Rampur is more of a distant cousin. That should not be interpreted as a lesser whisky, just that it is decidedly different.

I admit I was concerned with how this whisky would taste during the nosing. I’m not a gin fan because I dislike juniper, and the pine quality left me wondering. Thankfully, the pine was restricted to only the nose. The tasting experience, on the other hand, was lovely. I enjoyed the combination of citrus and berry fruits; the spice notes were significant yet not overwhelming. In all, they melded together nicely, creating a happy sipping event. At $79.99, I’m delighted to have this in my whiskey library and believe it has earned every bit of its Bottle rating. Cheers! 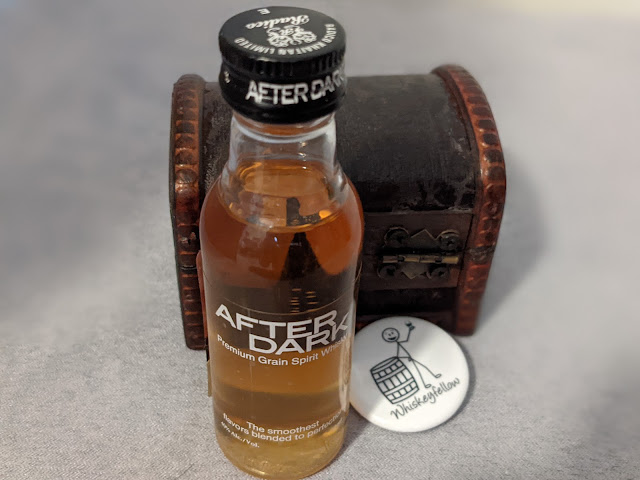 I’ve written about Indian whiskies several times. One of the things I often mention is the lack of much regulation as far as what Indian whisky means. It could be a true single malt, it could be single grain, it could be fermented molasses, or neutral grain spirits (NGS). As far as Indian single malt is concerned, I’m a big fan for the most part.

One of the oldest Indian distilleries is Radico Khaitan Limited, founded in 1943 and used to be called Rampur Distillery.  It is also the largest manufacturer of Indian-made foreign liquor (IMFL). As such, it does its own distilling, blending, and aging in Rampur.

While perusing the aisle of a random liquor store, I stumbled across After Dark, labeled as a Premium Grain Spirit Whisky.  I’ve had spirit whiskies before and have been relatively unimpressed. As it turns out, India’s definition of spirit whisky and America’s are not the same. America’s is very specific. India’s is more of a general whisky definition that deals with IMFL.

“After Dark is a promising brand in the fast growing premium segment in India. It is a drink to be savoured with friends. The night has different connotations for different people. It unfolds and brings a unique world of desire, adventure and excitement. In fact, it’s where the fun and action begins. After Dark Whisky was rewarded with the Silver Medal at the Monde Selection Quality Award, 2011.” – Radico Khaitan Limited

So, how does After Dark hold up against the other Indian whiskies I’ve tried? The only way to find out is to #DrinkCurious.

Appearance:  Poured neat in my Glencairn glass, After Dark was gold in color. There is no indication this carries any e150a (or other) added colors. It created a thick rim that made even heavier legs that fell back to the pool.

Nose:  Clean linen was the first thing I smelled. Probably like you, I’ve never listed that as a note before, but that’s what was there. Muted caramel and floral qualities hid beneath. When I took the air into my mouth, that lighter caramel remained.

Palate:  The texture was soft and light-bodied. I tasted leather at the front of my palate, the middle featured honeysuckle, and the back combined clove and black pepper. There wasn’t much there from front to back.

Finish:  Very astringent and bitter, I was able to identify clove through it. It was, thankfully, short.

Bottle, Bar, or Bust:  The finish overwhelmed anything that could have been positive in my experience. There’s nothing wrong with a bit of a medicinal quality. Chewing on a mouthful of Band-Aids is not something I relish. To be blunt, there wasn’t much to like about After Dark. Could it make a sound mixer? I suppose that depends on how much “and Coke” you want to add to it. After Dark takes a solid Bust rating. Cheers!