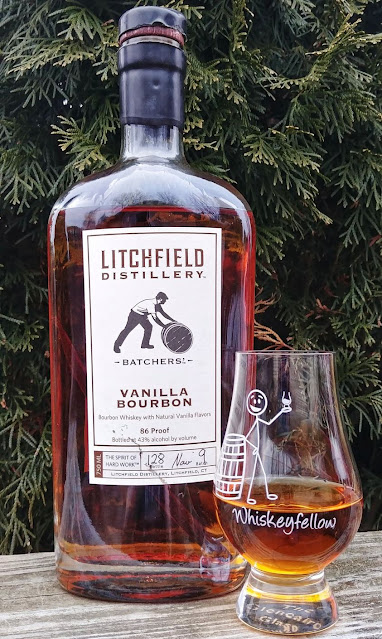 I don’t often get into flavored whiskeys. I don’t particularly have anything against them, and, in fact, I’m a fan of a handful (no, not Fireball). For example, William Wolf produces some enjoyable flavored whiskeys that I will pour every so often. But, for the most part, this is an overlooked category for me.
For today, I’ve cracked open Litchfield Distillery’s Vanilla Bourbon. I’ve reviewed some of Litchfield’s whiskeys before, and they’ve been hit-and-miss. Litchfield Distillery is located in Connecticut and they have their own distillate using a mash of 70% corn, 25% rye, and 5% barley. They age their Bourbon at least three years in #4 charred oak before being bottled at 86°. Retail is about $41.99, and distribution is in Connecticut, New York, Massachusetts, and Rhode Island. Litchfield Distillery provided me with a sample for a no-strings-attached review, and I thank them for the opportunity.
The label states this is “Bourbon Whiskey with Natural Vanilla Flavors." In fact, inside the bottle is a whole vanilla bean. The flavoring itself comes from Madagascar vanilla extract. As I’m typing this introduction, thick vanilla is wafting through the room, making my mouth water. While the aroma is enticing and I’m actually looking forward to this tasting, the proof is in the pudding - or in this case, whiskey, and it is time to #DrinkCurious.
In the glass, the appearance presented as a soft amber and left a fat rim on the wall of my Glencairn. That rim generated thick, fast legs that raced back to the pool.
I went through my various nosing zones and vanilla was obvious, as expected. At chin level, it smelled like vanilla frosting. Aromas changed significantly as the glass inched closer to my nostrils: I picked up oak, a hint of banana, and sugar cookies. Inhaling through my mouth changed it up again where I picked out corn and caramel.
The mouthfeel was light and airy. Up front, there was less vanilla than I expected as it hit my palate. I was expecting artificial vanilla and this wasn’t that. The vanilla strengthened as it hit mid-palate, and was soon followed by what I can only describe as cake. On the back of the palate was a Bourbon profile of oak and black pepper.
The finish lasted about a minute and was black pepper-heavy, leaving none of the vanilla from the front- and mid-palate. I waited, hoping for the vanilla to make a return trip, but it never materialized. Surprisingly, at 86°, it left my palate buzzing like something 20 points higher.
Bottle, Bar or Bust: This one’s tough. I found Litchfield’s Vanilla Bourbon to be pleasant. I let my wife have a sip and she commented it would be good for baking or desserts. I didn’t find it offensive by any means, but it also isn’t something that wowed me. I could see this being a very nice, easy sipper for folks who aren’t Bourbon purists or even for folks who don’t like Bourbon. My biggest hurdle is the price. At $42, you’re competing against a majority of the Bourbons on the shelf. I can’t ever see myself reaching for this at that price point. It is absolutely something different, and as such, I rate it as a Bar.
On a side note, my English Springer Spaniel, who hates whiskey, was all over this when I offered him a sniff. He rarely does that - he finds very little appeal in whiskey aromas. When I got up, he ran over to my glass while his nose was working.
Cheers!

Posted by Whiskeyfellow at 10:56 AM No comments: 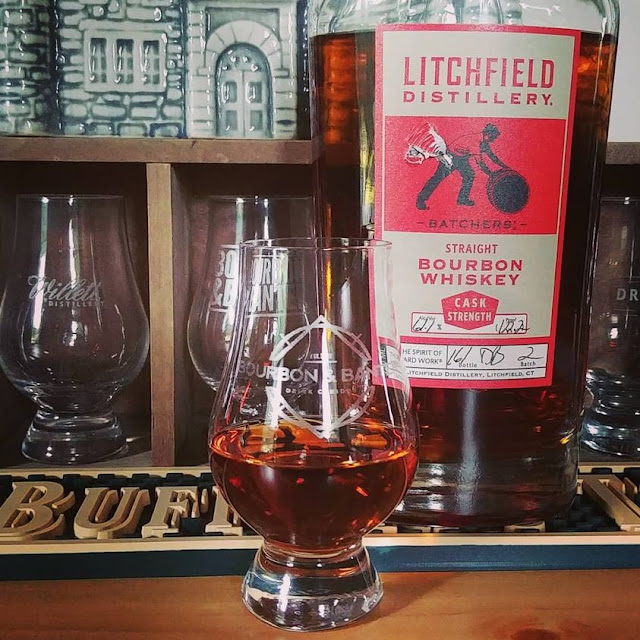 I know the first question many of you have is, “Is this MGP?” The answer is a definitive, “No.” Litchfield does not source its whiskey. They obtain their corn, rye, and barley from local farmers to create their own mash and distillate.
The appearance was a very deep, dark amber that certainly gave the impression it was much older than three years. It left a very thin rim on the glass and created thick, heavy legs...

You can read the entire review at Bourbon & Banter. Cheers!

Posted by Whiskeyfellow at 9:33 AM No comments: