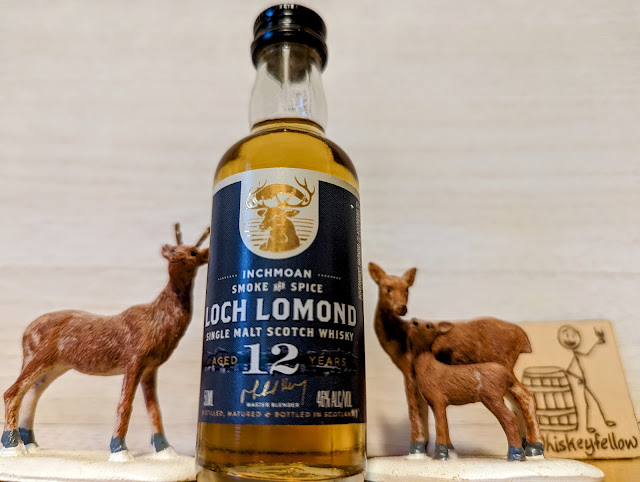 A distillery’s history can be traced and tracked to the present day. There are public records to peruse; there are fans and historians who have written about them, and there’s the Internet. Occasionally, you run across a distillery with a clouded history. Such is the case with Loch Lomond Distillery.

What is known is the distillery was first established in 1814 near Tarbet, which is at the north end of Loch Lomond. Beyond that is anyone’s guess. Record-keeping was minimal, and no one is sure when it eventually was dismantled. However, in 1965, the former owners of Littlemill Distillery founded the new Loch Lomond Distillery, located in the village of Bowling, Scotland, placing it in Scotland’s Highland region.

Loch Lomond Distillery was shuttered in 1984, and it wasn’t until three years later that Alexander Bulloch and the Glen Catrine Bonded Warehouse, Ltd. purchased it and resumed distilling malt whisky. Then, in 1993, it added grain whisky to its portfolio. At that time, Loch Lomond was the only Scottish distillery producing malt and grain whiskies.

The distillery also has an operational cooperage, placing it in an unusual position compared to most others. It processes about 10,000 barrels annually. Loch Lomond’s master blender is Michael Henry, and the distillery credits both him and its unique pot stills as what differentiates its whisky from what others offer:

“The uniqueness of our pot malt stills rest in the cylindrical necks of the spirit stills. Traditionally the necks of malt stills are open. The Loch Lomond stills include special distillation trays in the necks, allowing for greater contact with the cooling alcohol vapour. This makes the process more efficient.

These stills can produce alcohol up to 90% ABV where normal stills deliver the alcohol at around 70% ABV. This style of still allows for different ‘flavour notes’ to be captured and emphasised through the range of alcohol strengths that can be captured and rejected. This is much more difficult to achieve through a conventional pot still.” – Loch Lomond Distillers

The Loch Lomond Distillery is part of the Loch Lomond Group, which also owns Campbeltown’s Glen Scotia, Highland’s Inchmoan, and a host of other brands.

Today I’m exploring Loch Lomond Inchmoan 12-Year Single Malt Whisky. This Scotch is aged at least a dozen years in both refill and re-charred American oak casks. The distillate comes from both the traditional swan-neck pot still and its straight-neck pot still. Non-chill filtered and packaged at 46% ABV (92°), a 750ml bottle can be acquired for around $45.00. It is billed as a sweet and smoky whisky, which makes sense since it utilizes peat-dried malted barley.

I procured a 50ml taster at a random liquor store in 2022. Let’s #DrinkCurious and discover what this whisky is all about.

Appearance: I sipped this Scotch neat from my Glencairn glass. The liquid appeared as deep copper, and a wide rim remained on the wall as I tilted the glass, and it just stuck there like glue. Some legs formed, but they didn’t do much. Admittedly, that was unusual and unexpected.

Nose: As I brought my face to the glass, I wallowed in the aroma of earthy peat, rich vanilla, and a touch of saline. Further sniffs unveiled light oak and pear. When I parted my lips and inhaled, there was more pear. Nothing was overpowered; things just meshed as if by design.

Palate: The mouthfeel was thin and on the weak side. The front of my palate plucked earthy peat, citrus, and pear. Midway through, I tasted salted caramel and nuts, while the back featured barrel char, fresh-cracked black pepper, and clove.

Finish: The peat was the most identifiable note in the finish; however, you can’t discount the clove, oak, black pepper, and brine that remained. Medium in duration, it provided a kiss of smokiness that made me smile.

Bottle, Bar, or Bust: Some people don’t like peated whiskies. I’m not in that category; I love it and once I smell it in a glass, what I’m drinking gets my full, undivided attention. My only real gripe is that the finish was too short. It forced me to return for another sip to keep the flavors going. But, what I did taste was enjoyable. In my opinion, you’ll get your $45.00 worth and then some, which makes this an easy Bottle rating. Cheers! 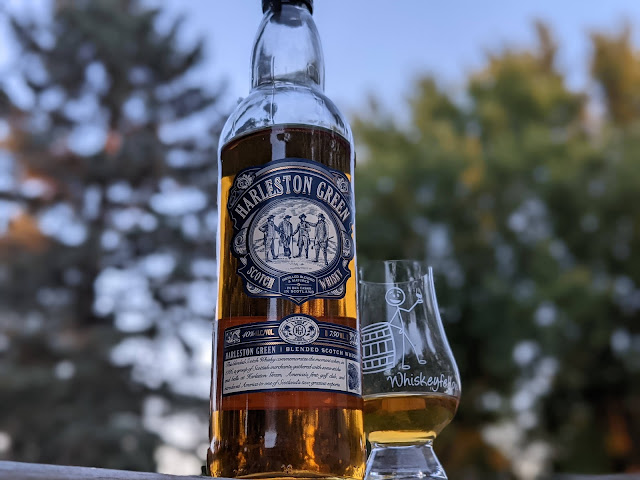 The opportunity to #RespectTheBottomShelf is one I take seriously. When I first became a fan of whisky, I was anything but wealthy (I’m still not). I had no idea what I was doing, just that I didn’t want to spend gobs of money on something that was going to be questionable. I invested in whiskies that were generally under $30.00. As my palate matured, I never left my quest to find gems that many would overlook due to price.

Something else I always appreciate is transparency. That’s becoming more common for American whiskeys, but things are less so outside the country. Imagine my shock when a bottle of Harleston Green blended Scotch whisky showed up, and while inspecting the bottle, I saw “Distilled and Bottled by Loch Lomond Distillery” on the back label.

“In 1786, a group of Scottish merchants absconded with two of European high society’s most treasured pleasures, golf and Scotch, and brought them together at Harleston Green in Charleston, South Carolina for all people to enjoy. We’d nominate those merchants for sainthood if it didn’t risk getting in the way of their drinking and carousing.” – Harleston Green

Composed of three, four, and five-year-old whiskies from the Highland, Lowland, Speyside, and Campbelltown regions, Harleston Green is bottled at 40% ABV (90°) and is quite affordable at $24.99 for a 750ml package.

Some of you may find it hard to swallow the notion that a three-year Scotch at this pricepoint will be even remotely good. The only way to find out is to #DrinkCurious, so let’s get at it. But, before I do, I must thank Harleston Green for sending me a sample in exchange for a no-strings-attached, honest review.

Appearance: In my Glencairn glass, when poured neat, this Scotch was the color of honey. It formed a thicker rim, something not surprising for a low-proofed whisky, and wild, long legs that crashed back to the pool.

Nose: A puff of smoke was the first thing I smelled. Beneath that were dried apricot, peach, honey, nut, and English toffee. Vanilla was hidden underneath. When I drew that air into my mouth, honey rolled across my tongue.

Palate:  A creamy, medium-bodied texture introduced itself, offering honey, vanilla, and citrus on the front of my palate. Midway through, I tasted nutmeg, green peppercorn, and apple, while the back featured smoke, cinnamon, and roasted almond.

Finish:  The smoke carried all the way through. I need to make it clear that it was far from overpowering. It didn’t taste like peat. It didn’t dry my mouth. It was merely a flavor. Apple strudel and almond hung around, making for a surprisingly long finish.

Bottle, Bar, or Bust:  The first thing I’ll say is I’ve shared this Scotch with a few friends, one of whom is a well-known distiller. The consensus was it was pretty damned good, especially for a young whisky. I was well-blended, and while there is a smoky quality to it, it would not turn off those who dislike peat (or who are newbies).  Harleston Green is a great Scotch to explore if you’re new and curious. Harleston Green is a tasty gem for those who are more experienced. I have no doubt that you’ll enjoy this one, as such it earns its Bottle rating. Cheers!