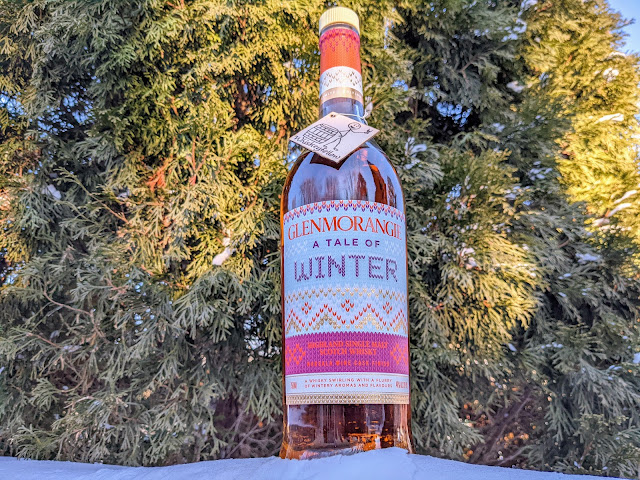 On the Glenmorangie campus, there exists a building called The Lighthouse. It is where Dr. Bill Lumsden hangs out, dreaming up new concoctions which eventually lead to something hitting store shelves. The Lighthouse is the experimental sector of the distillery. It is made of glass walls and overlooks the world outside.

If you’re unfamiliar with Glenmorangie, it is located in Scotland’s Highland region. Unofficially founded in 1703, it began as a brewery on the Tarlogie Spring. In 1843, two former gin stills were installed, and it changed from a brewery to a distillery named, aptly, Glenmorangie. The distillery shuttered between 1931 and 1936, then resurrected until 1941, when it closed again until 1944. In 1977, it added two more stills, then doubled in 1990 and again in 2002, bringing the total to an even dozen. Glenmorangie claims ownership of having the tallest stills in Scotland.

“Snowed in at home, our Director of Whisky Creation, Dr. Bill, began dreaming of this whisky. His goal was to capture the snug and magical feeling of sitting in front of the fireplace as snow blankets the world outside. In pursuit of rich, radiant taste and wintery aromas. He finished the 13-year old single malt in Marsala wine casks from Sicily.” - Glenmorangie

This single malt weighs in at 46% ABV (92°) after spending 13 years in first-fill Bourbon barrels before being dumped and transferred to former Marsala wine casks. You can expect to pay about $100.00 for a 750ml package, and that’s also what I paid at a local Wisconsin bottle shop.

How did Dr. Bill do? The only way to know for sure is to #DrinkCurious, so let’s get to it!

Appearance: Poured neat in my Glencairn glass, this whisky presented as a distinctive copper. A medium rim vanished instantly and gave way to a falling ruffled curtain.

Nose:  Very fruity; the nose began with aromas of apricot, raisin, plum, orange peel, and green grape. There was also vanilla and nutmeg. When I drew the vapor into my mouth, I could swear I took a bite of a Dreamsicle.

Palate:  The texture was oily and full-bodied. On the front, I tasted orange, honey, and thick fudge. The middle formed almost a transition with plum, dark cherry, and butterscotch. Then, it was spicy with ginger, cinnamon, clove, and oak on the back.

Finish:  Clove, ginger, oak, and rum-soaked fruitcake formed a soft finish that slowly built warmth, very much like that fruitcake. The buildup was slow until it hit its crescendo and then fell apart.

Bottle, Bar, or Bust:  I can easily place myself in Dr. Bill’s shoes. A Tale of Winter is something you’ll want to enjoy in front of a warm fire, snuggled in a blanket, maybe even with a dog on your lap, while you’re watching a gentle snowfall. The sweetness of the Marsala wine shone through and made everything seem Christmassy. I can also see how some people will love this, and others won’t find it overly appealing. For me, I’m in the former category. I’d sip on this all day, given a chance. A Tale of Winter takes my Bottle rating, and I’m thrilled to have it in my whiskey library. Cheers!