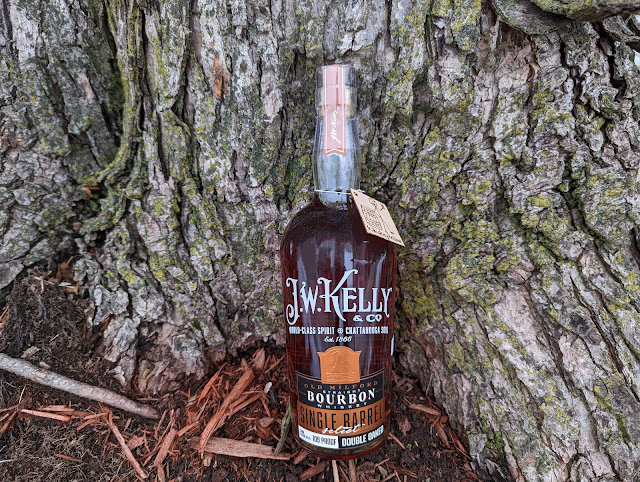 Last year, I had an opportunity to review Melrose Rye from JW Kelly & Co. It was a fantastic pour and snagged my 2022 Whiskeyfellow Runner-Up Award for American Rye. You can peruse the review and the background of the JW Kelly & Co. brand here.

Today I’m exploring its Old Milford Single Barrel Select Bourbon. Old Milford is distilled at an undisclosed Texas distillery before coming to JW Kelly & Co.’s Chatanooga facility. Its mash is comprised of 75% corn, 20% rye, and 5% barley. It is a “double-oaked” whiskey that spent between five-and-eight years in 53-gallon oak barrels before being transferred to new American oak casks for another eight-to-twelve months before being dumped and bottled at 54.5% ABV (109°). A 750ml bottle runs in the neighborhood of $50.00.

So, is Old Milford Single Barrel Select any good? The only way to judge is to #DrinkCurious. Before I do, I am grateful to JW Kelly & Co for providing me with a sample of this Bourbon in exchange for a no-strings-attached, honest review. For the record, my sample came from Cask 403 and was dumped on April 26, 2022.

Appearance: Served neat in my Glencairn glass, Old Milford presented as a coppery liquid. A medium rim formed, and while it released wide, slow tears, there were also tiny, sticky droplets left behind.

Nose: Surprisingly, the oak that was released was soft. I say surprisingly because I expected that to be more prominent with the double-oak maturation. I also smelled caramel, molasses, something floral, and citrus. When I drew the air into my mouth, brown sugar danced across my tongue.

Palate: A thick, syrupy mouthfeel led me to taste bold oak, vanilla, and fresh leather on the front of my palate. Midway through, I found almond, nutmeg, and butterscotch, while on the back, I tasted cinnamon spice, allspice, and clove.

Bottle, Bar, or Bust: Old Milford Single Barrel Select is a $50.00 Bourbon, and that’s a crowded place on the store shelf. There is no way in the world I would have guessed this was 109° - it drank closer to the mid-90s. Whether Cask 403 is five years old or eight, it doesn’t matter; age is just a number.

The heavier oak notes on the palate and finish would appeal to fans of things like old-school Elijah Craig Barrel Proof Bourbons. Granted, the proof is much lower, but so is the cost. I’m in that boat, and that reminder coaxed me to give Old Milford Single Barrel Select my Bottle rating. Cheers!