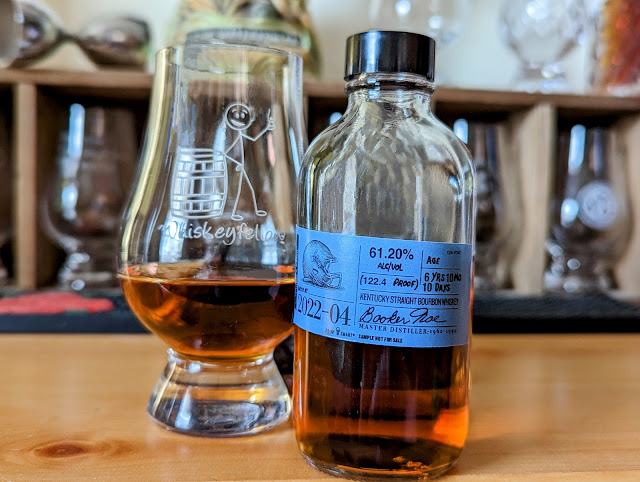 Unless you’ve been living in a cave for the last, oh, hundred years, and even if you don’t drink whiskey (shame on you!), I’ll assume that you’ve heard of Jim Beam. The Beam family traces its distilling roots back to the 1780s with the grand patriarch, Jacob. Since then, the only thing that has ever interrupted one of the Beams distilling their legendary whiskey was Prohibition.

“[It was made] to honor Booker Noe’s dad, the original Frederick Booker Noe, better known as Pinkie to his family and friends. No one is quite sure where his nickname came from, but he’s remembered as someone who always followed his passions. Although he wasn’t in the bourbon business like Booker, the two would bond over hunting quail and watching football which always brought them together at the end of the day.” – Booker’s Bourbon

Booker’s is made from the traditional Beam mash of 75% corn, 13% rye, and 12% malted barley and aged in new American oak with a #4 char level. It carries a 6-year, 10-month, and 10-day age statement and is uncut and unfiltered, although the Bourbon was run through a screen to catch any wood particles. Pinkie’s Batch is bottled at 122.4° and carries a suggested retail price of $89.99.

Before I get to the #DrinkCurious part, I must thank Booker’s for providing me with a sample in exchange for a no-strings-attached, honest review.

Appearance: I sipped Pinkie’s Batch neat in my Glencairn glass. It presented as a rusted amber liquid that formed a microthin rim. The thick, wavy curtain slowly dropped down the side of the glass.

Palate: The slick, oily mouthfeel greeted my tongue and… hang on a second. Isn’t this supposed to be over 122°? My gosh, it drank like it was somewhere in the 90s! Vanilla sugar cookies were on the front of my palate. The middle featured plum and honey-roasted peanuts, while the back offered barrel char and cinnamon spice.

Finish: Lasting several minutes, the finish consisted of sweet vanilla and plum that contrasted with charred oak and cinnamon spice. That cinnamon spice continued to build, much like cinnamon toothpicks that soaked longer than anticipated. Once that fell off, the charred oak remained.

Bottle, Bar, or Bust: Pinkie’s Batch is the second Booker’s review I’ve penned, and I don’t want it to be my last. It differed significantly from Kentucky Tea (Batch 2022-03), although both shared the surprisingly lower-proof experience. I can’t say I’ve ever encountered such a discrepancy between actual and tasted proof as with Pinkie’s Batch. To say this is an easy sipper is an understatement. I cherished what was in my glass; I believe you will, too, and as such, my Bottle rating is a no-brainer. Cheers!