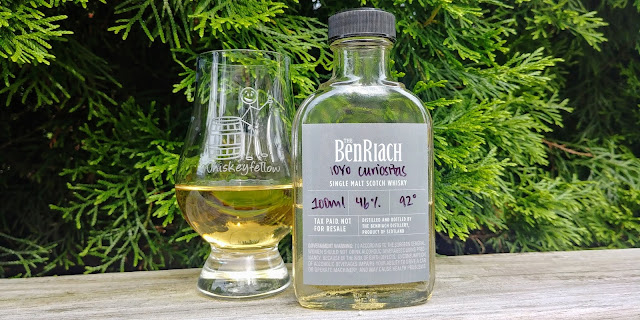 Peated whiskeys are almost synonymous with Scotch. If you asked the average person what they thought of Scotch, I wouldn't be shocked to find a majority would tell you they're smoky and ashy. That's peat.
But, that's also not what a good portion of Scotches are all about.  In fact, in Scotland's Speyside region, the region that is home to the highest concentration of distilleries, peated whisky is an anomaly.
The folks at The BenRiach like to do things differently.  Owned by America's Brown-Forman, they're different just by being American-owned. If you want to know the background of this distillery, you can read my review of their Peated Cask Strength Scotch from July 6th.
Today I'm reviewing its Curiositas 10 Single Malt.  If you're looking at the name and thinking that sounds more Latin than Gaelic, you'd be right. That's also something that The BenRiach does differently than its counterparts. This is, unsurprisingly, a 10-year old single malt that is blended from whiskies aged in Bourbon barrels and Sherry casks. Using about 55ppm of peat, the malted barley is dried by Highland-sourced peat (versus Islay-sourced peat).  As such, it lacks much of the salinity that many peated Scotches offer.  It is bottled at 46% ABV (that's 92° for Americans) and retails for about $54.99.
Before I get started, I'd like to thank Brown-Forman for providing me a sample of Curiositas 10 in exchange for an honest, no-strings-attached review.  And now, time to #DrinkCurious.
Appearance:  In my Glencairn glass, this Scotch appears as the color of straw.  With Scotch, distilleries are allowed to add inert caramel coloring, and I have no information suggesting whether or not this is naturally- or artificially-colored. I'll hazard a guess that, based upon the very light color, it is likely natural.  It left a medium rim and created slow, thick legs to drop back to the pool of liquid sunshine.
Nose:  I could smell the peat before I even got started. This was more earthy than iodine and astringent.  Once I got past the smokiness, aromas of banana cream pie (yeah, the whole freaking pie), nutmeg, and allspice made me smile. When I inhaled through my lips, a blast of vanilla ran across my palate. There was no associated peat.
Palate:  Even before I got to figure out the mouthfeel, the peat was there - light but also definitive. Once I got past the palate shock, I discovered a thick, oily mouthfeel that coated everywhere.  Vanilla and apple grabbed my attention. As it moved mid-palate, flavors of old leather and tobacco leaf, something you'd more expect from an American whiskey than Scotch, took over. On the back, it was a blend of banana and very dry oak.
Finish:  A very long finish of dry oak and clove spiced things up and was almost natural considering everything else going on. This was very well-balanced.
Bottle, Bar, or Bust:  I understand that peat isn't for everyone. It wasn't my thing when I first got started in Scotch (which, incidentally, is where I got my start in whisky appreciation). But it grew on me.  Curiositas 10 would be an excellent introduction for those who are peat-curious.  It is there, but not overwhelming. You can easily pick out other flavors. There are no iodine or seaweed notes that you'd find in many Islay or other Island Scotches. It is also unusual for a Speyside.
I enjoyed the heck out of this, and when you factor in the affordable (for Scotch) price tag, and then you further consider this isn't your average 80° Scotch, this one becomes a very easy Bottle recommendation. Cheers!

My Simple, Easy-to-Understand Rating System:
Posted by Whiskeyfellow at 6:52 AM