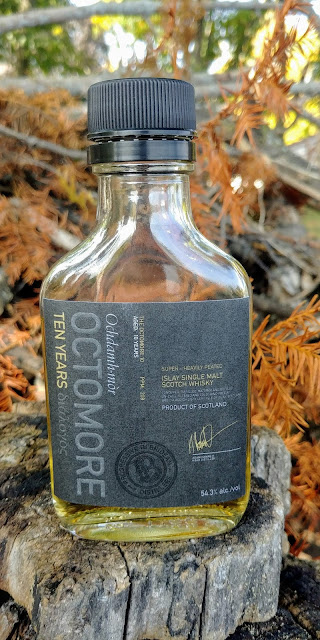 This is the final chapter of a three-part review series of the Octomore 11 release from Bruichladdich. For those of you who are unfamiliar with it, Octomore is an annual release of whiskies. But, it isn't just another whisky - Octomore boasts to be the heaviest-peated Scotches around.
Two days ago, I reviewed Octomore 11.1, and I also explained what peat was. Feel free to swing back to that review for a detailed explanation, as well as what makes Octomore truly different in terms of Scotch. Yesterday, I reviewed Octomore 11.3.
And that brings me to Octomore Ten Years. Octomore Ten Years is released every other year (it cycles with Octomore x.4 as a biannual release). Before we get there, I'll invite you to check out how to decode the Octomore numbering system, which was composed by Scotch Trooper and MarvelAtWhisky.
As a single malt, it starts with 100% Scottish-grown Optic Barley. It was then aged ten years using a combination of virgin oak, first- and second-fill American oak from Jim Beam, Heaven Hill, Buffalo Trace, and Jack Daniel's.  It is natural-colored, non-chill filtered, and cask strength at 54.3% ABV (108.6°). The yield was 12,000 bottles.
And then, it becomes time to separate the adults from the kids. We're talking phenols, which is the technical term for peatiness and are measured in parts per million (PPM).  A few of the heaviest-peated Scotches out there top off at 55 PPM (think Ardbeg).  Most are well below that. Then you have the super-heavy peated Octomore collection:
Just as I did in my 11.1 and 11.3 reviews, I want to pony up some transparency: I was provided samples of these three Octomore releases in exchange for reviews. I've been recruited as part of a group of US-based whiskey writers dubbed The Octomore Eleven. We were selected to assist with the launch of Octomore 11. However, my review is 100% mine, it is as always my true tasting notes and experience. As you know, my reputation is everything.
I want to make one other thing clear. It would be a huge mistake to pour Octomore into a glass and drink it without letting it breathe. Bruichladdich recommends eight minutes. I recommend between ten and fifteen.
And, with all that out of the way, it is time to #DrinkCurious tell you how this peat bomb holds up.
Appearance:  In my Glencairn glass, Octomore Ten Years presents as a dull gold. This is very likely from the virgin oak casks, as the 11.1 and 11.3 were very pale. It left a medium-thick rim that created a fat curtain (I couldn't even call them droplets) that crashed back to the pool.
Nose:  File this one under duh! because the first thing I smelled was the peat. Once my olfactory sense got used to that, it was easy to find citrus, pear, apple, vanilla, honey, and toasted oak.  When I inhaled through my lips, the air brought a rush of vanilla to race across my palate. It was a bomb of vanilla.
Palate:  My initial sip suggested a Scotch with a medium body. Subsequent tastings became creamier. And, as expected, the first flavors were very smoky with some ash. Once the palate shock subsided, I tasted an earthy malt along with vanilla on the front. As the whisky moved to mid-palate, cocoa powder and nutmeg quickly morphed to citrus and apricot. Then, on the back, a blend of toasted oak, brine, and white pepper.
Finish:  Of the three, I believe Ten Years had the longest, smokiest finish. That didn't surprise me considering the phenol difference. Very dry oak, likely from the virgin casks, led to clove, chocolate, pear, and finally malt.
Bottle, Bar, or Bust:  Just as 11.1 and 11.3 were eye-opening for their balance despite the peat, Ten Years didn't disappoint. Unlike 11.1 and 11.3, I prepared myself for the blast and didn't let my brain get ahead of my palate.
Similar to the other releases, I have no idea what MSRP is on this. But, I've seen Octomore 10.x on the shelf at stores and the prices were in the low-to-mid $100s range.  But, Ten Years wasn't part of the 10.x series (because it would have been an x.4 year). Being twice as old and less available, I'd safely assume higher.
You absolutely, positively have to be a fan of peat if you're even going to consider any Octomore release. It is not a starting point.
I do enjoy peated whiskies and I appreciated everything Octomore Ten Years had to offer. Without knowing the price, I'm giving this one a Bottle rating.
So, what's my final verdict on the Octomore series?  They're all bodacious, but I rate them in order as 11.1, Ten Years, and 11.3. Cheers!
My Simple, Easy-to-Understand Rating System: 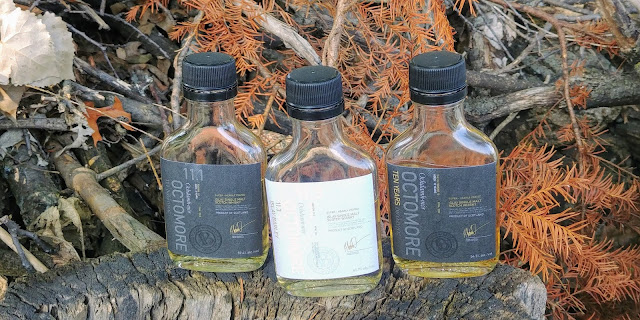 Posted by Whiskeyfellow at 7:03 AM