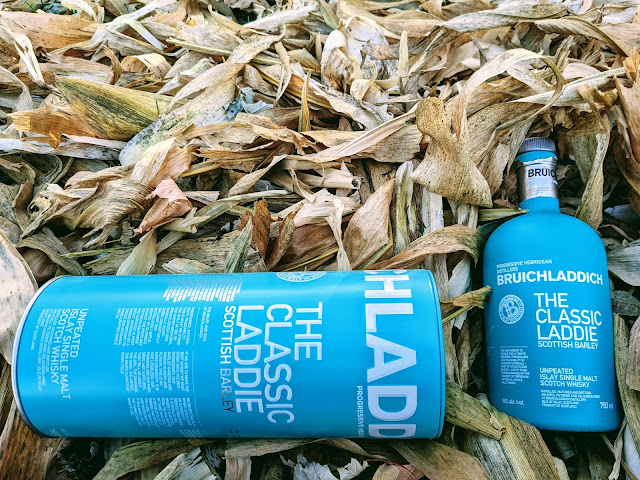 One of the things I respect is transparency. I'm as transparent as possible with my reviews. When a distillery matches that level of transparency, I'm impressed.  Good, bad, or ugly, there is something to be said about not holding anything back.

Back in July, I reviewed The Classic Laddie from Bruichladdich. That batch was 14/009, which means it was the ninth batch bottled in 2014.  I enjoyed it immensely and awarded it my Bottle rating.

The Classic Laddie is an unpeated Islay Scotch. Yes, unpeated whisky from Islay does exist!  This flagship Scotch is meant to compete with Highland and Speyside malts. Every batch of The Classic Laddie is different. Unlike many distilleries, Bruichladdich isn't going for batch-to-batch consistency. Instead, Head Distiller Adam Hannett's goal is to have The Classic Laddie be light, floral, fruity, and unpeated.

Bruichladdich is about as transparent as a distillery can be about any aspect, including divulging what's inside a batch. As a point of demonstration, if you head to The Classic Laddie website, you can enter your batch number to quickly decode it and see everything that was used to create what's in your bottle. A screenshot of that page is shown below.

When you click Reveal, a new page opens.  In this case, I've entered Batch 20/109, which is the batch I'm reviewing today. You can find your Batch Code on the side of the bottle.

I'm not going to screenshot the entire thing, but as you can see, there are 74 casks, 4 vintages, 3 barley types, and 10 cask types.

What you can see is almost anything you'd ever want to know about what's inside.  The only thing Bruichladdich redacts is under the Distillation Year, and that's everything except the youngest vintage. The only reason Bruichladdich redacts that is to remain compliant under regulations of the Scotch Whisky Association (SWA), which is the governing body for the Scotch whisky trade. In the case of Batch 20/109, the youngest vintage is from 2012, making this an eight-year whisky, consisting of:

Before I go any further, as I said earlier, transparency is a big deal for me.  Bruichladdich sent me a bottle of Batch 20/109 in exchange for hosting an online tasting with two non-whiskey influencers:  Saeed "Hawk" of Cocktails by Hawk and Sam of The Frosted Petticoat. The other part of the equation is that Bruichladdich sponsored me beyond providing the bottle to host this guided tasting.

Click here to view the guided tasting (it is the raw footage and runs 47 minutes).  I had a fun time with Sam and Hawk, they learned a lot and I discovered new things from them both. I led them to explore The Classic Laddie, they provided their notes and thoughts. It is well worth the time to watch.  But, if you don't have the time, there is a 10-minute condensed version that I published on IGTV.

What never changes, sponsored or not, is my review and tasting notes. As always, it is my honest assessment of the whiskey, based on my regular Bottle, Bar, or Bust rating system. I felt somewhat safe doing this due to my assessment Batch 14/009.

Appearance:  In my Glencairn glass, The Classic Laddie presented as brassy gold in color. It left a thinnish rim but yielded fat legs that took their time sliding back to the pool of liquid sunshine.

Nose:  Aromas of chocolate and honey started things off. They were followed by orange blossom, pear, and raisin. When I inhaled the vapor through my mouth, I tasted iodine, seaweed, and honey.

Palate:  The mouthfeel was thick and oily, offering no problems coating my entire mouth. Full-bodied, the first flavors were cocoa, honeysuckle, and vanilla. At mid-palate, I tasted dry oak, raisin, and apple. On the back, things got sweet and spicy with cherry, plum, and black pepper.

Finish:  To suggest that this batch of The Classic Laddie has a long-lasting finish would be unfair to long-lasting finishes - it simply would not quit. There was a smoky quality that was absolutely not peat. Another aspect was there was no astringent (band-aid) quality that some folks find to be a turn-off. It was, however, very dry, likely from the influence of the wine casks, with white pepper, clove, and iodine.  Just when I thought things were finally over, raw honey and raisin closed things out.

Bottle, Bar, or Bust:  This is a $56.00 bottle of Scotch that was incredibly complex from the nose to the palate to the finish.  While the mouthfeel never really changed, each time I sipped I pulled out different flavors. That finish was crazy long. With Batch 14/009 I found a slightly astringent flavor but with Batch 20/109, it was non-existent. Forgetting the price, this was very enjoyable. Bring that back into the equation and nothing is holding back a Bottle rating. Cheers!