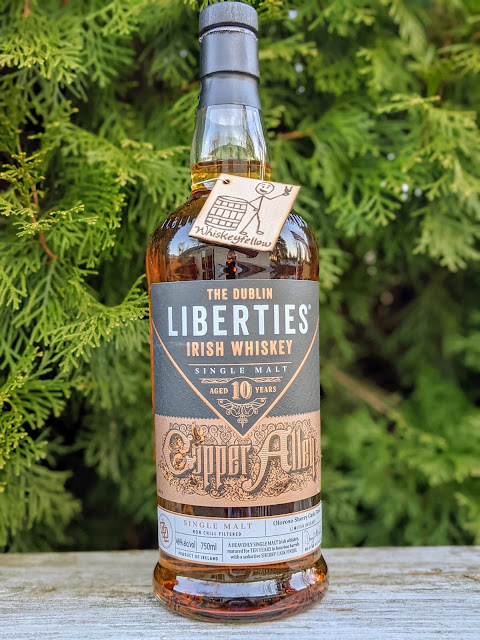 Last month, I reviewed The Dublin Liberties Oak Devil five-year Irish whiskey. It was a blend of malt and grain whiskeys.  I went into detail as to the history behind the distillery.
Today, I'm reviewing their Copper Alley ten-year Single Malt. Copper Alley is named for what the distillery describes as a journey between Heaven and Hell.  The alley was located by the "medieval Christ Church Cathedral in Dublin.  By day, it rang to the cries of hawkers, tradesmen, tanners, and merchants. By night, the pickpockets, cut-throats, tavern-keepers, and brothel-owners plied their busy trade."
Just like Oak Devil, this is sourced from an undisclosed distillery.  Being a single-malt, it is made from a mash of 100% malted barley. It was then aged a decade in ex-Bourbon barrels, then finished for another six months in 30-year old former Oloroso Sherry casks personally selected by Master Distiller Darryl McNally.

"My inspiration for Copper Alley was going back to the original methods of Irish whiskey making. Having rested for 10 years in Bourbon casks, I felt it just needed something extra to really bring it to life. Working with our cask partners, I came across some 30-year-old Sherry casks of exceptional quality which I knew would give the whiskey an edge. This is a one off – there are only 31 casks, so this is a whiskey which will be little repeated." - Darryl McNally

Before I get to the tasting notes, I'd like to thank Quintessential Brands,  the parent company of The Dublin Liberties, for providing me with a sample in exchange for a no-strings-attached, honest review of this whiskey.  Now, it is time to #DrinkCurious.

Appearance:  In my Glencairn glass, Copper Alley appeared as, well, copper. More specifically, it was the color of copper topaz. It provided a fairly thin rim with fatter, fast legs that dropped back to the pool of liquid sunshine.

Nose:  If you could stuff a bunch of fruit in a grenade, pull the pin, and stick it in a glass, you'll get the nose of what this whiskey has to offer. Prune, raisin, and pineapple were easy to pick out. Underneath that were molasses and nuts.  When I inhaled the vapor through my lips, pear and thick vanilla rolled across my tongue.

Palate:  The mouthfeel was full-bodied and extremely creamy. It coated everywhere. Dried cherry, raisin, orange peel, and peach smacked the front of my palate. At the middle, I tasted dark chocolate, toffee, and malt. The back yielded flavors of dry oak, cinnamon, mint, and ginger.

Finish: The finish began with a nuclear explosion of sherry. I chose that descriptor because it was incredibly long and fruity. The fallout was spicy, with ginger, oak, and white pepper. As the spices faded, it became nutty before completely ending.

Bottle, Bar, or Bust:  Copper Alley had the right amount of sweet and spicy. This is atypical of Irish whiskey, a category I already enjoy, and Copper Alley shined a whole new light on it.  For a decade-old, higher-proofed whiskey, it is priced competitively and I believe this is one you'll happily drink. I'm a fan, and I'm slapping my Bottle rating on it. Cheers!

Posted by Whiskeyfellow at 6:24 AM