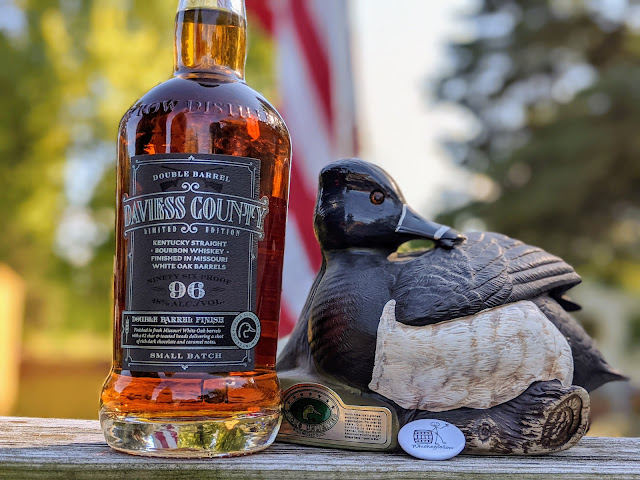 About a year and a half ago, the world was introduced to Daviess County Bourbon. It was a defunct brand revived by Lux Row Distillers. Daviess County Distilling was one of the original Kentucky distilleries.
The story of Joseph Hamilton Daveiss, for whom the brand is named, is rather colorful. He became a lawyer in 1795 and appeared in court as someone you'd think of from the movie Deliverance. He got involved in a duel in 1799 and wound up becoming a fugitive. And, yet, he was also the first lawyer west of the Appalachian Mountains to litigate a case before the US Supreme Court.
Daveiss then became a US District Attorney based in Kentucky. He wound up getting a burr (pun intended) under his saddle regarding Aaron Burr. He tried many times to prosecute Burr for treason but was never successful.
In 1811, Daveiss volunteered to serve in the Indiana militia, where he was placed in charge of the entire Indiana calvary as well as two companies of dragoons. He led them into battle at Tippecanoe, where he died from his injuries.
Fast-forward to modern times, and the Daviess County Bourbon line was a family of three:  the Original expression, the French Oak, and the Cabernet Sauvignon. That is, until now. That's because there's a whole new, limited-release called Double Barrel Ducks Unlimited Edition.
What makes this one different?  It is the original expression, which is a blend of a wheated Bourbon and traditional Bourbon, then aged four years. The exact mashbills are undisclosed, but I suspect they're sourced from Heaven Hill. Once dumped, it was then finished in Missouri white oak barrels, which were subjected to a #2 char level and toasted heads.

"The double-barrel finishing process that goes into Daviess County Double Barrel Bourbon is a perfect nod to our Ducks Unlimited partnership and brings a unique flavor profile to our latest Daviess County offering. Expect a nose that includes crips, toasted-oak notes, caramel and vanilla; sweet caramel, honey and toasted marshmallow flavors on the palate, and a finish of caramelized sugar and lingering dark chocolate compliments of the toasted head finish." - John Rempe, Master Distiller

Packaged at 96°, you can expect to pay about $49.99 for a 750ml bottle. As a comparison, the Original expression was $39.99 and the two prior-finished were $44.99. As such, the $49.99 isn't out of line, and presumably, a portion of the purchase goes to Ducks Unlimited, a wonderful organization.
Without further ado, I'd like to thank Lux Row Distillers for providing me a sample in exchange for a no-strings-attached, honest review. Time to #DrinkCurious and see what's new here...
Appearance:  Poured neat in my Glencairn glass, Double Barrel appeared as a definitive orange amber. A thick rim took shape that collapsed under its weight into a slow curtain drop.

Nose:  I found the aroma to be strong on dark stone fruit, along with nuts and toasted oak. When I pulled the air into my mouth, that stone fruit changed to cherry.

Palate:  Plum and cherry were joined by caramel and dark chocolate on the front. The liquid filled my mouth and coated everywhere with its medium body. At the middle, the sweetness became spicy with cocoa and cinnamon. Those were then eclipsed by toasted marshmallows. The back offered charred oak, clove, and sweet tobacco.

Finish:  The finish on the French Oak expression was long and it wasn't even in the same race as the Double Barrel. Flavors of dark chocolate, caramel, roasted coffee, cinnamon, tobacco, and dry oak remained in my mouth and throat. The caramel came back for an encore. Despite the 96°, my hard palate tingled just a bit.

Bottle, Bar, or Bust:  I thought the original was good, I enjoyed the French Oak, and I loved the Cabernet Sauvignon. The finish on the Double Oak was great, the palate was sweet and spicy in just the right combination. If you asked me which was my favorite expression, it would be a tough call between the Double Barrel and the Cabernet Sauvignon, with me leaning more toward the latter. Regardless, the $5.00 difference in price is not a deal-breaker, especially since I (again) suspect Ducks Unlimited would get a cut. If you see it, buy a Bottle. I don't believe you'll be disappointed in the least. Cheers!