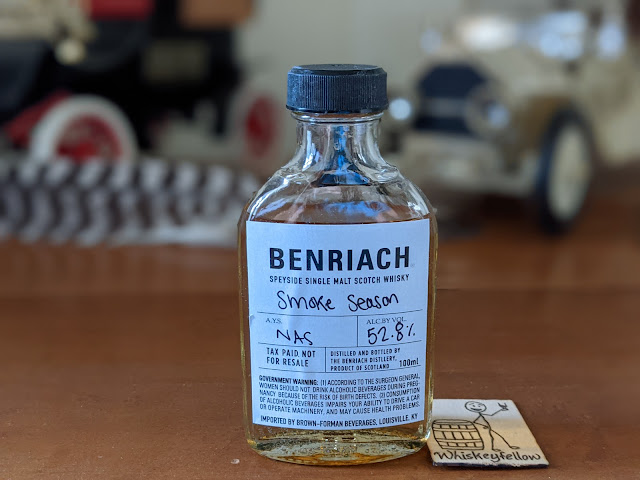 The Speyside region is known for many things, but peated whiskies are the exception to the rule. Those that have this quality tend to be mildly so.

For the last fifty years, The BenRiach has been offering a line of peated Scotches. I’ve reviewed a few of them and found them to be quite tasty. Even the Peated Cask Strength was not overly peated. During the summer, Benriach would send peated malt through the still. For the remainder, it would distill unpeated malt. It calls the period when peated malt is used Smoke Season.

“Smoke Season is a special time of year in the distillery’s calendar, and this new addition gives both the whisky novice and connoisseur the opportunity to discover the uniquely rich, sweet, and smoky character of Benriach single malt, crafted in Speyside, a whisky-making region rarely associated with peated malt. At Benriach, we never stop exploring how fruit, oak barley, and smoke aromatics intertwine and mature in our broad range of eclectic casks.” – Dr. Rachel Barrie, Master Blender

Smoke Season is an intensely-peated single-malt Scotch that carries no age statement. It aged in a small portion of first-fill Bourbon barrels, with the majority in both charred and toasted virgin American oak casks. Bottled at 52.8% ABV (105.6°), this is the first year it has been available in the US market. You can expect to pay about $71.99 for a 750ml package.

I’d like to thank The BenRiach for providing me a sample of Smoke Season in exchange for a no-strings-attached, honest review. The way we make that part happen is to #DrinkCurious.

Appearance: Served neat in my Glencairn glass, Smoke Season presented as a bronze amber. It made an ultra-thin rim on the glass that gave no time whatsoever for the watery legs to crash back to the pool of liquid sunshine.

Nose: There is no mistake that this is a peated whisky!  Burnt oak, caramel, vanilla, toffee, and citrus provided a well-balanced aroma that would drive any Islay fan bonkers. When I drew the air into my mouth, vanilla and toasted oak caressed my tongue.

Palate:  The mouthfeel was slick and oily, coating every nook and cranny of my mouth. The front featured a Crème Brulee that was subjected a bit too long to the flame and cinnamon. At mid-palate, I tasted pear, caramel apple, and orange peel. The back suggested charred oak, black pepper, and dark chocolate.

Finish:  The smoky finish offered no astringent quality. It consisted of charred oak and barbeque smoke. Poking through those heavy notes was a vanilla blast. The whole thing lasted several minutes.

Bottle, Bar, or Bust:  I’m a big fan of Islay Scotches, and while this one was out of the Speyside region, I’d put this one up against many of them. If you blindfolded one such enthusiast, it would not shock me if they guessed this was something out of Port Charlotte. Sure, it doesn’t have an age statement, but who cares? I loved this. You will, too. Buy one, because this takes a Bottle rating. Cheers!

Posted by Whiskeyfellow at 5:43 PM