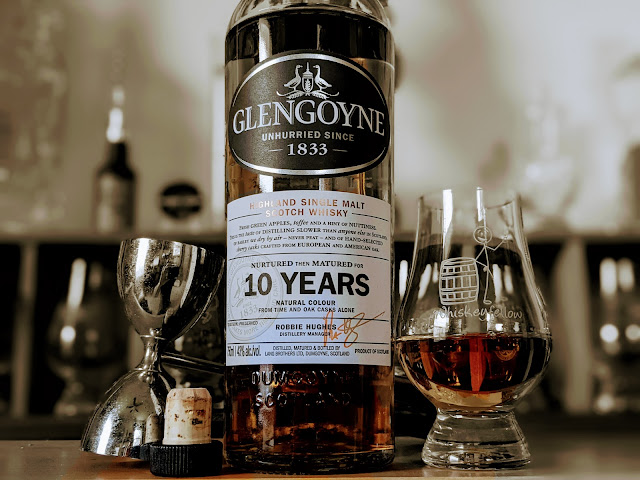 There are only a handful of distilleries out there that can claim to be truly unique. I’m not talking about the whisky; my point is the distillery itself. When discussing Scotch whisky, an inarguably different distillery is Glengoyne.

Founded in 1833 in Dumgoyne, the distillery is a divided one. Half of it, where the stills are located, is in Scotland’s Highland region. On the other hand, the warehouses are located in the Lowland region. The Highland Line, the border that divides the two, runs right through this distillery!

Forgetting geographical uniqueness, something special exists with its distillation process. Glengoyne is known for having the slowest stills in all of Scotland. Fermentation takes roughly 56 hours, and the stills keep the distillate in contact with copper longer with its boil bulbs. The distillery is one of a couple that still uses Golden Promise barley, a strain that is more difficult to grow, offers a small yield, yet is revered for its quality.

Another aspect is that Glengoyne uses no peat in its malting process. In the Highland region, even distilleries that don’t use peat to dry the barley have some minuscule amount of peat from the air, but Glengoyne’s ppm is at zero.

Glengoyne has run continuously since its opening. George Connell first owned it under the name Burnfoot Distillery, then sold it to the MacLelland family, who, in 1876, sold it to Lang Brothers. The Langs held it for 90 years, renamed the distillery Glengoyne in 1905, and later sold it to what is now Edrington Group. Edrington considered Glengoyne to be excess to its needs and, in 2003, Ian Macleod purchased it and has owned it ever since.

Glengoyne’s flagship expression is Glengoyne 10. Because of where the stills are located, it is considered a Highland Single Malt, made from that Golden Promise barley and aged at least a decade in a combination of former Bourbon barrels and European Sherry butts. The whisky is non-chill filtered, naturally colored, and packaged at 43% ABV (86°). I picked up my 750ml bottle for $37.99.

Did I do well with my purchase? The only way to know for sure is to #DrinkCurious.

Appearance:  Poured neat in my Glencairn glass, this Scotch was brassy gold. A medium-thick rim almost refused to give up anything, finally releasing slow, fat droplets that glued to the wall.

Nose: An aroma of apple cider flowed freely before I could even get the glass to my face. Raisin, apricot, honey, and almond were dead giveaways to the sherry cask influence. When I inhaled through my lips, the honey continued across my tongue.

Palate: A creamy, medium-bodied mouthfeel started things off. There was nothing that anyone could describe as “hot” about it. Apple, apricot, and honey were on the front, while cocoa powder and almonds formed the middle. The back consisted of oak, nutmeg, and dry hay.

Bottle, Bar, or Bust:  There are summer days when I want to sit on my back deck and drink something light and refreshing. Glengoyne 10 is perfect for that occasion. Sans the peat-craver, there’s something here for any Scotch-lover: lots of fruity goodness, significant sherry influence, a touch of spice, a lovely texture, and even those who are price-conscious in this economy yet demand a quality pour. If you’ve not yet figured it out, Glengoyne 10 grabs my coveted Bottle rating and runs away with it. Cheers!