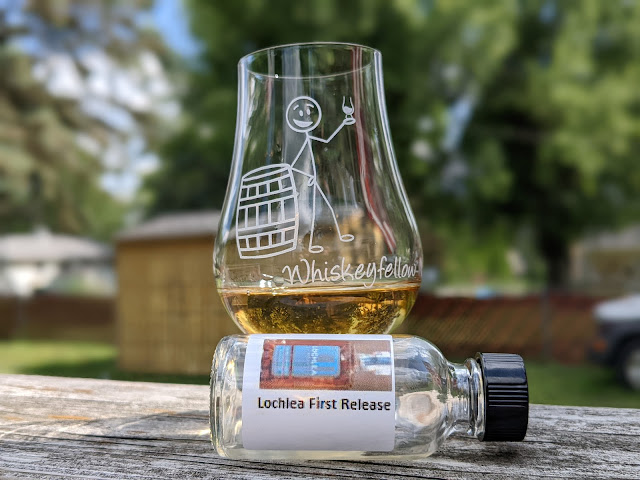 One of the newest distilleries in Scotland is located in Ayrshire. It was a former piggery, cattle barn, and a middery. I bet you’re wondering what a middery is. I had to look up the word. In nice terms, it is an agricultural refuse heap.

Mr. Robert Burns lived on this land for a decade, giving this distillery the unique ability to make that claim. Burns was tilling barley just as has been done for generations before and since. The land was purchased, repurposed, and a distillery was operational in 2018. They called it Lochlea Distillery.

“Initially led by the experience and expertise of distillery manager Malcolm Rennie, and now under the management of ex-Laphroaig Distillery Manager John Campbell. Having built up one of the top ten Scotch brands in the world over the past 27 years, John brings a wealth of knowledge and a burning ambition to help Lochlea fulfil its potential.” – Lochlea Distilling Co.

This Lowland distillery grows its own barley; now, those first bottles of Scotch whisky have hit the market. The inaugural bottling is called, aptly enough, First Release. It is a single malt Scotch that’s non-chill filtered, naturally colored, and aged in first-fill Maker's Mark Bourbon barrels and Pedro Ximénez sherry casks for an undisclosed period (but math and Scottish law tell us it is between three and four years), and bottled at 46% ABV (92°). The suggested retail price is $69.99 for a 700ml package.

As this is the first liquid from this distillery, I have no idea what to expect. But, I typically love PX-cask Scotches. Let’s see (or taste) what they’ve done and #DrinkCurious. But, before I do, I want to thank Impex Beverages, the exclusive USA importer for Lochlea, for a sample of First Release in exchange for a no-strings-attached, honest review.

Appearance:  Poured neat in my Glencairn glass, First Release presented as liquid gold. A bold rim glued itself to the wall, finally releasing long, wavy legs back to the pool.

Nose: Aromas of malt, brown sugar, apple, pear, citrus, nutmeg, and vanilla teased my nostrils. As I drew the air past my lips, my mouth experienced an explosion of thick, rich chocolate.

Palate: The texture was buttery, yet this whisky was not shy about announcing its proof. The tip of my tongue tingled. On a second sip, I tasted baked apple, cinnamon, and raisin on the front. Hazelnut, brown sugar, and orange peel formed the middle, while the back offered cocoa, oak, and clove flavors.

Bottle, Bar, or Bust:  Putting out an initial release of something non-sourced is risky. I’ve had several that did not turn out well. They tend to taste young. They’re typically overly-diluted to hide that young taste (and stretch profits). First Release is nothing like those whiskies. There was plenty of character, with both the Bourbon and sherry wood influences easily discernable. I loved the fruity spiciness (or was it spicy fruitiness?), and it is a well-crafted Scotch worth acquiring. Lochlea snags its first Bottle rating with First Release. Cheers!