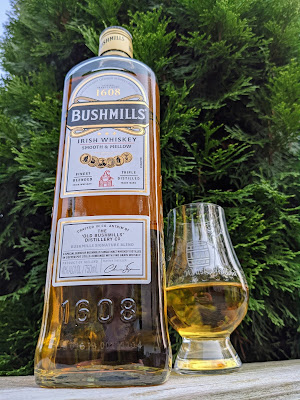 What can you say about a brand's flagship whiskey?  Come on, I'm a reviewer... I can say plenty! Today I'm sipping Bushmills "The Original" White Label Irish Whiskey.  I've reviewed Bushmills before, it was Red Bush, and you can peruse that review if you're interested.

Old Bushmills Distillery has been distilling since 1608, making it the oldest licensed distillery worldwide. It hasn't been a continuous run - it was shuttered and reopened a few times, and back in 1885, the distillery was pretty much destroyed by fire. But they rebuilt and resumed operations and even survived Prohibition, a feat most other Irish distilleries failed to overcome.
Bushmills has also changed hands several times. Founded by an Irish adventurer named Thomas Phillips, it didn't officially become Bushmills until 1784, when it was purchased by Hugh Anderson. It changed hands a few times, and then, in 1972, it was taken over by Irish Distillers, the holding company that controlled all Irish whiskey production. Then, in 1988, Pernod-Ricard took possession, sold it to Diageo in 2005, and traded it off to Jose Cuervo, its current owner, in 2014.
Bushmills White is triple distilled, like most Irish whiskey, and is a blend of malts and grains.  This is one where the age statement keeps changing.  In recent years, it carried no age statement, then the one I'm reviewing is three years, and according to its website, that's now been bumped up to five, which may explain why I snagged my bottle at the rock-bottom price of $16.00 (it retails typically about $25.00).  It weighs in at 40% ABV (or 80° for those of us who, like me, are stuck in an empirical world). For the record, Bushmill's White is one of the best-selling Irish whiskeys on the planet.
That last statement doesn't mean much to me. The best-selling American whiskey in the world is one I'm not a fan of. Same with the best-selling Scotch. There's a vast chasm between "best-selling" and "best tasting." I care about the latter.
So, how does The Original hold up? The only way to know for sure is to #DrinkCurious.  Let's get to it.
Appearance:  Poured neat in my Glencairn glass, this Irish whiskey presents as a bright gold. It left a medium-thick rim on the wall, and fat droplets fell back into the pool of liquid sunshine.
Nose: There was a blast of pineapple that almost overwhelmed my nostrils. I enjoy pineapple, so that was cool. Also in attendance was a strong malt fragrance with honey and green apple. When I inhaled through my lips, I tasted green apple and vanilla.
Palate:  The mouthfeel started off thin, but subsequent sips became more the viscosity of water. Green apple kicked things off, followed by pineapple and malt.  Yeah, I know, that is darned close to the nose. Come mid-palate, a blend of honey and vanilla rounded out all the aromas.  It wasn't until the back, when I tasted ethanol and black pepper, that something new appeared.
Finish:  A medium finish of oak and barrel char was all that I found. Well, that and some unexpected alcohol burn. But there wasn't much else to savor at the end.
Bottle, Bar, or Bust:  This is a $25.00 bottle.  You don't expect much from that, and Bushmills delivers on that expectation. This is a disappointing Irish whiskey that should be pretty hard to screw up in theory. When I went on the Bushmills website, even the distillery suggests it is a mixer.

With a recipe that dates back before Prohibition, there is no better whiskey for making a classic, pre-Prohibition cocktail than Bushmills Original. Combining our pure single malt whiskey and a lighter grain whiskey, you’ll notice its rich, smooth, warming taste almost instantly, just as generations have done before.

I don't buy whiskeys to be mixers; I drink them all neat. As much as I hate to do it, I will toss a Bust rating at this. If I had $25.00 to spend and I wanted an Irish whiskey, check out my review of Slane, which costs the same yet I believe is superior.  Cheers!
My Simple, Easy-to-Understand Rating System
Whiskeyfellow encourages you to enjoy your whiskey as you see fit but begs you do so responsibly.
Posted by Whiskeyfellow at 12:00 AM