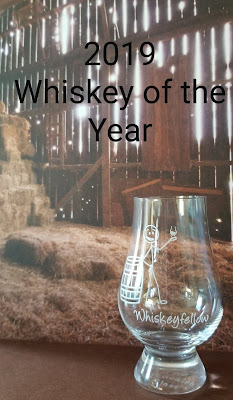 It seems like everyone and their brother hands out whiskey awards. While I'm no exception to this rule, the Whiskeyfellow Awards are different from any other list. Before you roll your eyes and say, "Whatever," let me explain. My list is geared toward the average whiskey drinker.


I don't put out my list in October. Why?  Because this is a list of the Best Whiskeys of 2019, and there exists something called November and December. Except for the need to be first with a list, I really don't understand the need to rush the release.

To even contend for an award, it has to be something that's actually crossed my palate. I don't have a team of interns who vet everything for me and then present me with their best of what they've tasted. If you're following me because you agree with my palate, then it is my palate on the line, not some intern's palate.


Because my demographic is the average whiskey drinker, here's what you won't find on my list:


In my opinion, for one of these Best Of lists to be worth anything is when it contains things you can actually buy for yourself and enjoy.  Otherwise, what's the point other than to post a Ha Ha! Look What I Have! Sucks To Be You! article?


Unfortunately, due to our silly, fractured distribution system, I cannot guarantee that everything on my list is available in your market. But, everything on this list is on the market and reasonably available, even if it means having to travel to another state (meaning, when you get there, it isn't magically gone).


Finally, I'm not hitting every possible whiskey category. If you don't see something in the category you're looking for, it means I either didn't drink anything in that category that comes to mind or if I did, it wasn't worthy of a Best Of award.  So, without further ado, here we go.

Lux Row's Double Barrel Bourbon may be the most difficult one to obtain, as you'll have to travel to Kentucky to get it.  It is also the most expensive. But, this one is going to be around for at least the near future, so if you head there in the next several months, you should be able to pick up a bottle. Lux Row told me it is at the distillery and at least one other retail outlet.

While this is the most expensive whiskey on my Best Of list, it is worth every penny you'll pay. The distillate is likely Heaven Hill's, but it is unlike anything they've put out before, which is how it made my best Bourbon of the year. I reviewed Lux Row Double Barrel Bourbon in October. 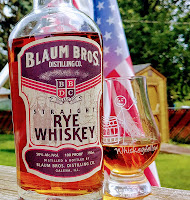 Mike and Matt Blaum are known for their Knotter whiskeys. Knotter is a play on words (sound it out). They picked some great barrels from MGP.  But, that was while they were waiting on their own distillate to mature. In July, they released their four-year Straight Rye Whiskey.

I had their four-year Straight Bourbon released in May, and after enjoying it, I was admittedly looking forward to the Rye. As you can read in my review, this one had a finish that was very eye-opening, and that's what solidified its spot as my best Rye. It is also the most affordable whiskey on this year's Best Of list.

This category was very difficult. I've had some lovely Scotches this year and, until November, I thought I had my winner figured out. But, then a friend gave me an opportunity to try Bunnahabhain Toiteach, and this one made the other contenders take a back seat.

This one is a peated Scotch, and if you're not a fan of peat, this one may be the one to change your mind, as the peat is not front and center. And, moreover, in the land of very good Scotch, this one is easy on the wallet. You can read my review to read more about it.

I didn't get to try a ton of Irish whiskeys this year, but the ones I did have been excellent - I don't believe I had anything under a Bottle recommendation all year.  The shining star was easily Powers John's Lane, which I first tasted in November and, because of my lack of preparedness, had to sample again in order to pen a review.

This one grabs your attention from the start with a wonderfully complicated nose and somehow getting an entire orchard of fruits in your mouth. You can learn more from my December review to read more about why this was so good.

This year I tried some very interesting whiskeys from around the world:  Europe, Australia, Africa, India, South America, and Japan.  I considered splitting "World Whiskey" into separate categories but some of it was very difficult to obtain, very expensive, or you'd have to buy from an overseas retailer.

Fukano Whisky Vault Reserve #1 was so interesting that it became a stand-out from the others. And, again, when the price comes into the picture, it became even more attractive.  This one's distilled from white rice, and you can read my review from November to learn more about it.


Now that you've seen my best in each category, it is time to crown this year's best of the best. Choosing my favorite was not easy. I danced between three of the category winners several times before making my final decision. The winning whiskey comes from distillers who pawn themselves off as just two guys making whiskey with no prior experience, they've managed to take a very serious attitude toward distilling something that isn't a me-too product and is very special.

Congratulations to the Blaum Bros. Distillery Co. for the most unique American Rye I've ever tried. That smoked malt put this one over the top and earned the Whiskeyfellow 2019 Whiskey of the Year Award. Cheers!
Posted by Whiskeyfellow at 8:50 AM