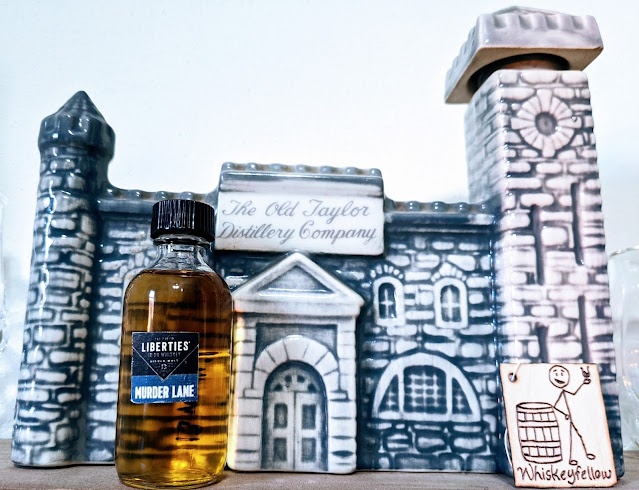 "Named after an unmarked alley between Bow Street and James Street in Dublin, it is said that people who went down that lane never came back. There was an archway with an oak devil hung above it, and it was seen as a place of no return." - The Dublin Liberties Distillery

I've been having some fun with The Dublin Liberties Distillery. This will be my third review of its whiskeys - the first being Oak Devil and the second Copper Alley. I don't talk much about marketing because, for the most part, it is fluff. But, in the case of The Dublin Liberties, these backstories are fascinating and spooky.  Overall, it has no effect on my tasting notes or recommendation, but it sure beats, "My grandpappy's grandpappy was a distiller of yore and we found his secret recipe on the back of a child's painting discovered in the attic of a neighbor at an estate sale."

Today's review is of Murder Lane, a 13-year Single Malt that was first aged in ex-Bourbon barrels, then finished for an undisclosed period in former Hungarian Tokaji wine casks. I'm a whiskey guy. While Mrs. Whiskeyfellow is a cork dork, I've never heard her mention Hungarian Tokaji, and as such, I was curious and looked it up:

"Tokaji is the name used to describe wine from the Tokaj region in northeastern Hungary. Though dry wine is made here, the region’s most famous wines are lusciously sweet, and this is what most people refer to when they use the name Tokaji. The sweet wines of Tokaji are some of the world’s greatest." - Wine Enthusiast

Like everything from The Dublin Liberties, this one is sourced from an undisclosed distillery. It is bottled at 46% ABV (92°) and there were 1278 bottles in the batch. Expect to pay at least $120.00 for a 750ml. That's getting into super-premium pricing for Irish whiskey.

I'd like to thank Quintessential Brands, the parent company of The Dublin Liberties, for providing me a sample of Murder Lane in exchange for a no-strings-attached, honest review.  Now, let's #DrinkCurious!

Appearance:  In my Glencairn glass, Murder Lane appeared as a golden amber. It created a thick rim that led to fat, sticky droplets that glued to the wall. They eventually fell back to the pool, but it took a bit.

Nose:  The lusciously sweet note that Wine Enthusiast suggested was appropriate. Aromas of pineapple, Honeycrisp apple, green grape, vanilla, and Whopper candies. As I breathed the vapor in my mouth, it was like eating pineapple.

Palate:  The mouthfeel was oily and offered a medium body. On the front, I tasted milk chocolate, honey, and toasted coconut. As the liquid moved mid-palate, citrus flavors of orange and lemon danced in tandem, then was joined by apricot. On the back, the sweetness continued with butterscotch, but that then morphed to clove and cinnamon.

Finish:  Where's the wood?  It waited until the finish to appear!  A strong presence of semi-dry oak married with cracked pepper. The spice was long-lasting, but it started dropping off with tobacco leaf, then full-monty sweet with peach before finally fading out.

Bottle, Bar, or Bust: I don't know who is doing the actual distilling for The Dublin Liberties but I wish I did. I've been impressed with what they're packaging, and Murder Lane is no exception. I'm also damned intrigued about Hungarian Tokaji and want to grab a taste (and that speaks volumes, I'm not really a wine guy). I loved what I drank, and I have nothing to criticize except the cost. At $120.00, I could be persuaded to buy it. But, I've also seen it at $180.00, and Murder Lane just isn't worth that. Take price out of the equation, and this one of the easiest Bottle ratings I'd offer. Factor it back in, and this is a Bar. Find a good whiskey bar and try this one first. I'm sure you'll love it, and you can decide for yourself if you're willing to shell out the dough. Cheers!