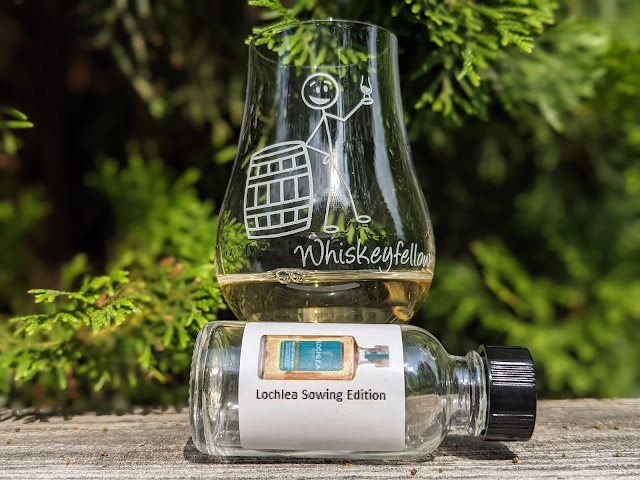 Last week, I spoke of (and reviewed) Lochlea Distillery’s inaugural whisky, First Release. I was impressed with how good it was, especially considering the risk Lochlea took with releasing its own distillate and not sourcing as many others do. First Release was a single malt using both first-fill Bourbon and PX-sherry casks.

The next project is called Sowing Edition. Sowing Edition is a springtime release, soon to be followed by Harvest Season (Summer), Fallow Edition (Fall), and Ploughing Edition (Winter). The goal is to feature the effects of different farming seasons to whisky drinkers.

“Sowing Edition is a perfect springtime whisky with green apple skins, pear drops and custard creams on the nose; vanilla sweetness, orchard fruits and hazelnuts on the palette with a final fruity sweetness lasting to the finish. Made from barley grown within sight of the distillery, Lochlea Whisky is an Ayrshire dram through and through.” – John Campbell, Master Blender and Distillery Manager, Lochlea Distillery

Sowing Edition is a single malt aged for an undisclosed period in first-fill Maker’s Mark Bourbon barrels. While there is no age statement, Scottish regulations indicate a whisky must be aged at least three years to qualify as Scotch, and the distillery made its first distillate in 2018. As such, we know it is between three and four years.

I must take a moment and thank Impex Beverages, the exclusive USA importer for Lochlea, for a sample of Sowing Season in exchange for a no-strings-attached, honest review. Now it is time to #DrinkCurious and learn more.

Appearance: Poured neat into my Glencairn glass, Sowing Edition was the color of straw. A medium rim formed sticky droplets that clung to the wall.

Nose: The green apple that John Campbell mentioned is unmistakable. It raced to my nostrils. A dash of cinnamon paired nicely, followed by vanilla and toasted oak. Only the apple came through when I drew the air through my lips.

Palate:  A thin, oily mouthfeel offered even more green apple with pear and nutmeg on the front. The middle consisted of oatmeal, hazelnut, and mocha, and I tasted vanilla, toasted oak, and cinnamon spice on the back.

Finish: Long-lasting and slightly tannic, the finish offered cinnamon, clove, toasted oak, a touch of oatmeal, and a blast of vanilla.

Bottle, Bar, or Bust:  Lowland Scotches aren’t known for bold flavors. And, yet, Lochlea defies that. Both Sowing Edtion and First Release featured those. Not only do I respect Lochlea for releasing its own distillate, but I was also pleased by what I was sipping. Lochlea has something special going on, and I’m happy to tip my hat and crown Sowing Edition with my Bottle rating. Cheers!