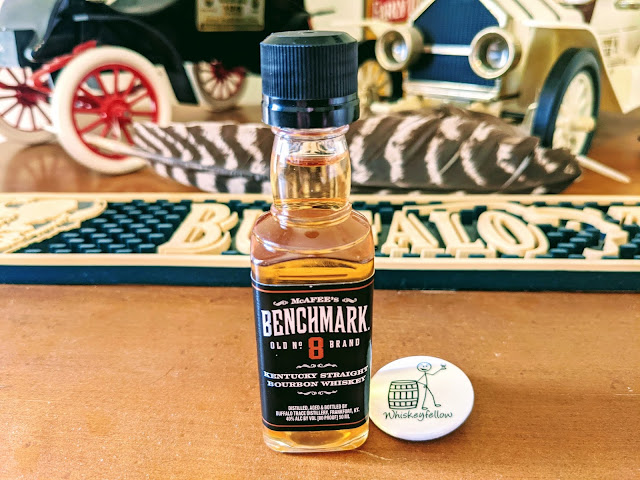 Benchmark's history is fascinating. It began with Seagram's in the 1960s as a luxury Bourbon brand. It was distilled and aged at Four Roses back when Seagram's owned it. Before Four Roses was sold off, Benchmark was acquired by Sazerac (the parent company of Buffalo Trace) in 1992. Sazerac also tacked on McAfee's to the branding to pay homage to the McAfee brothers.

"Named after the McAfee brothers who surveyed a site just north of Frankfort in the late 1700s, this rye recipe bourbon is yet another label that honors the storied history of the Distillery and the land it sits on." - Sazerac

This is a dirt-cheap whiskey that carries a 3-year age statement. It is bottled at 40% ABV (80°), and if you want a 750ml or even a 1L, you can expect to pay around $15.00 for it.
I picked up a shooter on one of my various liquor store runs for about $0.99. I couldn't even get a soda for that price, so I considered it a wise investment no matter the outcome. Plus, I'm always on the prowl for something that makes me #RespectTheBottomShelf. Let's see if that happens while I #DrinkCurious.

Appearance:  Served neat in my Glencairn glass, Benchmark was the color of golden straw. It formed a medium rim that gave way to fat, medium-weight droplets that fell back into the pool.

Palate:  The mouthfeel was extremely thin. The front featured corn and vanilla. The middle was almond and light caramel. Feint oak and bubblegum were on the back.

Finish:  Short-to-medium in length, the finish consisted of corn, nuts, allspice, and bubblegum.

Bottle, Bar, or Bust:  This is a tough one. There's nothing remotely offensive about Benchmark, but at the same time, there's nothing memorable, either. Was I to introduce someone to the world of Bourbon, and they feared burning or being too strong, this would be a perfect toe-dipping opportunity.

I hear all the time from folks that something they're not a big fan of would be a "good mixer." I don't believe in good mixers. Oh, I know they exist, and sometimes you're stuck staving off buyer's remorse that way, but I don't recommend whiskey thinking of its mixing potential. Every whiskey I try is poured neat and perhaps a drop or two of water if I'm curious what that may do. They're all judged on that basis.

You could use Benchmark Old No. 8 as a mixer. It could also be a Bourbon to drink on a hot summer's day when you want something light. And, if that's your goal, this would be a Bottle rating. However, for me, this is far too muted. This isn't a Bust by any means, but unless you can find a 50ml sample bottle at the store, you'll want to try it at a Bar first.  That's my rating; cheers!