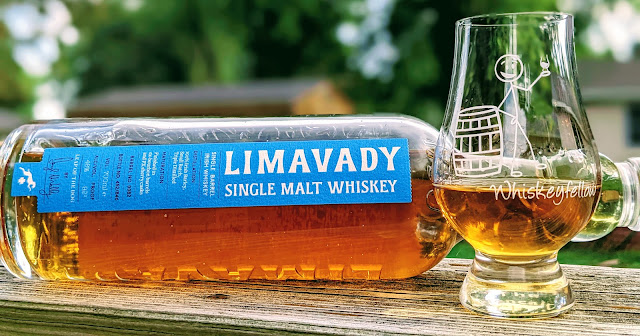 In ye olde 1750, alongside the River Roe in County Londonderry, Ireland, John Alexander began making whiskey on his family farm and called his distillery Limavady. Limavady remained in business in one form or another, including adding a brewery, until it was shuttered in 1915 when Distiller’s Finance Corporation (DFC) acquired several Irish distilleries and killed them off.

Then, 260-something years later, Darryl McNally, a well-respected veteran of the distilling industry under Bushmills and The Dublin Liberties, traced his family tree and discovered he was related to the Alexanders who began the distillery.

“Limavady kept calling, so I said, let’s grab this with both hands. My brother—who was also a distiller at Bushmills—left as well to come into the family Limavady.” – Darryl McNally

But McNally didn’t want to simply do another me-too whiskey, especially since he had to source barrels. He planned on offering Irish single malt whiskey but took things a step further. He concentrated on single barrel, single malt whiskeys. While the single-barrel idea isn’t unheard of in Ireland, it is unusual.

You know me; unusual is something that always grabs my full attention!

While Limavady doesn’t disclose who distilled its whiskey, we know it is made from 100% malted and unmalted Irish barley that’s been triple-distilled in copper pot stills, then aged in ex-Bourbon barrels for about four and a half years. At that point, McNally selects his barrels of whiskey.

Next, the matured whiskey is dumped and finished in former Pedro Ximénez (PX) sherry casks, giving it a chance to pull fruity notes from the wood. Those PX casks are lovingly referred to as Darryl’s Barrels.
Sourcing barrels of whiskey won’t last forever; McNally has a distillery planned so he can make everything in-house and bring distilling back to its historical roots.
Packaged at 46% ABV (92°), it carries a suggested retail price of $49.99.
Each bottle is labeled with the barrel number and bottle number. In the case of the sample that was provided to me, it is Barrel 0082, Bottle 452 of 846. And, speaking of the bottle, the brand didn’t spare any expense. It is an attractive, embossed bottle with Limavady printed lengthwise along the side, 1750 above the label, and has a bulbous neck with a glass stopper.
The bottling process and distribution are performed by WhistlePig, which has partnered with McNally. That allows McNally to concentrate on his whiskey without the hassles of logistics.
Now that we know the backstory, the only thing left is to #DrinkCurious. But, before I do, I thank WhistlePig for providing me a sample in exchange for a no-strings-attached, honest review. Let’s get to it!

Appearance: A neat pour in my Glencairn glass revealed a whiskey the color of bronze. A thick, heavy rim yielded sticky tears that slowly crawled back to the pool.

Nose: The journey began with an evident PX influence, with strawberry, apple, pear, and honey, followed by malt and buttery toffee from the Bourbon. When I inhaled through my mouth, honey and pear rolled across my tongue.

Palate: Thick and viscous, the whiskey imparted flavors of raw honey, stewed apple, and peach on the front of my palate. The middle consisted of malted barley, grass, and caramel, while the back featured cinnamon, oak, and graham crackers.

Finish: Cinnamon spice and oak tannins dominated the beginning, then syrupy honey seemed glued to my mouth and throat. Stewed peaches and apple pie filling slid by, with the whole shebang remaining for several minutes.

Bottle, Bar, or Bust:  Limavady has a complex nose, an unusually thick mouthfeel, and a spicy, fruity palate. Its long-lasting finish gently warmed my throat, and I caught myself smiling as I analyzed the experience. To offer a 46% ABV single malt at $50.00 ranks this one heck of a bargain, and I can’t think of a single reason why it hasn’t earned my Bottle rating. On a side note, Limavady is one of the better Irish whiskeys I’ve sampled this year. Cheers!