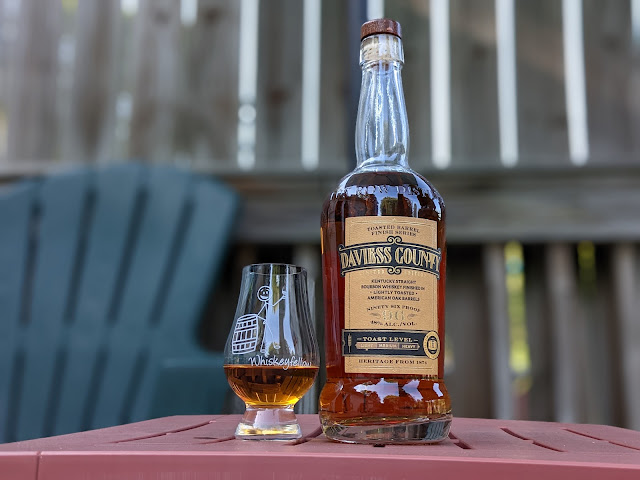 If you’re unfamiliar with Daviess County Bourbon, it is named for Joseph Hamilton Daveiss,  a lawyer who would appear in court as someone from the movie Deliverance. He got involved in a duel in 1799 and became a fugitive.  And, yet, he was also the first lawyer west of the Appalachian Mountains to prosecute a case before the US Supreme Court.

Daveiss then became a US District Attorney based in Kentucky. He wound up getting a burr (pun intended) under his saddle regarding Aaron Burr. He tried many times to prosecute Burr for treason but was never successful.

In 1811, Daveiss volunteered to serve in the Indiana militia, where he was in charge of the entire Indiana calvary as well as two companies of dragoons. He led them into battle at Tippecanoe, where he died from his injuries.

You're probably wondering if I've got a spelling error regarding his name. For whatever reason, anything named after Daveiss has been spelled Daviess, including a county in Kentucky. In that county was a distillery called Daviess County Distilling Co., one of the original Kentucky distilleries.

I’ve tasted and reviewed each of the incarnations of Daviess County Kentucky Straight Bourbon since it was resurrected in 2020 by Lux Row Distillers out of Bardstown. Last year, the brand released a special Ducks Unlimited Bourbon. It was a one-and-done thing. Recently, Daviess County Bourbon announced it was planning an annual toasted-barrel finished limited release, and today I’m reviewing this inaugural whiskey.

Daviess County’s Finished in Lightly Toasted American Oak Barrels is made from its traditional rye and wheated Bourbon mashbills and aged more than four years in new, charred oak barrels. Then, as the name implies, it goes through a finishing process in lightly toasted barrels.

“Finishing our traditional Daviess County bourbon in lightly toasted American oak barrels imparts aromas of caramel, vanilla and hints of oak on the nose, while delivering sweet caramel with notes of vanilla and coconut on the palate. This unique flavor profile is certain to become a fast favorite among fans of this brand.” – John Rempe, Master Distiller at Lux Row Distillers

Lux Row states an allocation of 3,000 six-pack cases of 96° bottles, with a suggested retail price of $49.99. Distribution is nationwide.

How does Davies County Lightly Toasted fare? We’ll have to #DrinkCurious to find out. Before I do, I must thank Lux Row Distillers for providing me a sample of Lightly Toasted in exchange for a no-strings-attached, honest review.

Appearance: The Bourbon featured a deep, orange hue when poured neat in my Glencairn glass. A bold rim left even heavier droplets that stuck to the wall.

Nose:  As I allowed this Bourbon to rest, its aroma filled the room. The promise of vanilla, caramel, and oak was fulfilled; however, those smells were joined by cinnamon, almond, and nutmeg. Inhaling that vapor through my lips let a wave of caramel roll across my tongue.

Palate:  The mouthfeel was oily but weightless. The front of my palate found rich caramel with no effort. And, yet, there was nothing to accompany it. However, the middle offered coconut, macadamia, and cinnamon, while the back had toasted oak, roasted almond, and green peppercorn flavors.

Finish:  The oak’s toastiness morphed to lightly charred on the finish. Shredded coconut, caramel, and roasted almond remained for a medium-long duration.

Bottle, Bar, or Bust:  Daviess County Lightly Toasted is an easy sipper. There’s nothing regarding “burn” despite the 96°, and it could easily be sipped on a warm, summer day which, coincidentally, is when I sampled it. Daviess County is affordable and well worth the investment of a Ulysses S. Grant in a realm of ever-more-expensive limited-edition whiskeys. I believe it has earned its Bottle rating, and I am sure you’ll agree. Cheers!