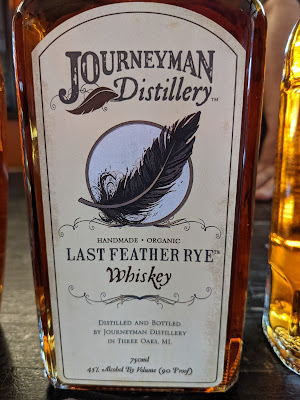 I get a kick out of real backstories. Sure, the marketing stuff is fun, but most of us realize (or we should) that finding some long-forgotten recipe of my grandpappy's grandpappy's sippin' whiskey behind an old cupboard is a curiosity. Journeyman Distillery in Three Oaks, Michigan, doesn't offer a tall tale. But the story is still fun.

Flashback to 1883, and you have a gentleman named E.K. Warren. He built the Buggy Whip and Corsets Factory, which made, not surprisingly, buggy whips and corsets. Warren revolutionized corset production by incorporating featherbone in its construction versus the whalebone that other manufacturers utilized. Suddenly, his corsets gained worldwide notoriety. Interestingly enough, Warren was a serious prohibitionist.

Fast-forward to 2010, and Bill Welter founded a distillery in this same building. He pays homage to its roots, offering whiskeys with names such as Featherbone Bourbon, Corsets, Whips and Whiskey, and Buggy Whip Wheat. Before opening Journeyman, Welter was an apprentice distiller at KOVAL, located in Chicago. KOVAL's claim to fame is one of the first all-organic, kosher distilleries.

Today I'm reviewing Last Feather Rye, made from a mash of 60% organic rye and 40% organic wheat, all locally grown. It is then placed in 30-gallon, new American white oak barrels for an undisclosed amount of time. Certified organic and kosher and packaged at 90°, you can expect to pay about $50.00 for a 750ml bottle.

I sampled a pour of Last Feather Rye at a local watering hole here called The Malt House. Time to #DrinkCurious and discover what this is all about.

Appearance:   Served neat in my Glencairn glass (The Malt House uses rocks glasses, so I brought my own), Last Feather Rye appeared caramel in color. It formed a medium rim and fast, watery legs that fell back into the pool.
Nose:  The first thing I smelled was varnish. That was not a good introduction. But, it was followed by pear, honey, caramel, and sawdust. When I breathed the vapor into my mouth, vanilla made me forget about the varnish.
Palate:  Offering a medium mouthfeel, the front of the palate featured banana bread, mint, and apple. As it moved to the middle, those changed to vanilla and rye spice. Then, on the back, it got spicy with black pepper and cinnamon.
Finish:  Medium in length, flavors of charred oak, banana bread, and rye spice stuck around.
Bottle, Bar, or Bust:  While I enjoy a good backstory, my hopes are always that the whiskey will match. There's not a whole lot to Last Feather Rye; indeed, nothing to stand out and make me take notice. It tasted a bit young, as evidenced by the varnish and sawdust, but carrying no age statement means it is at least four years old. I "get" the whole craft whiskey thing and how there are sunk costs to recover, but $50.00 for this one seems pricey. A Bar rating seems appropriate. Cheers!

My Simple, Easy to Understand Rating System
Whiskeyfellow encourages you to enjoy your whiskey as you see fit but begs you do so responsibly. 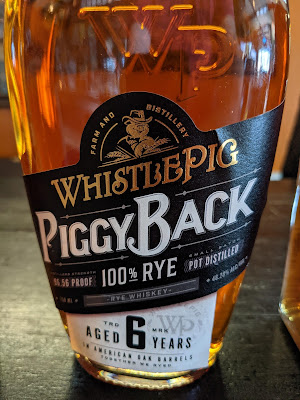 I'm a big fan of Dave Pickerell and had an amazing visit with him here in Wisconsin at one of his last appearances before his untimely death.  If you're unaware, Dave was the mighty force behind WhistlePig as its Master Distiller. He didn't really do the distilling, though. That job belonged to Rick Murphy of Alberta Distillers.
Alberta? Like Canada?  You betcha!  WhistlePig sources its whisky from our northern neighbor, ages it in Vermont, and fully discloses that. WhistlePig does have an operating distillery with a copper pot still designed by Dave.

"WhistlePig began when we purchased our farm in 2007. After a few years of deep consideration and personal reflection we committed ourselves to crafting the world’s finest and most interesting Rye Whiskeys... [We] discovered and purchased an incredible stock of 10-year-old blending Whiskey in Canada that was being profoundly misused. That initial stock, for which we are forever grateful, is what kicked off our grand adventure." - WhistlePig

Today I'm reviewing PiggyBack 6.  As the name suggests, it carries a six-year age statement.  PiggyBack starts with a 100% rye mashbill from Alberta. It is aged in new, charred oak barrels to follow the American Rye whiskey regulations. It is also certified kosher. Bottled at 96.56°, you can expect to pay about $50.00 for a 750ml package.
I acquired my sample at The Malt House, a local bar located in Madison.  That explains the less-than-interesting photo, but the whole #DrinkCurious thing applies nonetheless. Let me get started.
Appearance:  Served neat in my Glencairn glass, PiggyBack presented as pale gold in color. It made a thin rim that created a curtain of legs that crashed back into the pool of liquid sunshine.
Nose:  Aromas of citrus, cinnamon, and caramel were fairly easy to pick out. When I brought the fumes into my mouth, a wave of vanilla flowed over my tongue.
Palate:  With a silky, medium-bodied mouthfeel, the first flavors I tasted included rye spice and cocoa powder. The middle was soft leather, and the back offered oak, vanilla, and white pepper.
Finish:  Medium in length, the oak and white pepper carried through, and vanilla was swapped out with cinnamon spice.
Bottle, Bar, or Bust: As much as I respected (and still do) Dave, as much as I recognize his amazing talent, at the end of the day, PiggyBack is still a nondescript Canadian whisky that has been aged in the United States. If I was at a friend's house and was offered a pour, I'd drink it. But, I don't see myself laying down money for a bottle. Someone newer to Rye whiskey may find this very approachable. Because of that, I'm giving it a Bar rating. Cheers!

My Simple, Easy to Understand Rating System
Whiskeyfellow encourages you to enjoy your whiskey as you see fit but begs you do so responsibly.
Posted by Whiskeyfellow at 6:00 AM No comments: