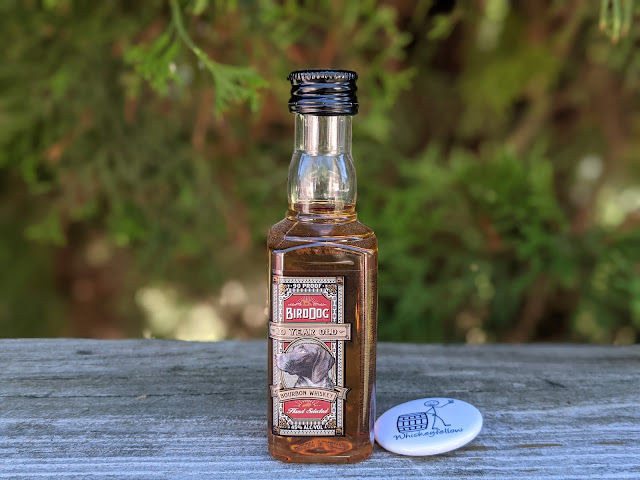 Bird Dog Whiskey. I'm sure you've seen their dozen or so flavored whiskeys on the shelf and wondered if they're any good. But, did you know they have a 10-Year Bourbon available?  I've seen it around, I've tasted it in the past, but each time I did, it was at Distill America and always toward the end of the night, which meant my palate was shot and couldn't be relied upon.

Bird Dog is owned by Western Spirits out of Bowling Green, Kentucky. Western Spirits owns three other whiskey brands:  Calumet Farm, Sam Houston, and Lexington. I have no information on who did their distilling prior to 2017, but that year they entered a joint venture (or contract distilling) agreement with Bardstown Bourbon Company.  Assuming 2017 is when Bardstown Bourbon Company started distilling, that's four years ago, which would mean that this ten-year expression was distilled by someone else.

I couldn't find any information regarding the mashbill, the cooperage, or even the distillery. That information is held close to Western Spirits' vest.  While I prefer transparency, I get it when some distillers hold back on any real information. But, the interesting thing is Bird Dog 10 appears nowhere on its website. I checked out Western Spirits as well. Nada. This could mean it has been discontinued, and for the number of shops that show it "Out of Stock," that's likely the case.

"We craft our award-winning Kentucky bourbon, using the traditional process, with extreme care for quality and consistency. Our bourbon is barrel-aged in small batches - the way bourbon is supposed to be. These Kentucky straight bourbons stand on their own as a premium spirit and provide an irresistibly smooth finish with a depth and complexity perfectly suited for easy sippin’." - Bird Dog Whiskey

So, here's what we do know. It is from somewhere in Kentucky and aged at least ten years in someone's rickhouse before being hand-selected for quality and then blended in an extremely small batch, whatever that means (there is no legal definition of small batch, and an extremely small batch could be one barrel or a few hundred or more). It is packaged at 90° and it will set you back about $56.99.

I picked up a 50ml taster during my recent travels and had a chance to #DrinkCurious. Here we go...

Appearance:  Poured neat in my Glencairn glass, Bird Dog 10 was orange-amber in color. It formed a thick rim and slow, fat legs that crawled to the pool of whiskey.

Nose:  My schnozz picked up oak, sawdust, mint, field corn, and vanilla. When I inhaled through my open mouth, I experienced a strangely bitter lemon zest. Lemon isn't supposed to be bitter. Somehow, this was, and that was off-putting.

Palate:  The mouthfeel was oily and thin. Despite sitting for about 30 minutes before I went to sip it, I was treated to an ethanol blast on the front, married with cinnamon and oak. The middle was musty corn. The back offered flavors of rye spice, cinnamon Red Hots, and dry oak.

Finish: Thankfully, it was short. That's about the nicest thing I can say about it. Cinnamon, cocoa powder and very dry oak sucked whatever moisture might have been in my mouth.

Bottle, Bar, or Bust:  I try very hard not to be cruel. However, at some point, there is a need to stress just how bad something is. While the goal may have been to curate the creme-de-la-creme of Kentucky Bourbon barrels, I can't help but wonder if Western Spirits was shopping the clearance section of the distiller's warehouse. I have nothing positive to say about Bird Dog 10 Year. Lord knows I tried.  Simply put, this was just offensive. If there was ever anything worthy of a Bust rating, Bird Dog 10 would be the poster child.