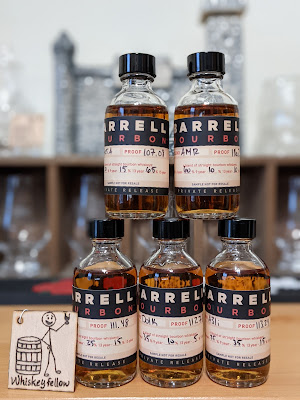 Everyone wants their own private barrel. Maybe you own a liquor store. Perhaps you run a restaurant. Or, perchance you are part of a local whiskey club. The idea of having something exclusive that nobody else will ever have is tempting - nay, romantic.
What if, instead of just randomly taking samples and selecting the best (or rejecting them all), you had more control and had a way to predict how the barrel would taste based upon a customized recipe?  You can do that if you know the right people.
In this case, the "right people" are from Barrel Craft Spirits. They've just released something called the Barrell Private Release Series. This isn't your typical barrel pick program. Instead, you'll get a customized, blended recipe of Bourbons sourced from Kentucky, Indiana (MGP), and Tennessee (Dickel). There are four different ages involved:  5-year, 9-year, 13-year, and 15-year.  That results in 49 different options by the time all is said and done. You'd be buying a barrel's worth, typically yielding between 150 and 180 bottles.

"Known best for sourcing and blending award-winning, unique aged spirits at cask strength, BCS' Private Release Series is an exercise in micro-blending and variations on a theme. It affords the team the opportunity to showcase its blending expertise while maintaining a single barrel-like scale controlled entirely by hand and by palate." - Barrell Craft Spirits

Proof varies from batch to batch, but retail is universal at $109.99 per 750ml. For any particular release, you can get information from Barrell's Private Release Series website about the recipe and, if the batch has already been purchased, where you can buy a bottle. This is something Barrell plans on maintaining.
Barrell provided me with five samples in exchange for no-strings-attached, honest reviews on each. That's a whole lot of opportunity to #DrinkCurious. I arranged these the way I would arrange many other tastings - I went from lowest-to-highest proof. 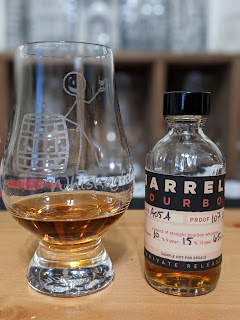 Up first is Batch A05A.  Bottled at 107.08°, the recipe consists of 10% 5-year, 10% 9-year, 15% 13-year, and 65% 15-year. The goal was to showcase older, dusty, and oxidized notes that are not normally found in blends.
Appearance:  In my Glencairn glass, this batch created a thin rim that generated medium, slow legs to drop back to the pool. It was the color of a classic orange-amber.
Nose:  This Bourbon was very fragrant. It started with toasted oak and coconut, then mint, orange peel, maple, and a mineral quality that smelled like Dickel. When I inhaled the vapor through my lips, butterscotch was everywhere.
Palate:  The mouthfeel was full-bodied and creamy. I found the front fruity with berries and plum. Caramel joined before it moved to mid-palate, where dark chocolate and butterscotch took over. On the back, I tasted oak, cinnamon, and nutmeg.
Finish:  There was a lighter initial hug, but the first thing that stood out was the typical Dickel Flintstones vitamins. Cinnamon and plum followed, along with vanilla, oak, and black pepper. As I continued to sip, the finish grew longer and longer.
Bottle, Bar, or Bust:  For the most part, I found Batch A05A to be enjoyable, and there was plenty of flavors, but I could have done without the Dickel signature finish. For $110.00, this one gets a Bar rating. See for yourself if the Flintstones vitamin taste is your jam. 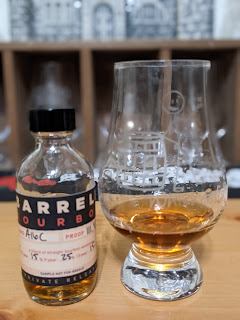 The second selection is Batch A16c.   The recipe is 45% 5-year, 15% 9-year, 25% 13-year, and 15% 15-year and bottled at 111.48°.  The intent was to highlight a fresh, corn-forward sweetness.
Appearance:  Batch A16c presented as a lighter bronze-amber. A medium rim formed, which led to thick, wavy legs to fall back to the pool.
Nose:  Aromas of caramel, cherry, nutmeg, and roasted corn were easy to pick out. When I drew a whiff through my mouth, sweet corn and vanilla raced across my tongue.
Palate:  The mouthfeel was oily and offered a medium body. On the front, I tasted caramel and sweet corn. The middle comprised of vanilla and pecan praline, while the back flavors were rye spice, dry oak, and cherry.
Finish:  A longer finish started with cinnamon red hots that, once it began to fade, gave way to oak, cherry cola, and vanilla.
Bottle, Bar, or Bust:  Missing from this batch was the Flintstones vitamins, which made me happier. It was also a simpler palate, with a nice balance of sweet and spice to keep things interesting. I could see this one being an easy seller, and convey a Bottle rating for it. Batch D01K was the third pour, and its components are 50% 5-year, 35% 9-year, 10% 13-year, and 5% 15-year. The blend is bottled at 112.78°. It was designed to feature the sweetness and earthiness of Kentucky Bourbon.
Appearance:  This one appeared as the color of caramel.  The medium rim fostered thick, slow legs that crawled back to the pool.
Nose:  Nutmeg was very forward on the nose, which then became cocoa. But I also smelled dark fruit, almond, and mint.  When I breathed in through my mouth, it was a vanilla bomb.
Palate:  When the liquid hit my palate, it was oily with a medium body. On the front, I sampled caramel, toffee, and corn. As the whiskey moved to the middle, it became herbal with walnuts and slightly bitter. The back was sweet tobacco leaf, cocoa, and cinnamon spice.
Finish:  Medium-to-long, the spicy finish showcased cinnamon red hots, vanilla, and toasted oak.
Bottle, Bar, or Bust:  I didn't find D01K overly exciting. The bitterness on the middle was a bit off-puting. I can understand how some folks go for that, but that's not my thing. Unfortunately, this batch takes a Bust. 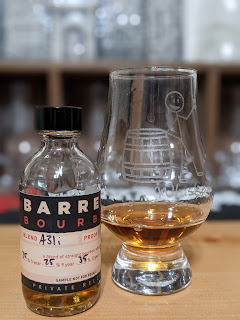 Fourth in line was Batch A31i. This was a blend of 25% 5-year, 25% 9-year, 35% 13-year, and 15% 15-year Bourbons, and bottled at 113.24°. Designed to emphasize Indiana Bourbon, BCS went for a chocolatey, chalky experience.
Appearance:  This batch looked like raw honey. It produced a heavy rim and sticky legs that didn't really go anywhere.
Nose:  A serious oak aroma began the trek, with chocolate, cherry, and spearmint bringing up the rear. When I inhaled through my lips, a wave of caramel coated my tongue.
Palate:  I found the mouthfeel to be silky with a medium body. The first thing I tasted was dark chocolate and caramel, almost like a Cadbury bar. On the middle, things got nutty with roasted almond and hazelnut.  The back was an interesting combination of nutmeg, caramel (again), and toasted oak.
Finish:  The finish lasted several minutes.  Clove, cocoa, toasted oak, chili powder, and hazelnut strangely complimented each other.
Bottle, Bar, or Bust:  Batch A31i was like eating a chocolate bar, a cross between the Cadbury bar, a Hershey's with Almond, and Nutella.  The warmth of its finish was well-rounded and made sense.  I really enjoyed sipping this one, and I'd be crazy to offer anything but a Bottle. 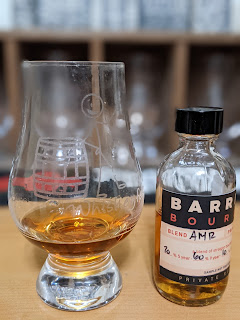 Last up is Batch A14R, created for a strong, high-rye character.  Bottled at 116.2°, the blend was 20% 5-year, 60% 9-year, 10% 13-year, and 10% 15-year.
Appearance:  With a micro-thin rim that ended with a curtain falling back to the pool, this Bourbon was the color of dull, faded copper.
Nose:  Light mint, cinnamon, and oak stuck my olfactory senses. The unexpected quality was a waft of maple syrup. That's not something I'd normally find in a high-rye mash. When I breathed in the vapor through my mouth, vanilla mint caressed my palate.
Palate:  Thick and full-bodied, the initial flavors consisted of vanilla and toasted oak. As the whiskey moved to the middle, I tasted black pepper, caramel, and orange peel. Clove, rye spice, and oak made up the back palate.
Finish:  The medium-length finish was spicy with rye, dry oak, barrel char, and mint.
Bottle, Bar, or Bust:  Batch A14R was simple and tasty. The maple syrup on the nose threw me for a loop. The spiciness this blend targeted did not disappoint, and was enjoyable. Is it worth $110.00?  I find myself leaning at a Bar rating for this one.
Final Thoughts:  And that's a taste of what you can expect from the Barrell Private Release Series.  I was fascinated by two things: the lack of any numbness on tingling despite the higher proofs and how only the A05A tasted of Flintstones vitamins despite all five having a Dickel component.  My favorite by a mile was A31i. This was an interesting tasting for me and the ratings were all over the spectrum, which kept things fun. Cheers! 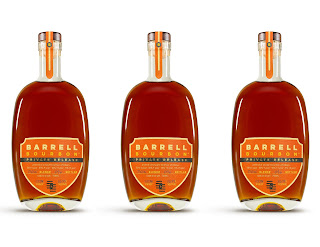 My Simple, Easy to Understand Rating System
Posted by Whiskeyfellow at 6:25 AM No comments: