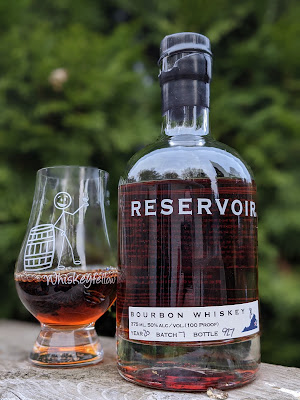 I respect distillers that do things differently and try to make a whiskey their own. Oh, I may not enjoy the whiskey itself, but I have a ton of respect. There's something to be said for risk-taking, and I mean risk beyond simply opening up a distillery.

Enter, stage left, Reservoir Distillery of Richmond, Virginia.  Founded in 2008 by childhood friends Jay Carpenter and Dave Cuttino, they wanted to do something unique. They source their grains from farms within a 50-mile radius from the distillery. They use quarter-casks (13-gallons) instead of standard 53-gallon barrels and apply a proprietary alligator char to them.

But, that's not what's really divergent. The distillery only makes single-grain whiskeys. Their Bourbon is 100% corn. Their Rye is 100% rye. Their Wheat Whiskey is 100% wheat. Everything from the mashing to the bottling is done in-house. Co-Head Distillers Mary Allison and Nick Vaughn utilize a pot still to create their elixir after open-top fermentation runs more than a week. Reservoir's wares are distributed in VA, DC, DE, FL, GA, IL, MD, PA, and SC.

How did Allison and Vaughn do?  The only way to know for sure is to crack it open and #DrinkCurious. Let's get that done, shall we?

Appearance:  This is a two-year Bourbon that is aged in quarter casks. I had to be mindful of that when it looked at it in my Glencairn glass. The photo above has not been manipulated. That deep, dark mahogany in the picture is the same thing as what's in my glass. I was shocked. I've seen plenty of small-barrel whiskeys before, and I don't recall seeing anything this dark.  It created a thicker rim which gave way to medium-thick legs that slowly fell back to the pool of liquid sunshine.

Nose:  A fairly uncomplicated nose of corn, chocolate, and cherry pie filling were all I picked up. The hardest thing to identify was the latter. It wasn't cherry, it wasn't dried cherry. It was the stuff you get out of a can and use your fingers to scoop out every last bit. When I inhaled the vapor through my lips, I tasted vanilla.

Palate:  Initially, the body started thin, but it became more viscous with additional sips. Despite the age, despite the 100% corn content, there was no ethanol punch. On the front, flavors of coffee and tobacco leaf gave a spiced opening. As the whiskey crossed my mid-palate, I found vanilla and coffee, which was almost a latte experience. Then, on the back, black pepper and oak drove everything home.

Bottle, Bar, or Bust:  As I began, I have a ton of respect for folks who take chances and do things differently. Reservoir Distillery definitely does that. I was impressed with the color of a two-year Bourbon. I really enjoyed the nose, despite how simple it was. The palate was decent, but weighed heavy on spices and lacked any sweetness, which is strange considering the mashbill, however, it didn't seem unbalanced. This is priced at the higher echelon of craft whiskey, and my recommendation is to try this one before you buy it. As such, it takes my Bar rating. Cheers!